Investors will have another packed schedule of corporate earnings reports to consider, alongside the latest monthly jobs report from the Labor Department.

The April jobs report will likely be the latest positive data point underscoring the U.S. economic recovery. According to Bloomberg data, consensus economists expect to see that non-farm payrolls grew by 978,000 for the month, accelerating from March’s gain of 916,000 and representing the biggest rise since August 2020. The unemployment rate likely fell to 5.7% from 6.0% in March, or to the lowest level since March 2020. And the labor force participation rate probably rose 0.2 percentage points to 61.7% as more individuals came off the sidelines and returned to work or job searches.

Some economists are expecting even stronger gains. Nomura economist Lewis Alexander said this Friday’s report will show “a monster U.S. payroll number,” with job gains coming in at well over 1 million.

“Reopening activity spurred increased spending on leisure and hospitality over March and early April based on the BEA’s [Bureau of Economic Analysis’] weekly credit card data, likely translating into a strong increase for food services and accommodation employment, although we see some uncertainty over how quickly increased demand will result in employment gains,” he said in a note Friday.

Others agreed that the consensus estimate for payroll gains may be too conservative considering the acceleration of the national vaccination program and velocity of the economic reopening over the past month. And many populous cities and states have recently signaled their intents to lift even more restrictions in the near-term, with California setting a full-reopening target of June 15, and New York City aiming to fully reopen July 1. This could stoke even more hiring in the lead-up.

“It seems that the one question we have fielded multiple times over recent days about payrolls relates to the prospects for a near-2 million gain. The reality is we cannot outright discount that,” RBC Capital Markets economists wrote in a note Friday. “Many of the metrics we tend to use for forecasting payrolls are out of sorts at the moment thanks to the aggressiveness of the reopening. So what we would say is this: Whether a 2 million gain happens or not, the clawing back of those people sitting on the sidelines seems poised to continue in earnest over the coming months.”

For investors, the April payrolls report will likely also serve as another piece of data showing the economy made strides toward achieving the Federal Reserve’s target of “substantial further progress” in the recovery, after which policymakers have signaled they would be willing to start discussions to roll back crisis-era monetary policy support. Still, Fed Chair Jerome Powell has said he wanted to see sustained improvement in the economy and a “string of months” of 1 million or more job gains before discussing a policy pivot.

But when asked what might constitute a “string of months” during his last press conference on Wednesday, Powell declined to offer a firm number.

“I can tell you what it’s not. It’s not one really good employment reading, which is what we got in March. We got close to a million jobs in March and a very strong labor market reading. And I was just suggesting that we’d want to see more like that,” Powell said during his latest press conference on April 28. “We’re eight and half million jobs below where we were in February of 2020, and that doesn’t account for growth in the labor force and growth in the economy, that trend we were on. So, we have, we’re a long way from our goals, and we don’t have to get all the way to our goals to taper asset purchases. We just need to make substantial further progress. It’s going to take some time.”

Ride-hailing giants Uber (UBER) and Lyft (LYFT) will be among the major companies to report quarterly earnings results this week.

The reports come following weeks’ worth of estimates-topping first-quarter results from a host of companies across sectors. As of Friday, 86% of S&P 500 companies had beat consensus estimates on earnings per share for the first quarter, according to FactSet data. And if this percentage holds through the end of earnings season, it will mark the highest beat rate since FactSet began tracking the data in 2008.

Both Uber and Lyft could see some upside as beneficiaries of the economic reopening this year, with vaccinated individuals more apt to return to traveling and ride-sharing. Both companies have targeted achieving adjusted EBITDA profitability by the end of this year, aided by a pickup in demand and more prudent cost-cutting measures.

“We continue to like Lyft as a mobility pure play, as ride-share recovers in US&C [the U.S. and Canada], driven by vaccination,” JPMorgan analyst Doug Anmuth said in a note Friday. “On the 1Q call we will be focused on commentary around the cadence of recovery in ride-share, and more color on the incentives and promotion spend required to increase driver supply.”

Anmuth also sees Uber getting a boost from the ride-hailing demand recovery, and added that momentum in Uber’s food and drink delivery business should continue to perform strongly. Delivery gross bookings, which include Uber Eats, exceeded mobility gross bookings in each of the last three consecutive quarters, as customers opted for at-home dining over going out to restaurants. Strong first-quarter results from smaller competitor Grubhub (GRUB) last week suggested that strength would likely continue. Still, Uber’s delivery business remains unprofitable, though CEO Dara Khosrowshahi said in February he believed it would post an adjusted EBITDA profit by the end of this year.

Both companies, however, are exposed to regulatory risks, especially around potential classification of their drivers. Both Uber and Lyft sold off last Thursday after U.S. Labor Secretary Marty Walsh told Reuters he supported reclassifying most gig workers as full-time employees rather than as contractors. Uber and Lyft have previously said such a move would increase costs for the companies to a detrimental degree, and would force them to hike prices for riders.

A Supreme Court decision in the U.K. — one of the company’s most lucrative international markets – earlier this year already dealt a blow to Uber on this front. It required the company to reclassify drivers as “workers” entitled to benefits like a minimum wage, holiday and sick pay, and rest time.

“While our 1Q Mobility EBITDA has upside, margins will compress 2Q-4Q due to incentives and UK-related costs, and could possibly push our breakeven timeline from 3Q21 to 4Q21,” Anmuth said.

Sun May 2 , 2021
“On the advice of the Centers for Disease Control and Prevention, the Administration will restrict travel from India starting immediately,” White House press secretary Jen Psaki said in a statement on Friday. “The policy will be implemented in light of extraordinarily high COVID-19 caseloads and multiple variants circulating in the […] 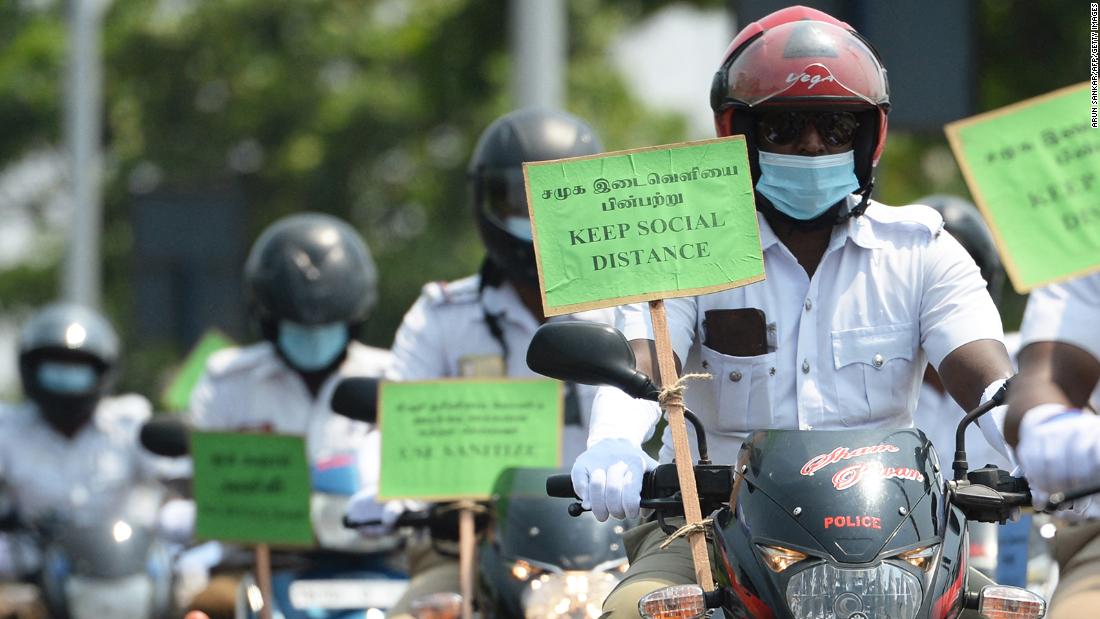