While the private sector is held to a higher standard, rules from the Governmental Accounting Standards Board have enabled Illinois to engage in reckless financial practices that harm taxpayers and the state’s economy.

Bad accounting has helped Illinois politicians avoid balancing the budget for 20 years, despite a constitutional requirement to pass a balanced budget each year. Government accounting standards that fail to offer transparency and accuracy in financial reporting have also contributed to the state’s $260 billion pension crisis, the primary reason Illinois has the lowest credit rating any state has ever received.

The Governmental Accounting Standards Board has proposed changes it calls “improvements” to the accounting standards for governments. However, watchdog groups such as Truth in Accounting have criticized the proposed changes and urged the adoption of more stringent standards that would require governments to balance their budgets the way most businesses are required to do. Illinois has grown accustomed to using lax accounting methods to hide its budget deficits, racking up debt year after year. The state’s taxpayers would benefit from tougher standards that impose fiscal discipline.

The standards board sets the accounting standards for state and local governments. While many private sector companies are required by law to use accrual-based accounting, which recognizes income when it is received and bills when they become due, the board uses modified accrual accounting. Intended as a hybrid between accrual and cash-based accounting, the modified system effectively operates as cash-based accounting, in which revenues are counted when they are received but expenses are not counted until they are paid. This creates a distorted view of budgets and enables governments to overpromise – making financial commitments they have no way of keeping.

Imagine homeowners “balancing” their monthly budget by refusing to pay their $100 electric bill, instead counting it toward next month’s expenses just because the bill went unpaid. That is the type of irresponsible financial management cash-based accounting allows. These reckless budget practices have helped push Illinois into a fiscal abyss while also contributing to numerous other problems plaguing the state.

Current board standards enable governments to use confusing accounting methods to shield significant problems from the eyes of taxpayers rather than promoting transparency in the use of public funds. Truth in Accounting, an independent financial watchdog, said these methods allow governments to “ignore long-term liabilities, such as the pension and health care promises they made to their government workers.”

Truth in Accounting is leading an effort to push the standards board to adopt stronger standards and urging the public to write to the board during the open comment period, which runs until the end of February. It wants the board to adopt what it calls FACT-based accounting – Full Accrual Calculations and Techniques. Using this method “would mean that the financial statements used for budgeting must show expenses as they are incurred, especially when a government makes a promise to pay in the future.”

Truth in Accounting CEO Sheila Weinberg recently highlighted an example of how deceptive financial practices mislead the public and hide the true fiscal state of public entities. Weinberg pointed to a Chicago Sun-Times 2019 headline about the Chicago Public Schools that said, “CPS finishes year with budget surplus,” when CPS had a loss in excess of $750 million and net liabilities over $14 billion. The “surplus” was only in the general fund and was calculated using cash-based accounting.

The board standards lack the stringency necessary to keep public sector budgets operating in a responsible manner. Citing board standards, the Financial Times concluded, “Politicians are encouraged to lowball both the value of public assets and the cost of promises made to public-sector workers. It’s a recipe for poor governance, if not outright corruption.”

Illinois’ unfortunate triple crown of lax accounting practices, poor governance and corruption drag down its economic growth, contributing to residents leaving the state. Unsurprisingly, recent research from the University of Illinois-Chicago found the state to be the second-most corrupt in the nation.  Worse, that corruption comes with a hefty price tag. Research from the nonpartisan Illinois Policy Institute found the state loses $556 million each year due to corruption’s stifling effect on economic growth.

In the 20 years since the state’s last truly balanced budget, its deficits have increased, taxes have increased, and population has declined. In fact, the most recent data show Illinois is hemorrhaging residents, suffering the largest population decline of any state during the past decade. The state is also in danger of becoming the first to have its bonds hit junk status. The state’s precarious finances left it unprepared for economic turmoil like the coronavirus pandemic.

While no one could have foreseen the economic calamity caused by COVID-19, few states were less prepared to handle a downturn than Illinois. Illinois has only enough money in reserve to fund the government for about 15 minutes, a sobering reminder of just how poorly politicians have been managing the state’s finances.

The poor fiscal state of Illinois was also on display when it borrowed funds through an emergency program created by the Federal Reserve called the Municipal Liquidity Facility. The program was designed to allow state and local governments access to credit to manage revenue delays and losses, with $500 billion in funding available to all 50 states, large cities and counties, and certain other municipal entities until Dec. 31, 2020. Yet only two government bodies ended up using this emergency funding resource: the Metropolitan Transportation Authority of New York and the state of Illinois. Illinois borrowed $1.2 billion in June then requested an additional $2 billion in December after voters in November rejected Gov. J.B. Pritzker’s progressive income tax.

Illinois sought to use this program because the state is in such poor fiscal condition that the Municipal Liquidity Facility program offered borrowing opportunities at better rates than the state could find in the traditional bond market. Crain’s Chicago Business explained: “Investors have long punished Illinois for its fiscal woes, boosting the penalty the state pays to borrow from the bond market. Illinois 10-year general obligation bonds yield about 2.77 percentage points more than benchmark debt, the highest of the 20 states tracked by Bloomberg.”

The purpose for the liquidity borrowing, according to Pritzker, is to help the state manage its enormous bill backlog, another long-running problem enabled by cash-based accounting. The bill backlog is essentially a “carried deficit” from year to year. Since Illinois counts an expenditure only when it is paid, the state can carry that expense into future fiscal years without counting it toward the current fiscal year’s balance. Under accrual accounting, bills would be counted in the fiscal year in which they were incurred, regardless of when they were paid. Essentially, Illinois uses this trick as a crude form of borrowing that ends up pushing costs into the future with interest. This borrowing and debt manipulation is part of a bad budget process that hides real deficits from taxpayers and allows the state to claim balanced budgets even though they are not. Illinois’ current bill backlog is around $5 billion even after payments have been made as a result of this latest short-term borrowing.

Illinois continues to use all available gimmicks and federal handouts to keep its fiscal boat afloat. The governor has said he is “thrilled” control of the U.S. Senate has changed hands, increasing the prospect of a federal bailout of state governments.

Illinois taxpayers should question why governments in charge of allocating their money are held to such weak accounting standards by the Governmental Accounting Standards Board. Taxpayers should further question why their elected officials continue to use these methods to hide the state’s true financial condition. Until Illinois changes its poor practices and adopts better accounting standards, Illinoisans can expect to keep seeing smoke-and-mirror accounting tricks by politicians.

Illinois is perhaps the most glaring example of why governments need to be held to higher standards than the ones the board uses. Illinois must reverse these troubling trends by adopting serious reforms that directly address the problems facing the state. That is the only way to place Illinois on a sustainable path forward.

Sat Feb 20 , 2021
SINGAPORE — Singapore on Thursday opened a new international meeting venue near Changi Airport, specially designed to bring more travelers in but keep COVID-19 out. The “bubble” facility, called [email protected] and believed to be the first of its kind, is part of the city-state’s strategy for reviving its pandemic-hit travel […] 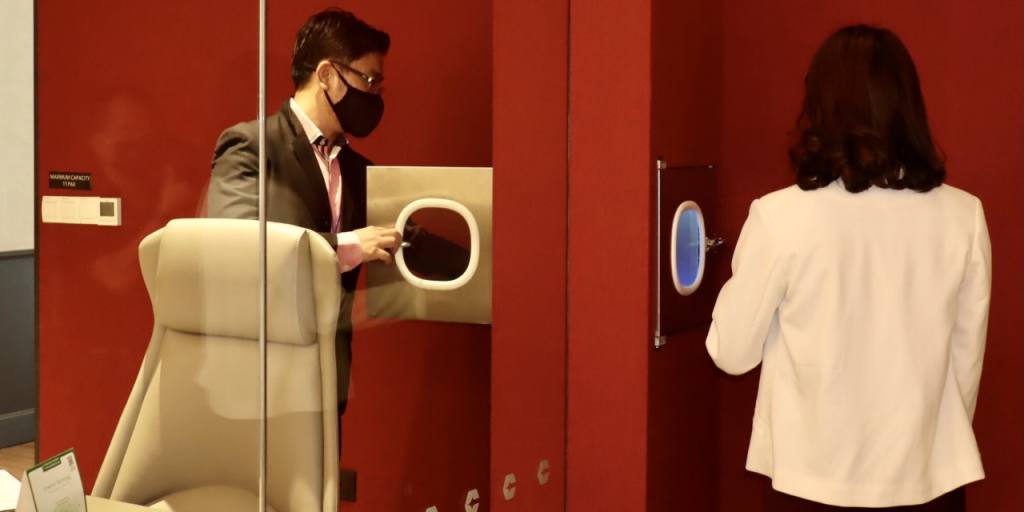