The last three years have been a time of sweeping changes throughout the elite youth soccer landscape. For Utah Royals FC Arizona, this especially rings true, as the club’s recent announcement that they will be transitioning from Girls Academy to ECNL Girls next season marks their third league change in four seasons.

Additionally, their namesake NWSL club, Utah Royals FC, dissolved at the end of 2020, transitioning all their player-related assets to the expansion Kansas City NWSL team, albeit with the option for Utah Soccer LLC to bring back the club as early as 2023.

Despite all these changes, Utah Royals FC Arizona has had unquestionably one of their best seasons in club history. Of their six Girls Academy teams, five sit firmly at the top of the Southwest Conference, with the U-13, U-14, U-16 and U-17 teams all conceding less than a goal per game.

Their success has been noticed at the top-level of the U.S. Soccer ladder, as the club has had standouts Bella Leonard and Jae Pallas invited to the U-18 U.S. Women’s National Team virtual meeting, with Anna Castenfelt being invited to the U-17 virtual camp.

Utah Royals FC Arizona took on their club name when they joined the U.S. Development Academy in the 2018-19 season, relatively late in the now-defunct league’s history. When the league came to a halt at the conclusion of the 2019-20 season, the club had to find a new league to continue competition for the 2020-21 season.

“For me, as the director of our girls program we wanted to ensure we kept what is important to us—which is quality of training and our staff, our kids, and a league that continues to challenge our players,” Academy Director Tiffany Roberts said. “We thought, there are alot of clubs staying in the Girls Academy this year and there were so many shifts going on with other clubs jumping-some staying—the ECNL continuing to figure out how to navigate the changes with the Development Academy collapse; seeing how the changes played out seemed to be fair.”

This success has come in the Girls Academy’s Southwest Conference, which is very similar to the 2019-20 Development Academy Southwest Conference. Seven of the 13 other clubs from the DA joined GA along with the Utah Royals, with two discontinuing their girls programs and only three heading directly to the ECNL.

Playing in the Southwest Conference during the pandemic presented some unique issues for the club, despite Arizona being one of the least restrictive states in terms of youth sports. All but three members of their conference play in Southern California, where players were not even allowed to practice as a team for almost the entirety of 2020.

“I do believe being able to train and having less restrictions in Arizona helped our players from a consistency standpoint and not skipping a beat with regard to competing.” Roberts said. 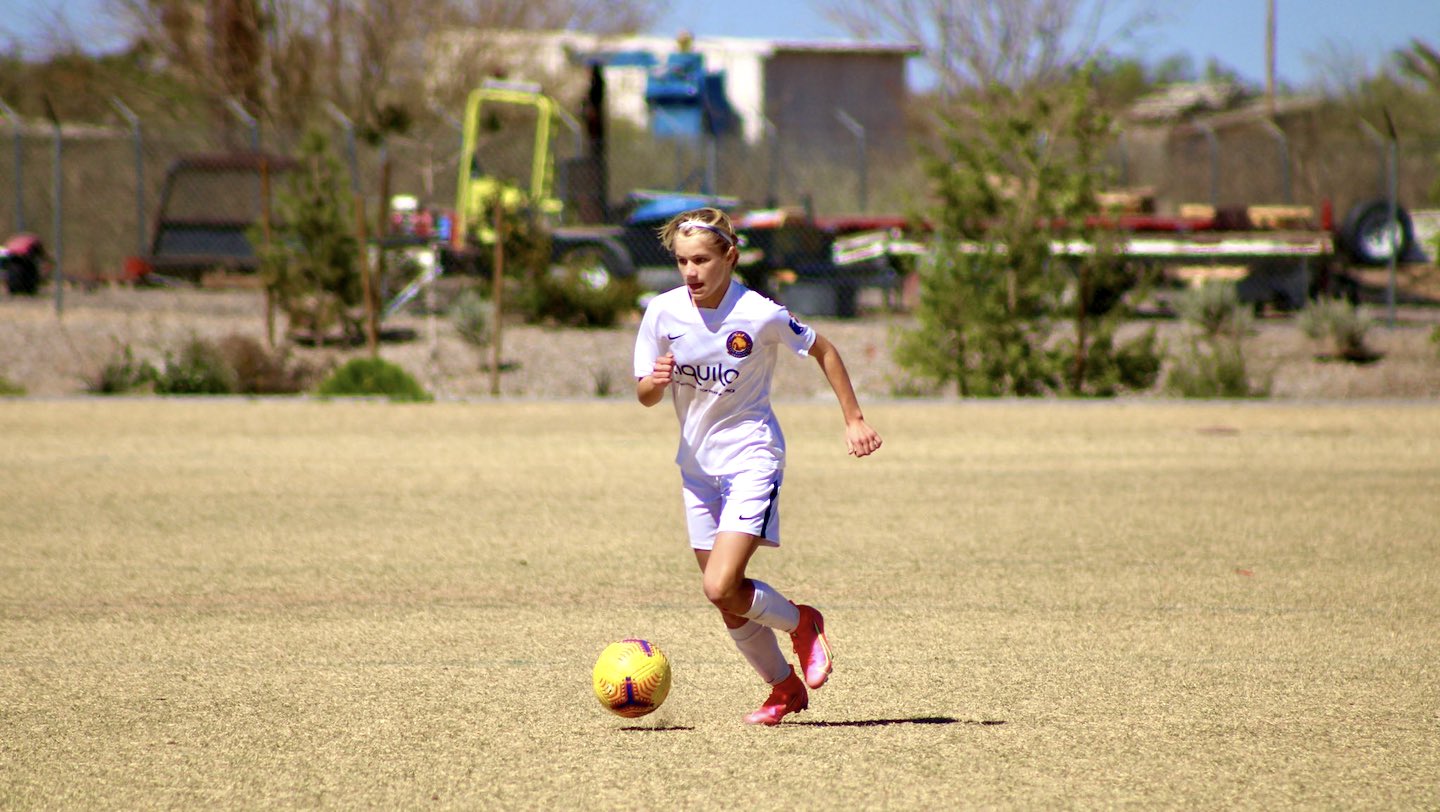 While the benefits of playing in Arizona are certainly tangible, one of the major drawbacks is the unbalanced schedule for the club that has added lots of travel later in the season. The club played the first half of their schedule exclusively at home, and now have to travel to California or Nevada for eight of their nine remaining match days, only staying near home for “road” games against SC del Sol, the only club in their conference also located in Arizona.

In addition, the club participated in the recent Girls Academy Florida event and are participating in this weekend’s Girls Academy Texas event. Between March 27 and June 6, the teams are spending 6 out of their 11 weekends out-of-state. Despite this, the Utah Royals have stepped up to the challenge.

“We are used to traveling as the Southwest is made up of mostly California teams,” Roberts said. “We know we have to travel and our kids have really adjusted to that aspect. The away trips have been less ‘fun’ because of the COVID aspect as we have not been able to do a lot of team travel like normal but I think our kids embrace the challenges of traveling and playing.”

Starting in the 2021-22 season, Utah Royals FC Arizona will play in the ECNL’s Southwest Conference, joining with other GA Southwest Conference clubs Legends FC and Beach FC. These additions will expand the conference to a whopping 17 teams, including some of the best clubs in the country. In fact, the Utah Royals will be one of 11 clubs in the Conference ranked in SoccerWire’s most recent Top 100 Girls Soccer Clubs, with four of their opponents being named in the top 15.

“From an overall soccer perspective, we need to be pushed and we need to figure out how to do that,” Roberts said. “Some clubs from the Southwest division jumped from the DA to the ECNL right away, and they were good clubs, I don’t think anyone would dispute that. They’re consistently the top teams in the country, and we want to play those clubs. That’s how Arizona as a state gets better, that’s how our kids are going to be able to grow.”

For the remainder of the 2020-21 season, the club is focused on continuing their successes in Girls Academy, especially in the older age groups.

“Our oldest groups are the ones where we want to, and focus more on, results and how we do, where they are and how we end up at the end of the year,” Roberts said. “[For] our [U]-19s and our [U]-17s, those are the two groups for me that, as you look at it from our club standpoint and from a success standpoint, how are they doing [and] how [will] they do in the playoffs? So we’re obviously hoping that they go far and do well.”

As for a name change—given the fact that their namesake club is on hiatus—don’t expect one anytime soon.

Why is it so difficult to create covid-19 travel bubbles?

Tue May 4 , 2021
They may prove a boon for sagging economies, but they are not for the faint-hearted Explaining the world, dailyThe Economist explains May 4th 2021 MANY COUNTRIES rely on tourism and business travel, but few sectors have been as badly damaged by the pandemic. In 2020, travel-industry revenues across the globe […]