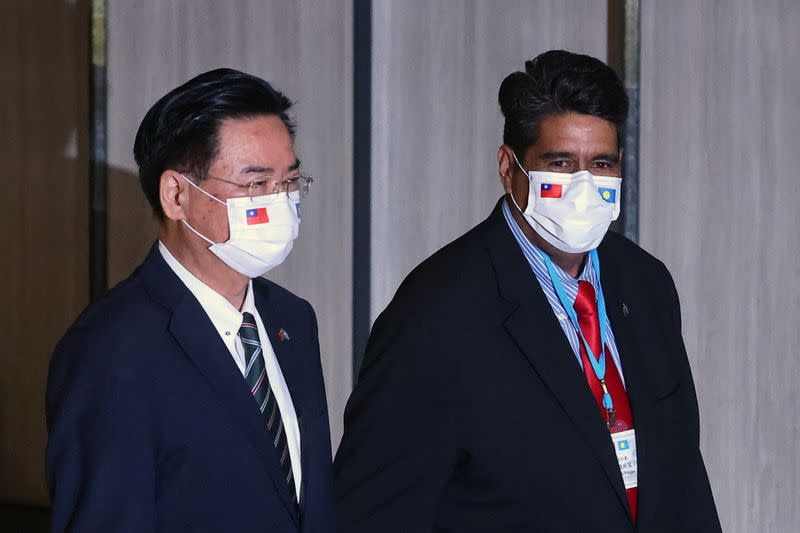 TAIPEI (Reuters) – Palau is looking forward to opening a travel bubble with Taiwan to help its wrecked tourism industry recover, its president said on Tuesday, offering an economic boost to the strategic Pacific region where China is tussling for influence with loans and aid.

Palau, one of only 15 countries to maintain formal diplomatic ties with Chinese-claimed Taiwan and also a staunch U.S. ally, all but closed its borders last year to keep COVID-19 out despite the economic cost, and has never recorded a case.

Meeting Taiwan President Tsai Ing-wen in Taipei ahead of Thursday’s opening of the travel corridor, Palau President Surangel Whipps Jr. said that with U.S.-provided vaccines being rolled out in his archipelago nation of fewer than 20,000 they were ready to play host to Taiwanese.

“We’ve gotten a shot in our arm with the vaccine; by allowing the tourists to come in you give us a shot in the arm for our economy,” Whipps said.

“And that’s very important because as you know many of our people are out of work because we’re very much dependent on tourism.”

Taiwan has the pandemic well under control at home with only 33 active cases, giving Taipei the confidence to allow the bubble. Palau is less than four hours by plane from Taiwan.

Whipps’ trip coincided on Monday with renewed Chinese air force activity near Taiwan, after Beijing rebuked Washington for the presence of the U.S. ambassador to Palau, John Hennessey-Niland, as part of the president’s delegation.

Speaking earlier on Tuesday, the ambassador said it was a “special privilege” to be in the delegation.

“I know that here in Taiwan people describe the relationship between the United States and Taiwan as ‘real friends, real progress’. And I think that description applies to the three countries – the United States, Taiwan and Palau,” he added.

The Pacific is the site of a diplomatic tug-of-war between Beijing and Washington, and in 2019 China snatched away two of Taiwan’s allies there, Kiribati and the Solomon Islands.

The United States has accused China of practicing “debt trap diplomacy” in the Pacific, which Beijing denies.