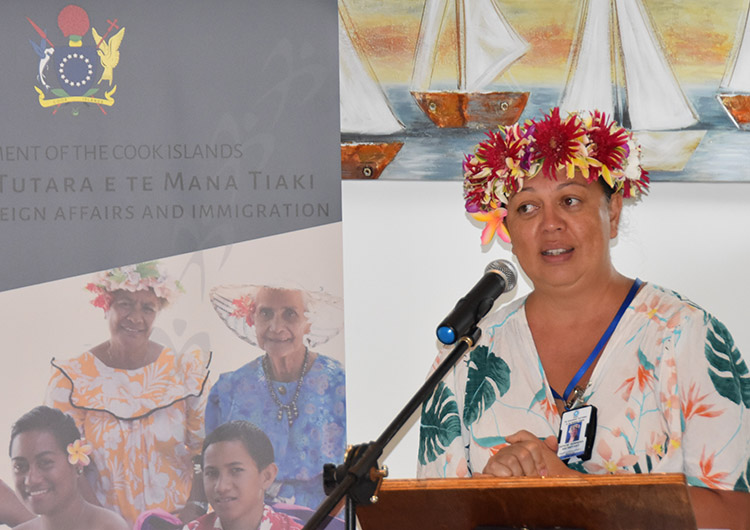 The Ministry of Foreign Affairs and Immigration (MFAI) Secretary, Tepaeru Herrmann, speaking at the PACER Plus consultation held at the Muri Beach Club Hotel yesterday. 21022410.

Timeline on travel bubble weeks away
Government says work is ongoing in anticipation of two-way quarantine-free travel with New Zealand, however an announcement with specifics on when that will happen is weeks away.

Last December, New Zealand and the Cook
Islands agreed to open a quarantine-free two-way travel bubble by the end of
March.

With less than five weeks remaining on that
initial timeline, officials from across government are working to put in place
arrangements that will allow seamless travel between both countries

But obstacles remain towards achieving that
goal.

Mass testing for Covid-19, a requirement cited
by Prime Minister Mark Brown, won’t be in place until April, government has
said.

And contact tracing is still under development
with additional functionality to align the system with New Zealand’s currently
being added to the existing CookSafe system.

“Te Marae Ora is finalising its work on
testing and surveillance, recruitment of essential health workers, as well as
contingency and health response planning. Government will be in a position to
advise on timelines once progress on the health readiness work has materialised
in the next few weeks.”

After a series of delays, a real-time
polymerase chain reaction (PCR) laboratory – which will permit rapid testing in
high numbers – is expected to be in operation at Rarotonga Hospital in April.
The contact tracing system is also under development with completion expected
in the coming weeks.

The latest statistics provided by the Cook
Islands Chamber of Commerce, which is overseeing development of the system,
indicate between 100 to 150 CookSafe QR codes are being distributed each week.
Nearly 8000 have been given to residents so far.

Tag-ins have varied greatly, with 5000-8000 QR
scans being made per week. Over 700 scanners have been distributed to local
businesses, however not all are being used as some have been given to tourism
properties that are currently sitting vacant. New scanners are being registered
at a rate of eight to 10 per week.

The Chamber of Commerce is also overseeing
efforts to modify the existing system with Bluetooth functionality, which will
make it compatible with NZ’s Covid Tracer app.

While the existing QR-code based CookSafe
system will serve residents without access to a smartphone, the new system –
which has been dubbed CookSafePLUS – works with a smartphone app.

When downloaded, it will track the movements
of users and can determine if close contact was made with someone that has
tested positive for Covid-19.

Officials stressed the system will protect a
user’s privacy.

Sun Feb 28 , 2021
STEWARTVILLE, MINN. — Evening basketball practice is still a few hours away, which gives Will Tschetter enough time and daylight to feed the cattle grazing outside his home. He throws on rubber boots and sloshes through a mixture of snow, mud and water to fill and refill buckets of corn […]