The Job Market Is Tighter Than You Think 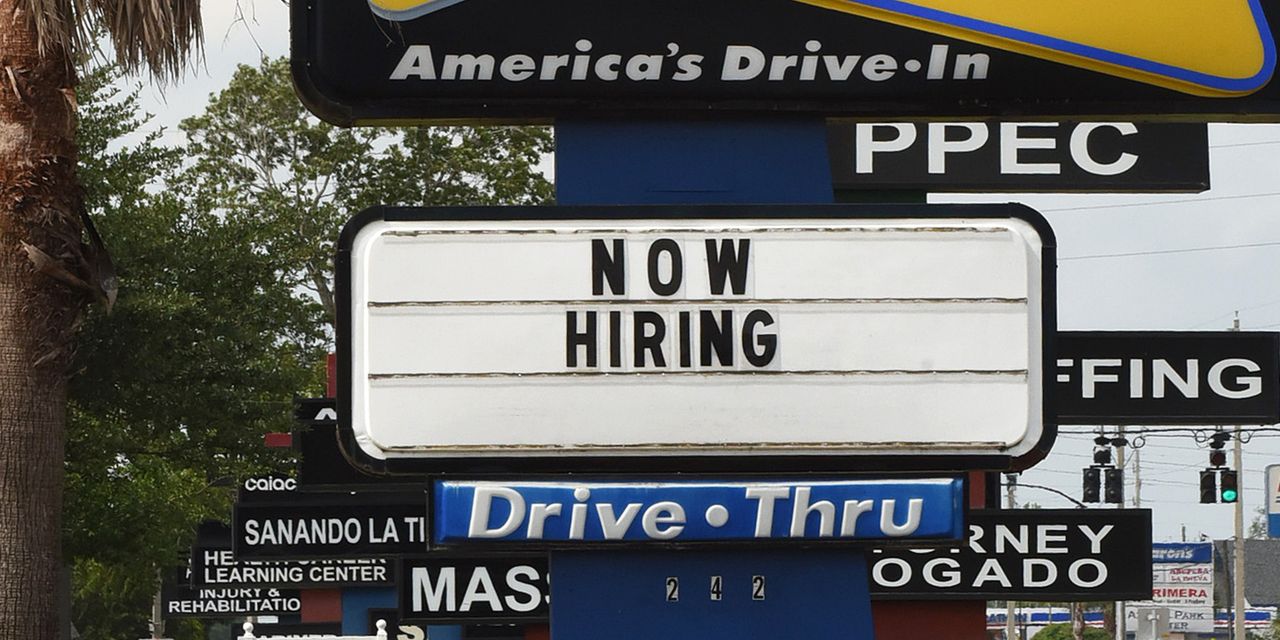 One set of numbers shows a labor market in dire straits. Total employment, despite March’s jump, is still down 8.4 million from its pre-pandemic peak, on a par with the worst point of the 2007-09 recession and its aftermath.

While the unemployment rate at 6% is lower than in 2009, it is above 9% when people not counted as unemployed because they dropped out of the labor force or were misclassified are added back, according to the Federal Reserve. In short, the labor market seems awash in slack, with job seekers swamping demand for workers.

Weirdly, that isn’t what a different set of numbers suggests. It shows a labor market starting to look, well, tight.

The Labor Department’s widely followed average earnings data are distorted by the disproportionate drop in low-wage work, so you need to consult measures that filter out these compositional effects. One, median wage growth as tracked by the Federal Reserve Bank of Atlanta, was 3.4% in February, barely changed from before the pandemic. Another, the Labor Department’s employment cost index, shows earnings up 2.8% in the fourth quarter of 2020, compared with 3% a year earlier. In 2010, both measures of wage growth fell below 2%.

Another sign of a tightening labor market: employers having trouble staffing up. In October 2009, businesses contacted for the Fed’s beige book, an anecdotal survey of economic conditions, overwhelmingly described the labor market as weak and wage pressures as subdued. By contrast, this month’s beige book reported shortages of drivers; entry-level, low-wage and skilled workers; child-care and information-technology staff; specialty trades; and nurses. “A homebuilder related that a landscaper had hired 20 laborers in early February and none showed up for work,” the latest beige book said. “One restaurant had begun offering $1,000 if workers stayed for at least 90 days.”

One shouldn’t put too much weight on anecdotes, but these are corroborated by data. Some 7.4 million jobs were open in February, above the pre-pandemic level. By contrast, job vacancies plummeted by half in 2007-09. A mismatch might be at work: sectors and regions unscathed by the pandemic want to hire, but the available workers are in the wrong place or have the wrong skills. Nonetheless, job vacancy rates are above pre-pandemic levels in most sectors, even leisure and hospitality.

So why does one set of numbers suggest the labor market is slack while another suggest it is tight? The discrepancy goes back to how this recession was fundamentally different from the previous one. The 2008-2009 financial crisis wiped out wealth and dried up credit. That sapped demand for goods and services as consumers stopped spending, and for workers as employers stopped hiring. By contrast, the pandemic clobbered both demand for workers as businesses closed, and the supply as workers withdrew to look after their children or their health.

As businesses reopen and stimulus checks juice sales, the demand for workers is now recovering, but the supply of workers, not so much. Adjusted for population growth, the labor force—people working or looking for work—is roughly five million smaller than before the pandemic.

Only a small share of those labor market dropouts want a job. Covid-19 is keeping most of the others out of the job market. A Census Bureau survey in late March found that 2.6 million people weren’t working because they were sick or caring for someone who was, and 4.2 million were afraid of catching or spreading the virus. (The two groups might overlap.) Indeed, fear might be the single most important difference between this recession and its predecessors. Millions are also caring for children, but it wasn’t clear how many were because of Covid-19 closures.

Stimulus checks and unemployment insurance, which has been extended to gig workers and made more generous, might also have kept potential job seekers on the sidelines. Several studies found that the aid didn’t depress employment last year because there were no jobs to be had. That may be changing as demand for workers ramps up.

All in all, while unemployment is indeed elevated, the job market isn’t as “loose” as the 8.4 million shortfall suggests. This partly undercuts the rationale for the aggressive fiscal and monetary stimulus injected into the economy: to fuel spending that soaks up all of those out-of-work people. Many simply aren’t available to be hired.

Have you lost a job because of the pandemic economy? Share your experience. Join the conversation below.

That is likely to change. As vaccination spreads, the virus-related obstacles to working should recede and economists expect the labor force to rebound. That is a Goldilocks scenario: historically high levels of employment and the sort of robust wage growth workers, especially the lowest-paid, were enjoying pre-pandemic.

But what if workers are slow to return? As stimulus-stoked demand for labor meets stubbornly reduced supply, the result should be even faster wage gains for those who do work, and one more reason to worry about inflation.