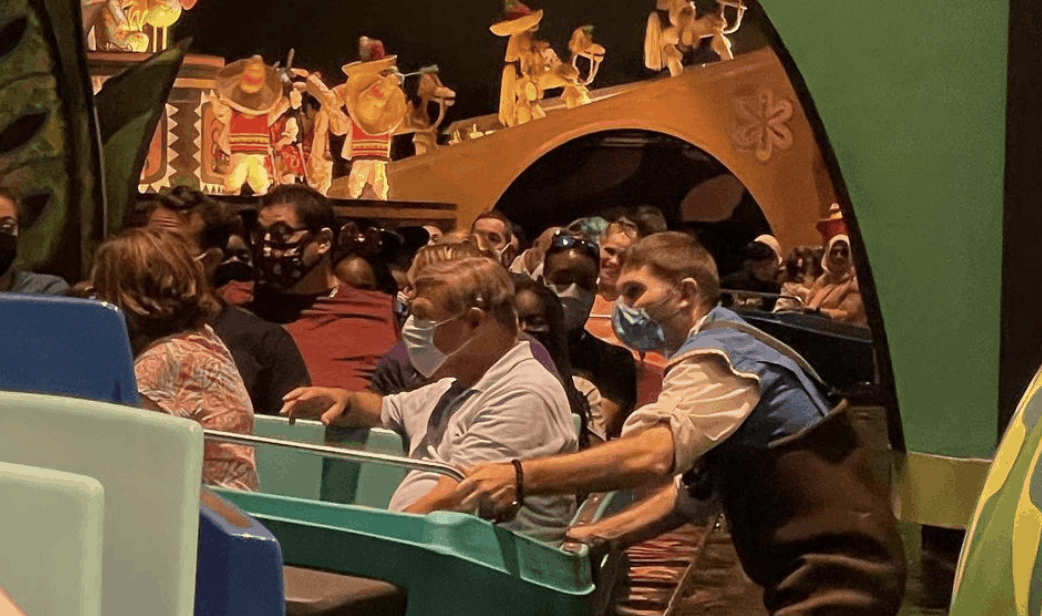 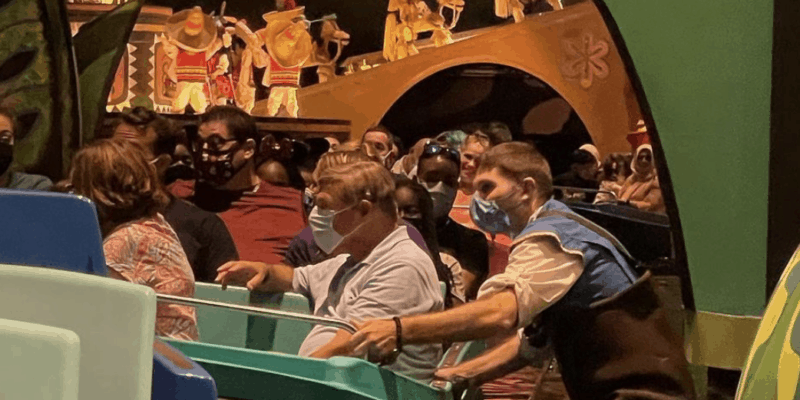 There are a number of songs where you only have to hear one verse and the song will be stuck in your head for the rest of the day — they are known as earworms. One of those songs is “it’s a small world”. Guests who go on the popular Disney attraction only need to ride it once, and they can find themselves humming the tune for the rest of the day.

However, some Guests visiting the Magic Kingdom on August 27 got stuck on The Happiest Cruise That Ever Sailed and listened to the song on repeat for an extended period of time. Some Guests were stuck on the attraction for well over an hour, although it does appear that the music was eventually turned off.

Guests shared on social media that “it’s a small world” had broken down and many were stuck on the ride for over an hour as Cast Members tried to evacuate everyone as safely and quickly as possible. Magic Park Guest Jennifer Yahne (@jenyahne) actually blamed herself and the powers of her curses for the breakdown.

I cursed the scariest ride at Disney World and broke it.

Kelly Holmes (@kellyhunnybunny) shared photos of the evacuation taking place as well as a photo of Cast Members actually in the water helping manually move the boats along. When boat rides such as Pirates of the Caribbean and “it’s a small world” break down, Cast Members sometimes need to suit up, get in the water, and manually move the boats in order to assist during the evacuation.

Twitter user Andrew Opak (@AndrewOpak) was one of those Guests who was unfortunately stuck for over an hour — but he did find joy in the fact that one member of his party had to listen to the attraction’s song the entire time.

So…..stuck on It’s A Small World and we are being escorted off boat by boat. The best was Michele had to hear its a small world 500 times! Ah, classic! @ Magic Kingdom

So…..stuck on It’s A Small World and we are being escorted off boat by boat. The best was Michele had to hear its a small world 500 times! Ah, classic! @ Magic Kingdom https://t.co/7Tec6mclHk

While no one wants to see Cast Members coming through the water to evacuate them off of a ride they waited to get on, it sometimes happens. Cast Members do everything they can to make the evacuation as safe, easy, and efficient as possible, but in some cases, like the one with “it’s a small world”, it can take a while to get everyone safely off the ride and back on land.

In the past, Cast Members have also had to get wet while assisting Guests off Pirates of the Caribbean. While Disney tries

The Arizona economy continues its recovery from the pandemic, but progress has been uneven. The travel and tourism sector is improving, but still has a long way to go. Transportation and warehousing continues to add jobs at a rapid pace, thanks to accelerated online shopping and demand for delivery services. Fiscal stimulus has driven strong income growth, which boosted consumer spending, but that will end later this year. House prices continue to surge, driving down affordability. Arizona’s population rose at a faster pace than most states during the past decade, but growth was slow relative to the past.

READ ALSO: What will it take to build an antifragile economy in Phoenix?

The outlook for the state remains positive, but the pandemic will still influence the pace of recovery. The baseline forecast assumes that vaccine distribution continues to go well and that no vaccine-resistant variants emerge. The baseline projections call for state jobs to regain their pre-pandemic peak in the first quarter of 2022 and to increase by 643,000 over the next decade. The pessimistic scenario calls for that to happen in the third quarter of 2022 and for the state to add 577,000 jobs by 2030. The optimistic scenario calls for Arizona jobs to regain their pre-pandemic high in the fourth quarter of 2021 and to rise by 778,000 during the next decade.

Arizona added 759,485 residents from 2010 to 2020 according to the latest decennial count from the U.S. Census Bureau. That translated into growth of 11.9% during the decade, which outpaced the U.S. at 7.4% and ranked the state 10th in the nation (including DC). Utah ranked first with 18.4% growth, while West Virginia ranked last with a decline of 3.2%.

While Arizona’s population growth was faster than most states and the nation, it was very slow compared to our own past history. Population growth of 11.9% was the slowest pace recorded since (at least) 1900. It was the second slowest pace for the nation. Note that it is possible that the slow growth may be due in part to a Census undercount driven by the disruptions caused by the pandemic. Stay tuned for more analysis on that.

Leisure and hospitality jobs remain hardest hit (Exhibit 1), with employment down 45,900 from February 2020, followed by government (down 24,100), professional and business services (down 17,000), and education and health services (down 8,300). Only trade, transportation, and utilities jobs were up from February of last year (by 16,400), with all of that growth concentrated in transportation and warehousing. 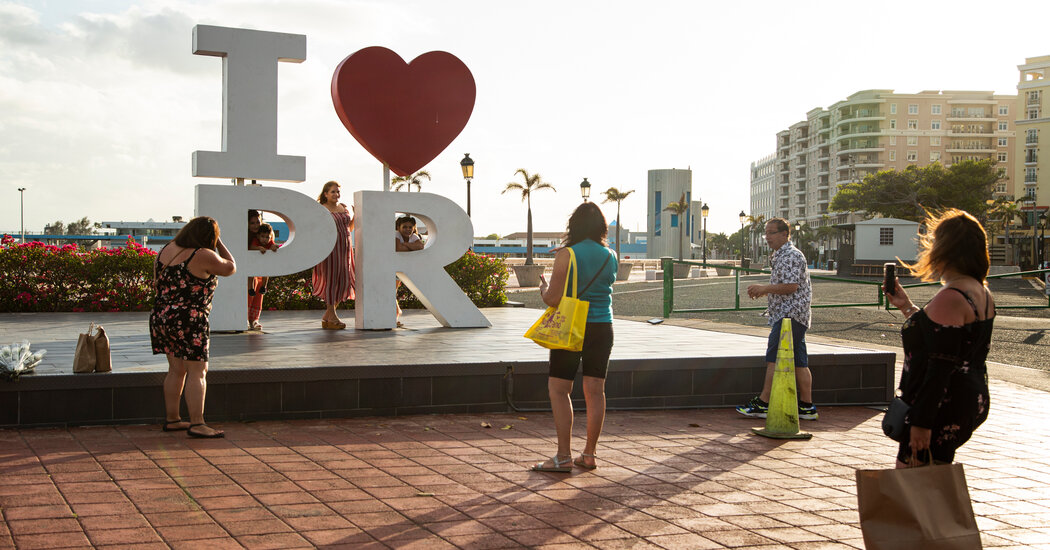 Cruise ships that have been docked for more than a year could restart sailing in United States waters by mid-July, the Centers for Disease Control and Prevention said in a letter sent to the cruise industry late on Wednesday.

After several meetings with cruise lines, the C.D.C. clarified several requirements in its Framework for Conditional Sailing Order, which outlined the steps that cruise companies had to follow to resume operations in U.S. waters. The agency said it will let the companies skip test voyages if they attest that 98 percent of the crew and 95 percent of passengers are fully vaccinated.

Previously, the agency required cruise lines to give 30 days notice before starting a test cruise and to apply for a conditional sailing certificate 60 days before a planned regular voyage. The Cruise Lines International Association, the industry’s trade group, called the guidelines “burdensome” and “ambiguous” and asked the C.D.C. to factor in how quickly Americans are being vaccinated.

The C.D.C. said on Wednesday that it would review and respond to applications for simulated voyages within five days, “putting cruise ships closer to open water sailing sooner.”

The agency also eased its pre-sailing testing requirements for fully vaccinated passengers and crew, allowing them to take a simple viral test instead of a PCR test, which takes longer to yield results.

“We acknowledge that cruising will never be a zero-risk activity and that the goal of the Conditional Sailing Order’s phased approach is to resume passenger operations in a way that mitigates the risk of Covid-19 transmission onboard cruise ships and across port communities,” the C.D.C. said in a statement on Thursday.

“We remain committed to the resumption of passenger operations in the United States following the requirements in the CSO by midsummer, which aligns with the goals announced by many major cruise lines,” it went on.

Cruise companies did not immediately comment on the C.D.C.’s updated guidelines as many were still reviewing the letter.

Florida is the biggest state for cruise operations and it had sued the C.D.C. to force it to restart sailings. But the state has passed legislation mandating that companies that do business with the state or get state subsidies cannot require people to be vaccinated for admission or service. That could make it difficult for cruise lines to guarantee that they have met the vaccination rates set in the C.D.C.’s new letter.