Two months after accepting an offer of appointment, Jewel Maigue has started a new chapter in her life at the U.S. Naval Academy in Annapolis, Maryland.

“I’m feeling both anxious and excited,” she said the day before her official entrance into the academy. “I know it’s natural to be nervous about going into something new, especially when you know you’re going to be completing something that will test you physically, mentally, and morally … but I also know that I’m not alone in feeling this way,” she said.

Excitement was what Lt. Cmdr. Matthew Evans also felt when he received his offer of appointment from the academy. He remembers that he was with his family when they checked their mailbox. In the box was a big manila envelope. “I was speechless,” he said when he saw that it was indeed an offer of appointment.

‘It’s not in me to quit anything’

Evans graduated from the academy in 2010. He spent the last three years of high school on Guam and graduated from Guam High School in 2006. He currently serves as the operations officer at Commander Submarine Squadron Fifteen in Guam.

He says when he first told his parents about his decision to work towards getting into the USNA, his mother was shocked because she knew how challenging it would be to get accepted, a fact that he didn’t know at the time.

This fact, however, didn’t deter him. “It’s not in me to quit anything and I knew I wouldn’t accept a rejection letter if I knew I honestly had not given it my all,” he said. “I knew that getting in was competitive, which was the main driving factor for me. I knew that there were 20,000 other kids just like me fighting for less than 2,000 spots.”

Maigue, who left island for the academy in June, says that she also didn’t let herself get caught up in anxiety, thinking of whether or not she would get in. She told herself instead that she would always end up on the path that she was meant to travel on.

For those who aspire to attend the Naval Academy, the level of competition and high standards when it comes to getting considered for admission is a reality that shouldn’t be taken lightly. Preparation for applying to the academy begins as early as freshman year of high school.

Evans said in high school, he maintained high grades, excelled in sports, even trying out for sports he didn’t even like, joined clubs, and volunteered for community service. “(I) worked to make money and start developing my credit,” he added.

More:‘Everywhere I go, I bring the island with me’

A strong support system is also what kept Evans motivated throughout the preparation and application process. He credits his mother for helping him with the application process and his wife, Krystle Lynn DeVera Evans, who he married in 2012 in the same 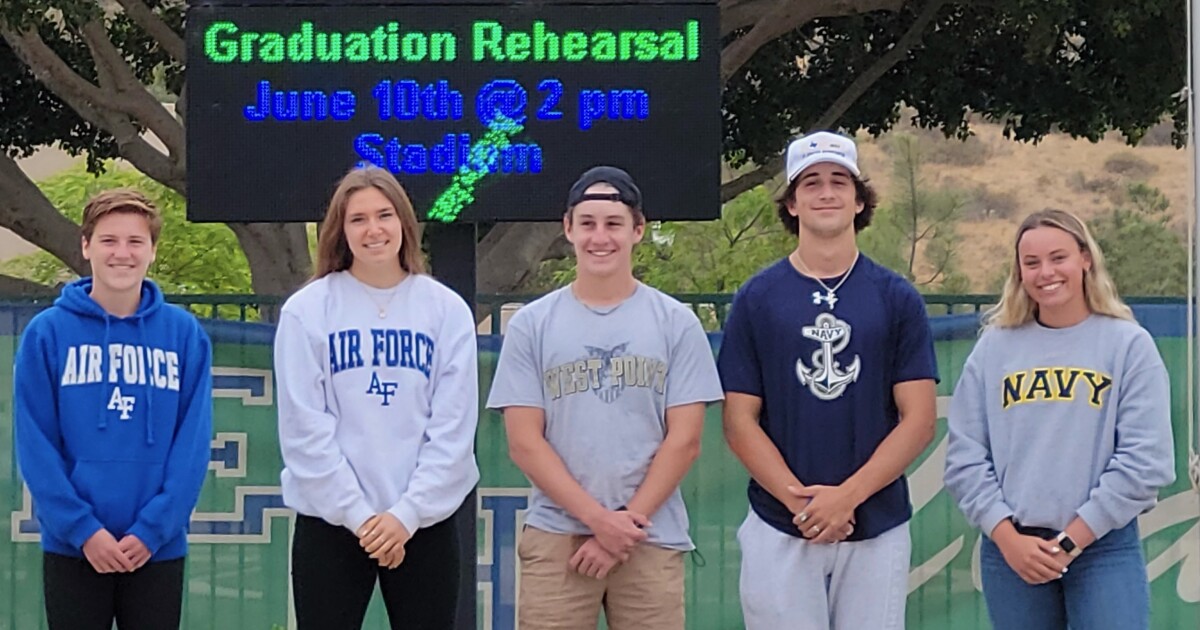 La Costa Canyon High School has five graduating seniors that will be reporting to military service academies this summer as members of the class of 2025.

Mavericks Camryn Delaney and Joe Hurt will be attending the U.S. Naval Academy in Annapolis, Md., Connor King is headed to the U.S. Military Academy (West Point) in New York, and Sydney Mazzilli and Sydney Weaber will be going to the Air Force Academy in Colorado Springs, Colo.

Meet this accomplished group from the LCC class of 2021:

Why did you choose the academy? I have wanted to fly in the Air Force since fifth grade after seeing a military airshow. Through the years and learning more about the Academy, I feel this is the perfect place to achieve that goal and be surrounded by like-minded students that want to be a part of something greater than themselves.
Do you come from a military background? Both of my parents had careers in the Navy. My dad was a Navy doctor and my mom was a Navy helicopter pilot. While I have been inspired by their sacrifice, I wanted to do something different and go on my own path.
What sport did you play in high school? I am a four-year varsity basketball player and recruited athlete for the Air Force Academy.
What do you want to study? I am considering studying economics, meteorology, or biology.
What do you want to do in the service? I would like to be a pilot.
What day do you report? I report June 24, 2021 for Basic Cadet Training.

Why did you choose the academy? I chose the academy because I wanted to get a world-class education and compete in the highest level of athletics while preparing to serve in the Air Force. Upon visiting the academy in February of 2020, I knew that the academy was a very special place to develop young leaders into outstanding officers in our Air Force.
Do you come from a military background? I do not have any close relatives who are/were in the military.
What sport did you play in high school? I have been running varsity cross country and track in high school. I am the 2019 D2 Cross country champion and our team has gone to the state cross country meet three times(not this year because of COVID), we placed third in the state in 2017. I am committed to run cross country and track at the academy.
What do you want to study? I would like to study behavioral science, but I look forward to exploring all the academic opportunities that the academy has to offer.
What do you want to do in the service? I would love to go into investigations or intelligence, but I am looking forward to exploring all the different ways I can serve my country in the Air Force.
What day do you report? Six weeks of basic training starts on

It was a foreign feeling for Cambridge Academy head coach Robert Rooney.

In a normal game, Rooney is tense as he has watched games come right down to the wire. In the 2021 season, the Cougars played in overtime five times and have had games decided with penalty kicks four times.

With 10 minutes left in Wednesday’s match, he could finally relax as the Cougars cruised to a 6-1 victory over Lowcountry Prep, punching their ticket to the SCISA Class 1A state championship.

“I just didn’t know how to behave with that much time left,” Rooney joked. “It’s the first game all year where I didn’t feel like I was about to have a heart attack. I’m just glad they won one like that.”

Rooney’s nerves were quickly calmed as the Cougars struck first just four minutes into the semifinal match, as a Lilly Rudd header found the back of the net off a Lindsey Lee corner kick.

“We started off [well] with the corner kick and that’s why we send Lilly Rudd down there,” Rooney said. “She’s really aggressive on the ball and just attacks it. I thought we were just aggressive all over the field tonight and I thought we could have put a couple more in.”

The second half became the Jordan Mapes show as the striker tallied four goals in the win, all of which were scored in the half.

Mapes and Alex Cockrell used their speed and quick passing to put balls in behind the Lowcountry Prep defenders resulting in multiple chances each for the duo.

“Alex Cockrell, I call her ‘Bam Bam,’ she was phenomenal tonight with her energy,” Rooney said. “She just hustled up and down the [sideline] and created a lot for Jordan Mapes. To score four goals in her last game on this field and to do it in a playoff game is pretty cool.”

The Cougars will travel to Columbia for the state championship game as they await the winner of Charleston Collegiate and Holy Trinity Classical.

“For the seniors, this will be the third time they will play in the state championship,” Rooney said. “That’s what we were talking about right after the game, just how special this really is.”