It was the Joseph Hampton show once again for Evans football on Friday.

Only this time, he wasn’t just a threat on offense. The senior running back terrorized Richmond Academy on special teams, too.

He scored the first Evans touchdown, jumpstarting 20-straight points for the Knights as they came from behind to secure a 20-18 victory.

Hampton’s 60-yard kickoff return was much needed with the Knights offense stalled and trailing by 12 after ARC scored on back-to-back drives. The Musketeers touchdowns came via a 28-yard run by Jontavious Curry and 25-yard touchdown pass to Kellen McDuffie.

Later, Kaleb Jackson connected with KD Dorsey on a 40-yard touchdown pass for Evans and Hampton added a second touchdown – his first on offense – on a third-and-long draw play up the middle.

Richmond Academy (1-2) was stagnant for much of the second half. The Musketeers were able to move the ball on multiple drives, but they didn’t reach the end zone until late in the fourth quarter as Evans secured its fourth straight win to open the season.

Joseph Hampton didn’t offer a typical performance we’ve seen from the feature back, who entered the game with 400 rushing yards and four touchdowns. But it was once again an impactful performance.

With two of the Knights’ three touchdowns, he once again splattered his name in the box score and proved why teams always need to know where he is on the field – even on special teams.

It was a showdown of the No. 6s. Richmond Academy’s No. 6 – Jontavious Curry – scored two touchdowns in Friday’s game. Evans’ No. 6 – Hampton – also had two touchdowns to his name on Friday night.

Evans’ Kaleb Jackson throws his name in the mix as well with two passing touchdowns himself. He connected with Dorsey and Jourdain Spann to show off the air attack.

Hampton’s 60-yard kickoff return, following a Richmond Academy touchdown sparked the Knights to the tune of 20-straight points after it started out sluggish.

For Evans, it further proves why it’s important to find ways to get Hampton the ball. When the offense struggled to get going and he didn’t find any open holes early, it looked like the Knights were going to have problems. After Hampton’s first touchdown, the Knights returned to form.

Richmond Academy drops its second straight game of the season, both coming by one possession. Against Augusta Christian, it was missed PATs and field goals that proved to be the difference. On Friday night, it was simply not finishing the job. With a tough region schedule on the horizon, the Musketeers must figure out how to not only stay hot after a strong start, but score when they’re deep in opponent’s territory.

When Glenn Hills’ football game against Therrell was canceled just hours before kickoff last Friday after the Spartans had a positive COVID case within the program, Richmond Academy coach Lyle Burns didn’t waste any time looking for a replacement opponent.

“We started looking right then,” Burns said of urgently looking for a replacement game. “There wasn’t very many until that time. And even yesterday, until the evening time, there wasn’t many people available. Everybody is looking for something fairly close, or something that they’re going to get a good gauge so it’s a little harder than it seems to find a game that works for you.”

More:He’s a college football recruit. But talent isn’t the only thing this transfer brought to Josey

By Monday afternoon, Augusta Christian was looking for a new opponent too, after Fox Creek had to cancel this Friday due to COVID issues within the program.

Now, Augusta Christian will travel to Richmond County Friday, giving both teams what each needed: a new opponent and a good test.

“We really had to play this week and got really fortunate that somebody close to us was in the same situation,” Burns said. “They’re very good. We’re going to have to play very well and be fortunate to win. That’s just what it is. We’re just happy we’re getting to play a game.”

Richmond Academy (1-0) is still looking for its first official game after Hancock Central canceled last minute last week due to issues created by lack of equipment. Augusta Christian (1-0) opened its season on Aug. 19 with a win against Johnson (Savannah) to officially kickoff football season in the Augusta-area.

With Augusta Christian renting Lions Memorial Field in North Augusta while its new field surface being installed, a local away game worked out.

Burns says his team can be excited about getting its season officially started.

“I hope they’re excited,” Burns said of his team. “There hasn’t been a whole lot of excitement here lately so I’m kind of hoping it will kind of rejuvenate those guys. Lord knows we need something.” 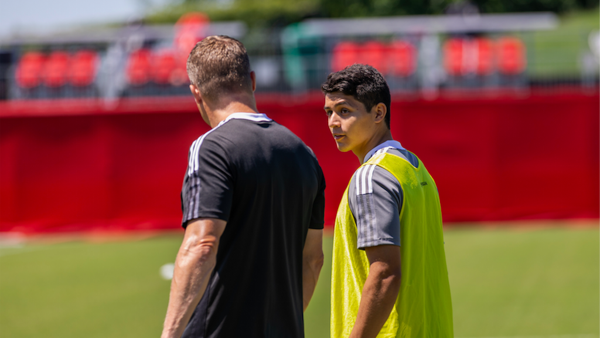 RICHMOND, Va. – The Richmond Kickers announced on Wednesday the signing of Richmond United midfielder Damian Gallegos to a USL Academy contract, pending league and federation approval. Gallegos will be available for selection Saturday when the Kickers host Fort Lauderdale CF at City Stadium.

“Damian has worked very hard as a youth player to put himself in a position to play college soccer at VCU,” Richmond Kickers’ Chief Sporting Officer and Head Coach Darren Sawatzky said. “He had a great ECNL playoffs scoring five goals and capping off a good academy season. It is important that we respect that work and reward the level of training he has brought to Kickers pro training each day.

“This is a deserved opportunity and we are looking to help him launch from the Richmond United opportunity to his opportunity at VCU. We want to bring in players aspiring to get to the next level, and if you are good enough, you are old enough.”

The 18-year-old Gallegos, a native of Mechanicsville, Va., has played for Richmond United for the last six years. Previously, he was a Richmond Kickers Youth player as a member of the U12 Elite team, and as a member of the travel teams starting at U9.

“Originally, Coach [Michael] Callahan from Richmond United initiated the talk between Coach Sawatzky and me,” Gallegos said. “We started a scouting process where Coach Darren came to watch our games and training sessions, and it progressed to him reaching out and starting the conversation of when I could get out to the Kickers’ practice.

“I was really excited and a little bit nervous at first coming out here. But after that I really got to experience the professional environment, and I’m just really excited to continue and progress through Coach Darren and learn from him.”

Gallegos began training with the first team earlier this summer and he slotted into the team’s culture quickly exhibiting his industrious play, intelligence, and humility.

“The Richmond Kickers pro team is about the community and we want to represent that community well,” Sawatzky said. “Damian is from the local youth soccer community and he embodies character in his approach. I think the speed of play and speed of thought in the pro training will help him as he grows, but he is a natural in our culture because he is humble, works hard, and he appreciates the opportunity to play with us before he heads off to college.”

“I’m really proud and excited to have this experience playing for the first team of my hometown club,” said Gallegos. “I know there are a couple players who have done this before, and I’m just really glad to be the next one to be introduced through an Academy contract.”

Gallegos will continue to play and train with the Kickers through the summer before he joins Head Coach Dave Giffard’s side at VCU at the start of the 2021 Fall semester.