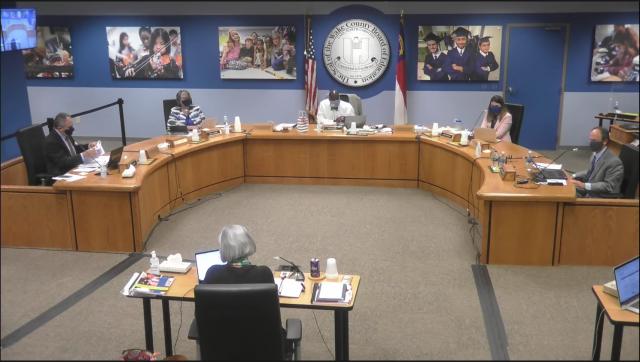 Cary, N.C. — Parents and guardians in the Wake County Public School System have from Thursday until May 2 to decide whether to enroll in the district’s virtual academy next year.

The district’s Board of Education approved the registration period Tuesday evening, without opposition.

It will be the second year of the school district’s virtual academy, created to work around the COVID-19 pandemic, but it will look different from this year.

Parents and guardians can register for the virtual academy, but registration isn’t automatically confirmed by the school. Further an admitted student may be removed from virtual academy if the student isn’t following the responsibilities of enrollment, such as attendance and assignment completion. Families will receive confirmation of registration by May 12.

Registration is for the full academic year, but the district will reconsider requiring the full year in virtual instruction after the first semester, if vaccines become widely available for children younger than 16.

Board Member Christina Kushner said she appreciated those concerns.

“We should still try to work really hard to allay those concerns to try to get our pre-k kiddos in person,” Kushner said.

“We are ready, expectant and want our families to access in-person learning for the next school year,” she said.

District officials have laid out their goals for the academy next year but not finessed details, such as which electives will be offered at each school and whether 100% of classes will be taught by an online-only educator. Many details will be firmed up based on registration — who enrolls at which schools and what their needs are.

The district’s goal is to eliminate concurrent teaching — when a teacher instructs both an online and in-person class at the same time. But Assistant Superintendent of Academics Drew Cook said a full elimination of concurrent teaching isn’t guaranteed.

The district has plans in place to avoid concurrent, by having teachers focused only on online learning or by offering an elective taught by one person to multiple schools’ virtual students, among other things, he said.

“We’ve got kind of a menu of strategies to deploy,” Cook said.

Cook acknowledged the limitations of the virtual academy, based on “first-hand experience from the past year.”

“It is not a solid, sustainable practice” on a large-scale long-term, he said.

The virtual academy will be run through each school, rather than being a centralized, district-wide academy.

“It is not the virtual academy that