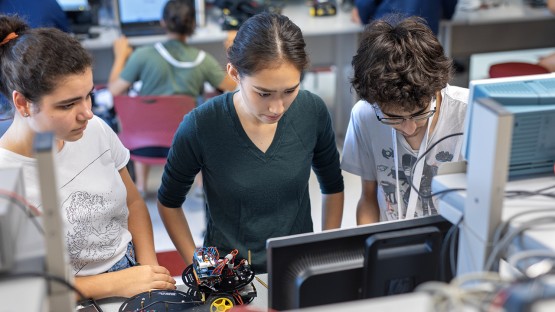 The College of Engineering will grow the number of students it invites to its CATALYST Academy – a one-week summer program aimed at inspiring minority students to study engineering – thanks to a $2 million gift from Peter Wright ’75, MBA ’76.

The CATALYST Academy is for high school juniors and seniors who excel in math and science but may not have considered a STEM-related career path. Through the establishment of the Peter A. Wright CATALYST Fund, the academy will gradually grow its participants by approximately 25% while making it more accessible to low-income students. The program’s last cohort included 46 students.

“CATALYST Academy is a success story in the College of Engineering,” said Lynden Archer, the Joseph Silbert Dean of Engineering. “Peter’s generous support will allow us to reach a more economically diverse population of underserved students and will serve not just Cornell, but a nation in need of well-educated, able scientists and engineers from all racial, ethnic and socioeconomic backgrounds.”

Each year, the academy – which is focused on students from backgrounds underrepresented in engineering, including minorities and first-generation students – is led by a different faculty member who exposes participants to different fields of engineering through hands-on laboratory projects and workshops.

Among other priorities, the Wright CATALYST Fund will cover travel stipends, support full tuition assistance, and develop mentoring structures that ensure students are able to apply and pursue college degrees in science, technology, engineering and math.

The expanded academy will increase Cornell’s access to talented high school students while expanding the pipeline of people entering STEM careers. A 2019 report from the National Academy of Engineering highlights the need for increasing the number of skilled STEM professionals in the U.S. workforce as a way of spurring economic growth and producing the technologies needed to solve the world’s biggest challenges. The report notes that although the U.S. STEM workforce has grown more diverse over time, its numbers are still far below the level of diversity represented in the general population.

“I believe that many of today’s societal issues such as health care, sustainability and global warming will be solved by STEM college graduates,” said Wright, a general partner at investment managing firm P.A.W. Capital Partners.

Wright received chemical engineering and MBA degrees from Cornell, and through the years has been a financial supporter of various professorships, research initiatives and student scholarships at the university.

“It is important to open up these opportunities to qualified students that are economically disadvantaged,” he said. “I am so happy to help Cornell expand its CATALYST Academy to a greater number of worthy students.”

The CATALYST Academy has demonstrated strong success in inspiring students to pursue a quality STEM education. Since its inception 2014, 87% of the program’s participants have chosen to major in a STEM field, with 64% of participants applying to Cornell.

“We’re very thankful that Peter shares our vision for growing this program,” said Jami P. Joyner, director of Diversity Programs in Engineering, which founded and operates the CATALYST