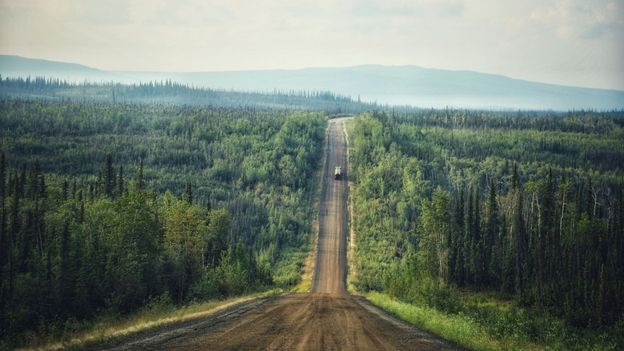 Outside the window the frigid tundra stretched away to meet the horizon; vast, treeless and unnerving. I was the sole passenger on North America’s most northerly bus service, the Dalton Highway Express, as it bumped its way along Alaska’s notorious haul road towards the ominously named settlement of Deadhorse near the Arctic Ocean. The only other traveller, a laconic Canadian, had disembarked several hours previously at a desolate truck stop called Coldfoot. Since then, the driver and I had been motoring north past the road’s last campground, its last outhouse and its last tree (a forlorn looking spruce with a “do not cut” sign). It was as if I was experiencing an extreme form of social distancing before Covid-19 made it de rigueur.

Extending 414 miles from Livengood just north of Fairbanks to the rugged Prudhoe Bay oilfield in Deadhorse, the Dalton Highway is America’s most northerly interconnecting road. It’s also, arguably, its most dangerous. Huge 18-wheel trucks hog the centre of the unpaved thoroughfare; arctic storms can reduce visibility to practically zero; and the weather can be deathly cold. In 1971, Cat Prospect Camp just south of Coldfoot recorded the US’ lowest-ever temperature, a bone-chilling -80F (-62C).

The Dalton Highway was built in 1974 to serve the Prudhoe Bay oil patch, Alaska’s economic lifeblood and supplier of nearly 85% of the state’s budget. In its early days, it was purely a haul road for trucks. Then, in 1994, the state opened the highway to private vehicles. With 100,000lb juggernauts thundering full throttle over loose gravel, don’t expect an easy ride.

“Driving the Dalton Highway can be extreme in summer or winter,” said John Rapphahn, park ranger and manager of the Arctic Interagency Visitor Center in Coldfoot. “In summer, trucks throw up dust and muddy roads can make surfaces slippery. Winter brings icy conditions and avalanches. With only about one quarter of the road paved, motorists should be prepared for a flat tyre or two.”

You may also be interested in:
• The US island that feels like Russia
• Seven of the world’s riskiest roads
• The town where money grows on trees

Breakdowns can be costly. “I once found a couple stuck in a ditch in the wintertime at -30F,” recounted Rapphahn. “I couldn’t get their vehicle out, so I gave them a ride to Yukon River Camp where they called for a tow truck. It cost them around $1,200.”

If you’re driving, he recommends equipping yourself with a radio. “It’s worth investing in a handheld CB tuned to Channel 19. In this way, approaching truckers and pilot cars can notify you of an oversize load when they see you on the road. You will also have the added benefit of being able to communicate with other vehicles if a problem occurs.”

Lacking a car or radio, I needed help to reach Deadhorse via terra firma and fulfil my ambition of crossing the Arctic Circle by land. Hitching a lift with a truck wasn’t an option as commercial