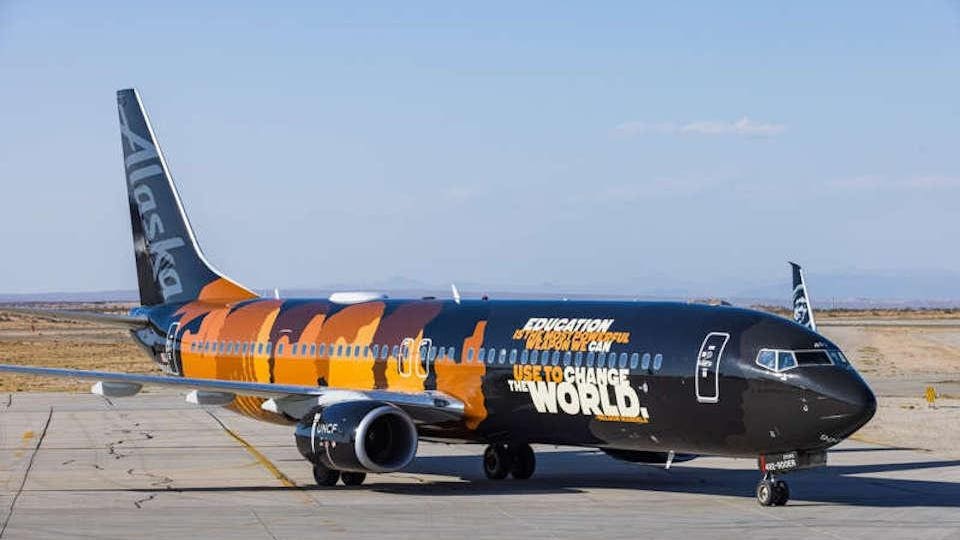 An airline’s livery is the core of its brand identity, with colors and icons that define a carrier’s image for years, or even decades – such as Qantas’s kangaroo, Lufthansa’s crane, or the oryx that graces the tails of Qatar Airways’ jets. Airlines sometimes commission one-off airplane liveries to promote a specific event, anniversary, partnership, or the launch of a new type of aircraft. Today, Alaska Airlines plotted a route toward more inclusivity with the reveal of a specially painted plane that highlights diversity, equity, and education.

Designed in partnership with UNCF, which provides funding for scholarships for Black students to attend Historically Black Colleges and Universities (HBCUs), the eye-catching Boeing 737 is, “a symbol of our commitment to education and advancing racial equity at Alaska Airlines, and we hope it inspires others as well,” according to an announcement from the airline.

“As a company, we know we are not yet where we need to be when it comes to diversity, but we are inspired and guided by our value to do the right thing,” said Alaska Airlines CEO Ben Minicucci. “With this aircraft, we are doing the right thing by amplifying the conversation around education, equity and belonging and taking it to the skies.”

The plane bears the name, “Our Commitment,” and takes the airline’s newly delineated racial equity commitments as its watchwords, including representation of racial diversity, creating an inclusive company culture, and providing public leadership by working with community-based organizations to foster education and career opportunities for young people.

The jet has three inspirational quotes emblazoned across its fuselage. The first declares, “The time is always right to do what is right,” and was penned by the Reverend Dr. Martin Luther King, Jr. Attributed to South Africa’s Nelson Mandela, the second quote states, “Education is the most powerful weapon which you can use to change to the world.” Signaling a call to action, the third quote by Dr. Maya Angelou urges, “When you learn, teach, when you get, give.”

Alaska Airlines asked for input from UNCF, as well as members of its own Alaska Air Group Black Employees, Allies & Advocates resource group in the design. The aircraft’s base coat is a jet black – a stark departure from Alaska’s usual white and blue hues. The typography and palette were specially created by Chicago-based artist Adé Hogue, who took inspiration from the Civil Rights Movement era. “At the beginning, my mind went to protest posters from the ’60s and the shape of the design slowly shifted to what you see today,” explained Hogue.

As for the series of faces that adorn each side of the plane, they are artistic renderings of 14 students connected to Alaska Airlines employees, providing a personal touch. According to Jonny Mack, who has designed 10 of the airline’s other specially liveried aircraft in the past, “We