More than 2 million people passed through TSA checkpoints on Thursday, nearly tripling the number of travelers compared to 2020 and topping 2019 figures for the first time since the pandemic began.

AAA estimates that 47.7 million Americans will travel for the July Fourth weekend. 3.7 million of those people are expected to take to the skies increasing the number of travelers by 164% compared to last year.

“Travel is in full swing this summer, as Americans eagerly pursue travel opportunities they’ve deferred for the last year-and-a-half,” AAA said in a press release. “We saw strong demand for travel around Memorial Day and the kick-off of summer, and all indications now point to a busy Independence Day to follow.”

There were 37 million people estimated to travel during Memorial Day weekend, 2.7 million of those travelers choosing to fly instead of drive, AAA reports.

Travelers going by air this weekend may want to brush up on the many ways they can enhance the flying experience with early check-ins, apps for easy airport navigation, and more.

AAA estimates that 43.6 million Americans are expected to travel by car this holiday weekend. But gas prices are expected to be the most expensive since 2014, “with the national average likely to remain above $3 per gallon,” AAA says.

“Higher gas prices won’t deter road trippers this summer. In fact, we’re expecting record-breaking levels of car travel this July Fourth,” AAA said. “Though prices will remain above $3 a gallon, travelers are likely to look for more free activities or eat out less, but still take their vacations as planned.” 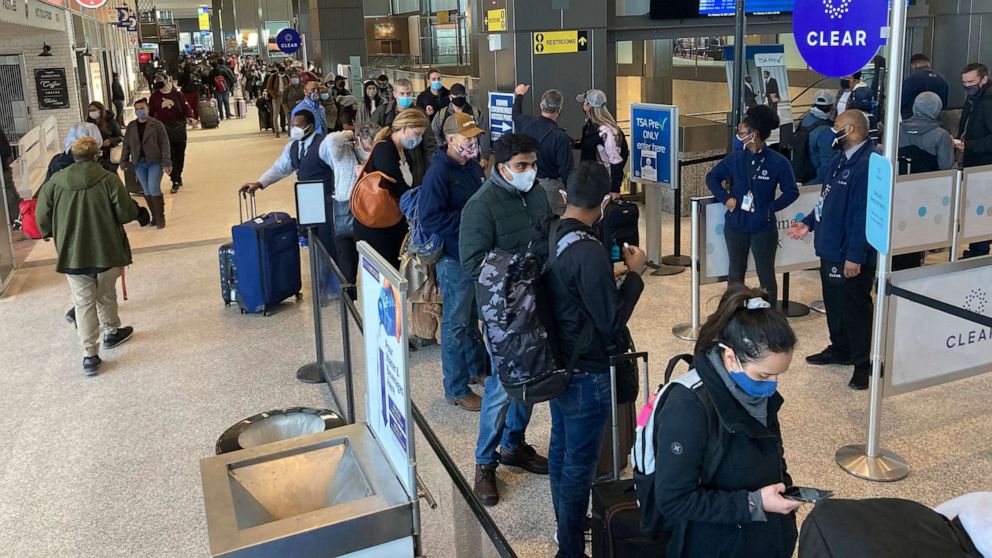 Car travel is expected to be higher than it was in 2019, AAA said.

The July 4th weekend is expected to be the busiest travel period since the start of the pandemic, with more Americans taking to the roads and skies.

AAA forecasts 43 million Americans will hit the roads over the holiday — 5% more than the volume the organization saw in 2019.

“What’s interesting is compared to 2019 travel, volume by car is actually up,” Jeanette McGee, director of AAA’s external communications told ABC News. “It just proves that the road trip is back stronger than ever.”

“If you’re headed out for the holiday weekend, you’re going to want to avoid traveling between 3 and 6 p.m. on Thursday and Friday,” McGee said. “You’re going to have commuters mixing with people getting out of town. So, the best day to travel is going to be Sunday, and if you’re returning on Monday, definitely do so earlier in the day.”

Before hitting the road, be prepared for high prices at the gas pump — according to AAA, prices will be the highest since the same period in 2014.

“Gas prices are expensive, and they are not letting up,” McGee said. “The national average is $3.09 and we expect it to increase ahead of the holiday weekend.”

“Rental cars are definitely expensive this summer, and it’s really important that if you’re planning a trip that you reserve early,” McGee said.

According to Hopper, an online travel booking tool, rental car prices are up 100% relative to where they were at the beginning of the year.

“They were about $50 in January and they’re about $110 each day, currently,” Hopper economist Adit Damodarn told ABC News. “We thought that those prices would start to slow down, but the catalyst for kind of bringing those prices back down would be increasing the supply of rental cars.”

While air travel is not expected to exceed 2019 numbers, experts said airlines will carry the most passengers since the start of the pandemic.

“July 4 is the most searched weekend of summer 2021 thus far,” Damodarn said. “It’s going to be the busiest travel weekend since the start of the pandemic.”

“We are currently about five housekeepers short for what we anticipate to be probably the busiest summer we’ve ever had,” Klemme said.

To try to attract workers, the job’s starting wage is now $15 an hour, an increase of $3.50 per hour. Klemme said in the worst-case scenario, other Fitger’s management and staff would have to step in to help clean rooms, or they would have to change the check-in and check-out times to allow for more time in between guests. However, as of right now, he doesn’t anticipate they will have to resort to that.

“We would like to get to every position in the hotel and mall with the same ownership up to a minimum wage of $15 in the next year — that’s the goal — but housekeeping being the biggest need, that one came first.”

Klemme isn’t alone. Nearly everyone in the hospitality sector in the area is hiring for the busy season ahead. Check out any employment website and you’ll find countless positions “urgently hiring.” Elena Foshay, Duluth’s director of workforce development, said she gets calls every day from restaurants and hotels looking for help with recruiting.

Lee’s Pizza in Duluth had to change its hours and delivery radius because it only has one cook and one delivery driver. And Shorty’s Pizza & Smoked Meat in Superior announced last week it closed the restaurant for good, citing lack of employees.

Foshay said the manufacturing industry is short-staffed in many entry-level jobs, and health care workers such as certified nursing assistants are in high demand.

One of the major reasons the workforce is not filling the demand of hospitality jobs this summer is the additional $300 per week of unemployment benefits that were extended by the American Rescue Plan. Many minimum wage jobs cannot offer the same amount of income that people on unemployment currently receive. The federal supplemental benefits will end on Sept. 6.

“Everyone likes to blame the extra $300 in unemployment, but that’s not entirely it,” Foshay said. “It certainly is making it easier for folks who are deciding not to look for work, but that’s not the only reason that’s holding people back.”

The hospitality industry was the hardest-hit sector during the pandemic, so many restaurants and hotels are having to start from scratch to rebuild the workforce they were forced to lay off last year.

In Cook County, many local businesses rely on international student workers to come for the summer. Chamber of Commerce Executive Director Jim Boyd said many countries that usually have students come on visas still have travel restrictions in place, and embassies and consulates haven’t had the capacity to process visas.

He said restaurants in the county are hit the hardest by the worker shortage, and several