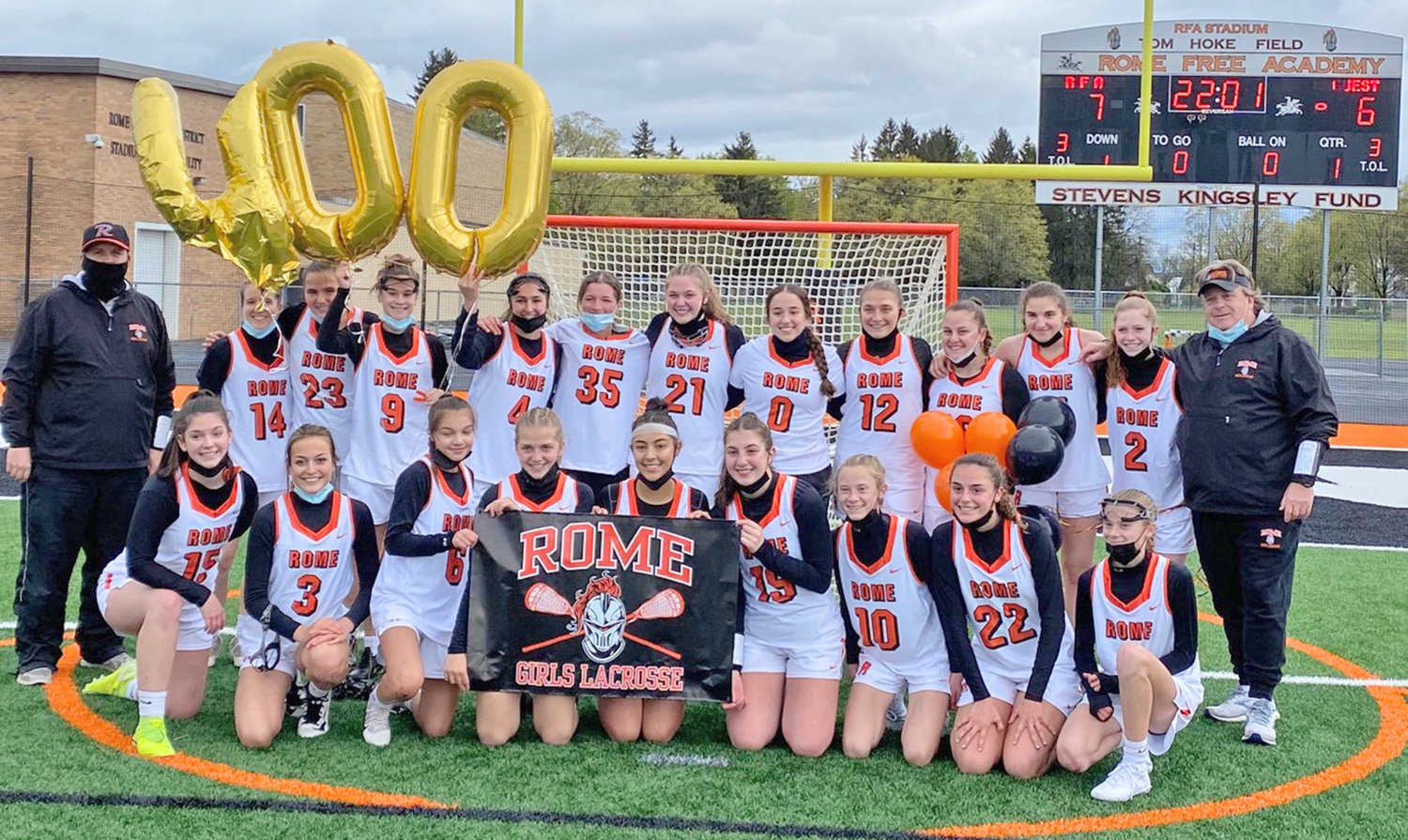 The Rome Free Academy girls lacrosse team improved to 5-0 on the season and head coach Doug Rowe picked up his 400th career win on Saturday when the Black Knights defeated visiting Cazenovia, 7-6.

Alana Iacovissi made four saves for RFA, who’s back on the field on Thursday when they travel to Whitesboro.

The RFA boys lacrosse team trailed Skaneateles 3-2 after a quarter Saturday on the road. But their offense sputtered and they lost 11-4.

Keshawn Clark scored twice for RFA. Jared Hussey scored and had two assists. The other goal was scored by Peter Sciortino.

Treaver Ford made seven saves in net for RFA.

RFA next plays on Wednesday, May 19, when the Black Knights host Holland Patent at 4:30 p.m. at RFA Stadium.

In another boys lacrosse game, New Hartford rolled past Whitesboro, 20-1, on Monday.

In goal, Ryan Quinn made 13 saves for the Warriors and Dash Lamitie made six saves for New Hartford.

Whitesboro plays again on Saturday when they visit Vernon-Verona-Sherrill at 11 a.m.

Logan Vanderhoof scored three goals for the VVS boys lacrosse team, but it fell 16-7 to host Chittenango on Monday.

Keaton Fox and James Wheeler both added a goal for the Red Devils, who play again on Saturday when they host Whitesboro at 11 a.m.

Mia Lopata scored four times for Clinton and had an assist. Alexis Altera had a hat trick.

Katelynn Deveans and Chelsea Lopata each had a goal and an assist. Claire Baron and Ava Alteri added a goal each.

In net for the Warriors, Angelina Borowiec made nine saves and Elise Mozloom made four.

Emily Picolla made eight saves for the Spartans in goal.

Clinton was schedule to travel to Immaculate Heart Central in Watertown Monday.

The Whitesboro girls lacrosse team got a 13-4 road win at Chittenango Saturday.

The Warriors held a 6-4 lead at the half but outscored the Bears 7-0 in the second half to pull away.

Gracie Stuhlman had a hat trick and two assists for the Warriors, who improved to