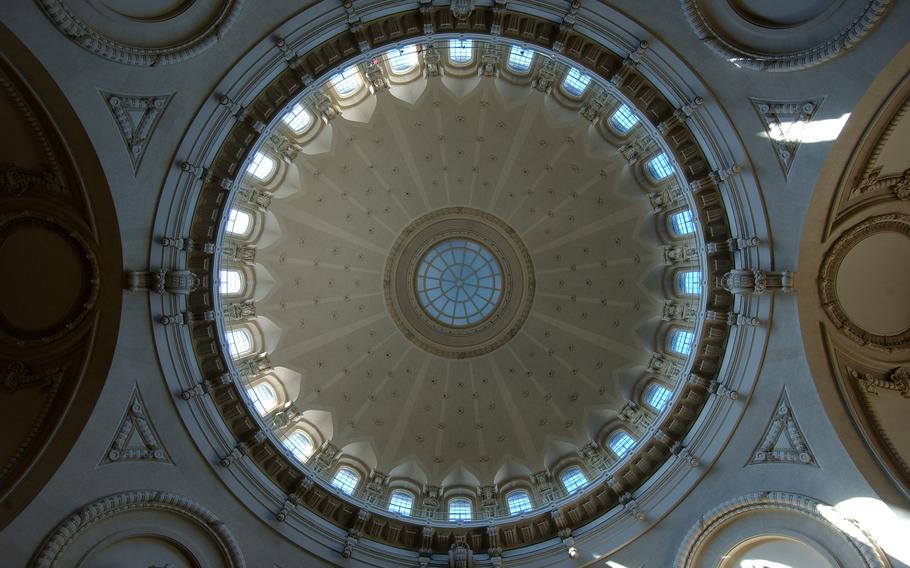 The dome of the U.S. Naval Academy Chapel in Annapolis, Md. Weddings at the Naval Academy chapel were stopped from March 14, 2020, to May 29, 2021, said Brenda Stone, senior events and wedding coordinator. (Chadwick Runge/U.S. Navy)

When her boyfriend suggested they vacation for a couple days in Paris, she started arranging the travel plans.

They were already in London because her son was performing in the New Year’s Day parade with his marching band. So Lelis planned for her boyfriend and her to take the Chunnel to Paris in December 2018.

She arranged tickets to go to the Eiffel Tower. She even spotted a tourist to take their picture when they got to the landmark so they could get what Lelis called the traditional tourist picture.

But retired Cmdr. David Hostetler had a surprise. So when the tourist stopped snapping pictures, he asked for a couple more. Then he got out the ring and asked Lelis to marry him, even asking in French.

Another surprise awaiting Lelis and Hostetler is that their wedding planned for the Naval Academy chapel would not happen on July 5, 2020, as they planned, but rather almost a year later.

Lelis’ and Hostetler’s wedding was one of the many 2020 weddings interrupted by the ongoing COVID-19 pandemic.

First, the wedding was postponed to Sept. 5, 2020, in hopes that pandemic would have ceased by then. But with the country still adding new cases every day, the wedding needed to be postponed again. Hostetler made the call to push it to June 19, 2021, when the virus would hopefully be under better control.

Their wedding was one of the first weddings held at the academy once weddings were allowed again.

Due to the pandemic, weddings at the Naval Academy chapel were stopped from March 14, 2020, to May 29, 2021, said Brenda Stone, senior events and wedding coordinator.

Weddings scheduled for that time had to be rescheduled, Stone said. Unlike many wedding venues, the chapel, as it services mainly Naval Academy graduates, had to schedule around deployments as well, which means some 2020 weddings are scheduled into 2022.

The academy’s wedding services are not seeing their usual numbers, another result of the pandemic. That does not mean the wedding coordinators are not busy. Rescheduling the weddings takes time, especially when couples would have to reschedule two or three times.

The academy books weddings a year out, so for some couples that meant reapplying to have their celebration at the chapel.

And there are couples that are applying for chapel weddings that got engaged in 2020, so the wedding coordinators will be busy. To fit in all of the weddings, there may be days where the chapel sees up to seven weddings in one day, Stone said.

Some couples chose to do smaller ceremonies while waiting for when they could have their larger celebration, Stone said. Others had to cancel and do local weddings.

For couples who chose to do smaller weddings in the area, the academy allowed them to take pictures on the grounds even though the Chapel was closed, Stone said.

Hostetler and Lelis chose the Naval Academy for a couple reasons. They were considering marrying in Florida where they live, New Jersey where Lelis is from or the academy because Hostetler graduated in 1986.

They attended a Naval Academy mass while visiting a friend, and the couple decided they wanted their wedding to be at the chapel. It was a good location, as well, for out-of-town guests as it was drivable for many, which worked out when it came to traveling during the pandemic, Hostetler said.

They opted to wait for their ceremony in June instead of getting married ahead of it, Lelis said.

“We didn’t want to get married just for the sake of being married,” she said. “We wanted to have the celebration. I wanted to have all the festivities. I wanted all of my family to be there.”

With their hearts set on their academy wedding, what was left to do was plan. Hostetler said he took a larger role because he is retired and had more time. Stone and Chloe Maxent, a wedding coordinator, were wonderful to work with, he said.

It felt like it was their mission to see him marry Lelis, he said.

His life in the Navy and time working with the Marine Corps taught him to adapt, and Hostetler said he drew on those lessons while trying to plan the wedding. He could not control the pandemic, so they focused on what they could control.

There was still some uncertainty, but Lelis said she chose to stay positive. Even up until the wedding, it was unclear what regulations would be in place.

The couple were ready to have masks that said “ Go Navy, beat COVID” as wedding favors, Hostetler said, but they ended up not needing them because the mask mandate dropped shortly before the wedding.

There were also restrictions on guests, Stone said, but those dropped closer to May 29. Guidelines had mandated no more than 100 guests, but as restrictions dropped and the Yard reopened, that limit increased to 240.

That did not make a huge difference to the Lelis and Hostetler wedding, as they had 70 guests, despite their initial guest list of 120.

The final guest count worked out well, Hostetler said, as they held their reception at the Naval Academy Club and 70 guests meant there was plenty of room.

Lelis and Hostetler were able to have their Catholic Mass in the chapel before going to the reception. He wore a barong, Filipino formal attire, because Lelis is Filipino and it was a symbol of unity with her family.

The Chapel dome gleamed with the new copper on it, which Hostetler said felt like was done just for the couple, given the timing.

His Naval Academy friends did give him a sword arch, but they did it at the reception instead of outside the chapel.

There was dancing, and food, which was delicious, Hostetler said.

Their family was able to attend, which was important, Lelis said.

“It was wonderful,” she said. “It was everything we wanted.”

Sun Jul 25 , 2021
HARTFORD, Conn. (AP) — Connecticut could lag behind most states in regaining hotel jobs lost during the coronavirus pandemic, according to projections by a national trade group. The Washington, D.C.-based American Hotel and Lodging Association predicts the state will have regained a little less than 72% of its roughly 26,000 […]