THOMASVILLE, GA – After their 3-2 loss at home to Brookwood (BKW) on Tuesday March 25, the Southland Academy Raiders (SAR) had to travel down to Thomasville to face the Warriors again in a doubleheader on Friday, March 26. However, things did not go well for SAR. The Warriors homered twice in Game 1 on their way to a 7-1 victory and the Raiders dropped Game 2 in a pitchers’ dual by the score of 2-1.

In Game 1, the Raiders got off to a good start as James Griffin drove in Henry Johnson on an RBI single in the top of the first inning. However, the Warriors responded with a two-run home run by Jacob Lauderdale off SAR starter Chad Ledger in the bottom half of the inning to take a 2-1 lead. Them in the bottom of the second, the Warriors took control of the game as Jackson Vaughn belted a three-run home run with two outs to give BKW a 5-1 lead.

In the top of the fourth inning, the Raiders had a chance to cut into the BKW lead as Greer Hagerson doubled with two outs, putting a runner in scoring position. However, SAR was not able to take advantage as Will Godwin grounded out to third to end the threat.

The Raiders had another opportunity to score runs and get back in the game in the fifth. With two outs, Chase Ledger and Owen Exley both singled, putting runners at first and third, but Exley was thrown out trying to steal second and the Raiders missed another opportunity to drive in runs. The Warriors were able to take advantage by adding insurance runs in the fifth and sixth innings to salt away their 7-1 victory.

Hagerson and Griffin each went 1 for 2 in Game 1 to lead the SAR offense, while Nathan Duke, Henry Johnson, Chase Ledger and Exley each tallied one hit.

Ledger went the first four innings on the hill for the Raiders. He gave up five runs on five hits, walked one batter and struck out five in four innings of work.

Buddy Brady came on in relief of Ledger. He gave up two runs on four hits, walked one and struck out three in two innings of work.

Camden Harbin led the Warriors’ offense by going 2 for 3 with two singles and both Lauderdale and Vaughn each homered and drove in a combined six RBIs.

Lauderdale pitched almost the entire game for BKW. He gave up one run on six hits, walked one and struck out 10 SAR batters.

The Raiders didn’t have time to mourn the loss in Game 1, as Game 2 was to follow.

In Game 2, both SAR starter Owen Exley and reliever Perry Usher pitched extremely well, but the Warriors were able to come up with two runs in the bottom of the fifth on a two-run home run by Harper McLendon. That home run was the difference in the ballgame; as the Warriors would go on to take Game 2 by the score of 2-1. 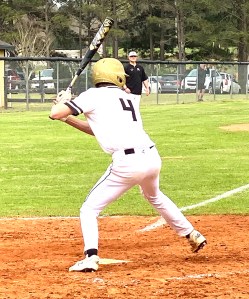 Southland Academy sophomore infielder Henry Johnson singled and scored a run in Game 1. He also doubled and stole third in the top of the seventh in Game 2 against Brookwood.
ATR Archive

In the top of the sixth inning, the Raiders scored their only run of the game on an RBI single by Buddy Brady and had a chance to tie the game with runners at first and second with one out. However, Hagerson struck out and Will Godwin popped up to the shortstop to end the threat.

With one out in the top of the seventh, the Raiders once again were able to get the tying run aboard when Henry Johnson doubled to centerfield. Johnson would later steal third, putting the tying run 90 feet away. However, BKW reliever Parker Mirick struck out Chase Ledger and retired Exley to end the game.

In both games of the doubleheader, the Raiders weren’t able to get the clutch hit with runners in scoring position.

Exley, who started on the hill for SAR, gave up no runs or hits and struck out three batters in just one inning of work. Perry Usher came on in relief of Ledger and gave up two runs on six hits, while walking one and striking out eight BKW batters in five innings of work.

The Raiders fall to 3-5 on the season, while the Warriors improve to 9-3.

SAR will try to rebound from this setback when they travel down to Damascus, GA on Thursday, April 1 to take on Southwest Georgia Academy. First pitch is scheduled for 4:30 p.m.

Sun Mar 28 , 2021
California’s unemployment rate dropped 0.5 percentage points to 8.5% in February, as the state’s employers gained 141,000  jobs, according to data released Friday by the California Employment Development Department. Locally, the unemployment rate in Santa Barbara County was 7.1% in February, down from a revised 7.8% in January. The February […]