Singapore Moves Back Toward Lockdown as Virus Cases Rise

(Bloomberg) — Singapore is returning to the lockdown-like conditions it last imposed a year ago, banning dining-in and limiting gatherings to two people, as a rising number of untraceable virus infections pressures one of the most successful places in the world at Covid containment.For four weeks from May 16 to June 13, gathering sizes as well as household visitors will be cut to a maximum of two people from five people now, working from home will be the default, and food places can only do takeaways and deliveries, the health ministry said in a statement on Friday. The resurgence is also putting a highly-anticipated travel bubble with Hong Kong in doubt.The Singapore dollar extended its decline after the announcement of the new rules. The city’s benchmark stock index bucked Asia’s positive trend to sink as much as 3.2%, the most since June last year, before ending 2.2% lower. Shares linked to travel and consumption were among the biggest losers, with bellwether Singapore Airlines Ltd. sliding as much as 7.3%.“A pattern of local unlinked community cases has emerged and is persisting,” the statement said. “We need to act decisively to contain these risks as any one leak could result in an uncontrolled resurgence of cases.”The country recorded 24 new virus cases locally on Friday, with more than half coming from a cluster originating from Changi Airport. The number of unlinked infections — the most concerning to officials as they signal undetected spread in the community — has risen to 15 in the past week from 7 in the week before, the health ministry had said Thursday.While the numbers are far smaller than ongoing outbreaks in countries like the U.S. that are charging ahead with opening up, the flareup is a major setback by Singapore standards, as the city-state is one of handful of “Covid havens” that had previously nearly eliminated the pathogen domestically. These places are now struggling to find a path to re-open as their vaccination drives lag major western economies.‘Covid Zero’ Havens Find Reopening Harder Than Taming Virus The new rules are the most restrictive since Singapore went into a so-called circuit breaker partial lockdown in April last year, where schools and most workplaces were closed except for essential services and key economic sectors. Officials at a briefing on Friday emphasized the need to stay at home and only go out for absolutely necessary errands, and said they will review the measures after two weeks.New Rules Amid Upcoming Big EventsThe return to near-lockdown in Singapore puts in doubt high-profile global initiatives meant to showcase its control of the virus. An long-gestating air travel bubble with Hong Kong, set to start May 26, is now unlikely to go ahead on schedule. Singapore was also scheduled to host the Shangri-La Dialogue early next month, which organizers say they remain committed to, and the Davos-based World Economic Forum in August.The new rules Singapore will have for the next month include:Fewer people allowed in shopping malls and showroomsA maximum of 100 people allowed at business meetings and live performances with pre-event testing, and up to 50 people without such testingOperating capacity at attractions cut to 25% from the current permissible capacity of 50%Wedding receptions will not be allowedPrime Minister Lee Hsien Loong said Friday authorities are testing more intensively and trying to ring-fence transmissions, and the stricter restrictions are needed to stop more cases from happening. “The new measures will be difficult for everybody,” Lee said in his Facebook post.Hong Kong Travel BubbleOfficials in both cities have signaled that the highly anticipated bubble, first scheduled to start last November, will be delayed again in light of the outbreak in Singapore.Transport minister Ong Ye Kung said at a Friday briefing that it’s very likely that Singapore “may not meet the criteria” for the arrangements to go through; the government will make an announcement early next week on the bubble’s fate after reviewing local cases.According to the terms of the agreement, the travel bubble will be closed for two weeks if the seven-day moving average of the daily number of unlinked local cases is more than five in either city. It’s currently just above 2 in Singapore and near zero in Hong Kong.There’s a “high chance” the air travel bubble may not go ahead as scheduled, Hong Kong Secretary for Commerce and Economic Development Edward Yau said Friday, citing Singapore authorities. Yau said he will speak to Singapore’s new transport minister S. Iswaran early next week.Read more: Hong Kong-Singapore Travel Bubble in Doubt as Covid SpreadsJob SupportGiven the new ban on dining-in, the Singapore government will increase job support subsidies for food and beverage firms as well as waive rental for one month for hawker stall and coffee shop tenants.It is also stepping up virus testing from May 15, and will start using rapid test kits for people with symptoms at health centers.The country has fully vaccinated over 22% of its population, or about 1.3 million people, as of May 13, the health ministry said in its statement. While that’s the fastest in Asia, it lags the U.S at 36% and Israel at 56%. On Thursday, the number of new local cases rose to 24, the highest since July last year. Changi Airport is now the single biggest cluster of Covid cases, raising fears that travelers have spread the pathogen to airport staff and visitors despite strict post-arrival quarantine regulations.(Updates with vaccination statistics in second last paragraph. An earlier version updated with Singapore stocks closing prices in third paragraph, Friday’s new case numbers in fifth paragraph, comments from officials and Lee in seventh and tenth paragraphs.)For more articles like this, please visit us at bloomberg.comSubscribe now to stay ahead with the most trusted business news source.©2021 Bloomberg L.P.

Sat May 15 , 2021
A traveler wearing a protective face mask and gloves departs the arrivals section of the international terminal of Kingsford Smith International Airport the morning after Australia implemented an entry ban on non-citizens and non-residents intended to curb the spread of the coronavirus disease (COVID-19) in Sydney, Australia, March 21, 2020. […] 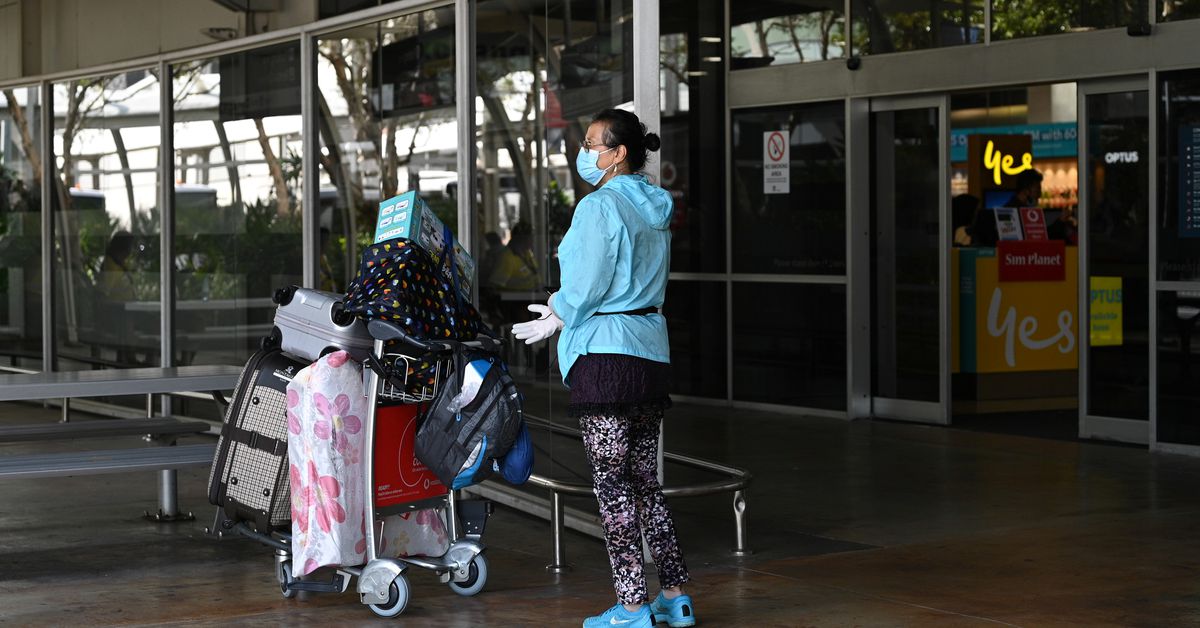