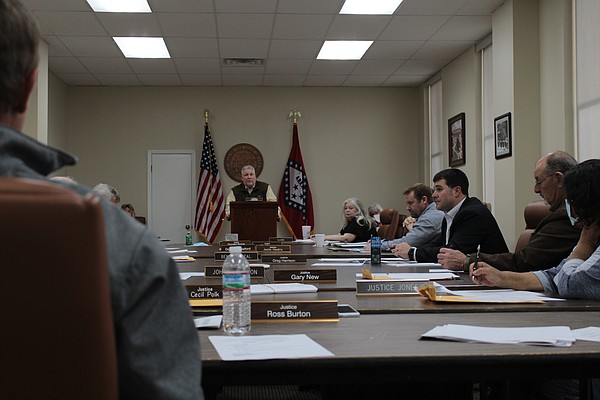 The Finance Committee of the body recommended support of the ordinance funding the survey to the tune of $34,800 after meeting with a representative of the Fayetteville-based consulting agency Johanson Group earlier this month.

“The Finance Committee met with the Johanson Group and what they’re going to provide for the county … will cost $34,800 and will take about 90 days,” Mike Dumas, finance committee chairman and District 1 Justice of the Peace, said.

A proposal for the survey, outlining the focus of the study, the methods that will be used to undertake the study and the final product to be delivered to the Finance Committee and Union County Judge Mike Loftin, was submitted by Bruce Johanson, co-owner of and principal partner at Johanson Group.

According to the proposal, the survey is to be undertaken in three phases. The first phase will involve developing job descriptions for 87 positions in the county and rating them using a copyrighted rating system developed by the firm.

The rating system measures the knowledge and skill requirements of a job, the responsibilities of a job, the contact a worker has with others in the course of their job and the efforts a worker undertakes in doing their job, according to the proposal.

Dumas said the survey will compare the 87 county jobs identified by the Johanson Group against other public jobs within a 50 mile radius. According to the firm, it has worked with other Arkansas counties, including Garland, Pulaski and Washington counties, where Hot Springs, Little Rock and Fayetteville are located, respectively, on compensation management studies.

Representatives of the firm will make several on-site visits during the duration of the survey. A summary report with salary recommendations will be presented to the county judge and Finance Committee upon completion.

Loftin said in February that the Quorum Court could reconsider raises for county employees once the salary survey is complete. Last year, the body approved 3% raises for all county employees except Union County Sheriff’s deputies, who were to receive 6% raises; however, they rescinded the raise ordinance in March 2020 after the coronavirus pandemic hit Arkansas.

“It’s good to know what our competition is,” said District 7 JP Johnny Burson on Thursday. “What we really want to compare it to, I think, is to compare it to the other counties who are working under the same constraints as us.”

District 6 JP Cecil Polk also noted that preliminary results of the latest United States Census, which was undertaken last year, will likely be in soon — Union County Treasurer Debbie Ray said potentially as soon as next month — which will also be something for the Quorum Court to consider when reviewing the salary survey report.

Only District 10 JP Donald Brock was absent for this month’s meeting, due to travel, Loftin said. All present JPs voted to fund the salary survey.

The study was to start immediately, Dumas said on Friday.