Editor’s note: This is the final installment of a three-part series. The first installment ran in Tuesday’s edition of The Commercial Dispatch, and the second installment was printed in Wednesday’s newspaper.

Brad Haines was clean, but he wasn’t happy.

In December 2013, he went before Judge Lee Coleman, pleaded guilty and had his offense non-adjudicated. Thanks to letters from the Newmans, people from his church and several friends on his behalf, the crime was expunged from Haines’ permanent record, and he was sentenced to a small fine and three years’ probation.

Still, the shame, guilt and depression persisted. Every time Haines left his house, he thought anyone who saw him viewed him as an addict and a “scumbag.”

He was happy with Marlee, but he rarely saw her. Per the terms of the custody agreement, Haines was entitled to spend time with his daughter every other Wednesday, every other weekend and every other holiday, but that was it.

Without a solid job history, Haines found it hard to find full-time work. He worked odd jobs — construction, landscaping, whatever he could find.

In March 2016, he was working for his friend Jep Cole’s wrecker service when Tim Younger came in. The Columbus-Lowndes County coach-pitch youth baseball league based at Propst Park had just had its draft, and one volunteer coach’s first practice didn’t go very well. The man spent the entire time yelling like a drill sergeant, demanding push-ups here and sit-ups there. The group of 9-year-olds never even touched a baseball.

“That guy right there is a baseball coach,” he said. “He’ll coach it.”

Asked if he would, Haines demurred. Still ashamed of his history with drugs, he was unsure he’d be welcome around the kids. But later that night, he talked to a parent of one of the players, who put his doubts at ease.

Haines took over the team. From the first practice, he was in love.

“I remember driving home that night going, ‘Man, this is the best I’ve felt in 10 years,’” he said. “‘I got to play baseball with a bunch of kids, and it feels fantastic.’”

The team didn’t do well that season, but to Haines, it hardly mattered.

“We didn’t win a whole lot of games, but it gave me joy and happiness again,” he said.

At the end of that park season, he was asked by a couple friends to help out in travel ball. Haines held several different roles within the Possum Town Sluggers organization — now Next Level Baseball — coaching kids aged 9 through 12.

The whole time, though, there was something he was still missing.

“I always knew I kind of wanted to get back into high school ball, but I was kind of waiting for those doors to open,” he said.

In 2019, Haines and Next Level founder Lance Dawkins took a step back from the travel league.

Haines saw an opening for an assistant coach with the Caledonia school system, leading the middle school program. One question on the application gave him pause: “Have you ever been convicted of a felony?”

Though Haines’ offense wasn’t a felony and was no longer on the record, he still tipped off middle school principal Karen Pittman during his interview process, making sure she wasn’t in the dark on his past.

“Because it helps,” Haines replied.

He got the job, spending the 2019-20 season at Caledonia. Both there and this year at Heritage Academy, he’s done his best to share his story with his players, showing them, ‘‘Here’s where I’ve been.”

“I didn’t want anybody to know about it, and now I’ll tell anybody,” he said.

To Haines, sharing that story can mean more than one might think. He’s seen multiple former New Hope players struggle with addiction and has seen some succumb to it, wondering if he could have done anything to change their path.

“The common denominator in all of them is I never said anything to them when they were playing,” Haines said. “What if I had done a better job coaching or been a better influence?”

Dusty Snider, a member of the first New Hope team Haines ever coached, is one such player. Now clean, Snider recently started Crossroads Sober Living on Alabama Street in East Columbus. Haines helps Snider out with the building — formerly Dr. James Wiygul’s dentist’s office — which can now house up to 20 people.

Haines continues to give back to his current players. He texts them constantly, wishing them happy birthday or just chatting about anything. His good friend David Dees, whose son Dylan played under Haines on Caledonia’s middle school team, said Dylan can always reach out to Haines if he needs to.

“If Dylan can’t talk to me about things, he always calls Coach Brad or texts Coach Brad,” Dees said.

Those topics aren’t always routine. Haines once heard from a high school player who had just found out his girlfriend was pregnant and didn’t know what to tell his parents. The coach was the first person the player called, asking for advice.

Haines is always happy to give it. He talked about being a “transformational” coach focused on effecting change rather than a “transactional” one who simply welcomes players in and sees them off without substantial interaction.

“You just hope that your impact is positive enough that you’re making a difference in their lives,” Haines said, quoting a favorite phrase: “A player has to know you care before they care about what you know.”

Even with Haines’ past, no player or parent has ever shied away. Dees, who got to know Haines about a year into his recovery, said he’d trust Haines to host Dylan and his siblings for a night or a weekend — Haines, after all, is like an uncle to them.

“I think it says a lot for where Brad’s at for people to trust him again with their kids,” Dees said.

‘More than just me’

At 9:30 a.m. March 15, while at his job at Irby Electric, Haines checked his phone to find nearly 20 texts from friends, players and relatives that he’d missed while the device sat silent.

“Congratulations,” some of the messages read. “Happy anniversary,” said others.

The prior night, Haines had typed out the newest edition of the Facebook post he makes every year on the same date celebrating another 365 days of sobriety. He planned to post it at 7 a.m. the following morning, but he forgot.

Still, the people in his life remembered. Heritage Academy senior third baseman Aaron Downs, whom Haines had recently told about his addiction, was one of those who reached out.

So did a woman from South Carolina whose daughter went to school with Haines in the early 1990s. She sent him a friend request and reached out, saying her nephew was going through something similar, and Haines and the woman traded messages.

“There’s more than just me who dealt with addiction,” Haines said. “You can’t throw a rock and not hit somebody affected by it.”

Even at Heritage Academy, there are connections. When Haines was living in Water Valley, he heard from the Newmans about their granddaughter Miriam “Moe” Reed, who at the time was playing basketball at Delta State.

Barbara Newman died in 2019, and W.R. is in poor health, but Reed — as fate would have it — is now in her second year as the Patriots’ girls basketball coach. Recently, she found out about the impact her grandparents had on Haines and came to the baseball team’s field house.

“Alright, which one of y’all is Brad?” she asked the surprised coaches. “They told me I needed to come see you.”

As Haines continues to build connections with those who hear his story, he’s drawn closer to his family and friends. Haines often talks about how much Dees helped him along the way, but Dees said Haines has been equally as important to his own family.

“He’s made just as big an impact on our family that I think we’ve made on him,” Dees said.

Haines sees Marlee more and more, and the two are closer than ever. They call each other “bestie” and Snapchat back and forth every morning, saying they love each other.

Last year, just before the COVID-19 pandemic, Marlee was assigned a school project at New Hope about her personal hero. She chose her father.

“Never in a million years did I think she’d pick me,” Haines said. “Her mother’s been there for her. Her mother wasn’t absent when she was younger and doing pills and all that kind of stuff.

“I sat there and cried the whole freakin’ night,” he admitted.

More than eight years since he last took a pill, Haines concedes he still has a few things to work on. He still smokes occasionally and partakes in dipping tobacco, habits he knows he should break.

But now, the only true addictions in Brad Haines’ life are good ones.

Thu Apr 22 , 2021
HONOLULU (KHON2) — Inter-island travel will be much easier for vaccinated Hawaii residents starting on Tuesday, May 11. KHON2 spoke with several residents who are excited about the change. [Hawaii’s Breaking News–Download the FREE KHON2 app for iOS or Android] Multiple residents said the new protocols should have already been […] 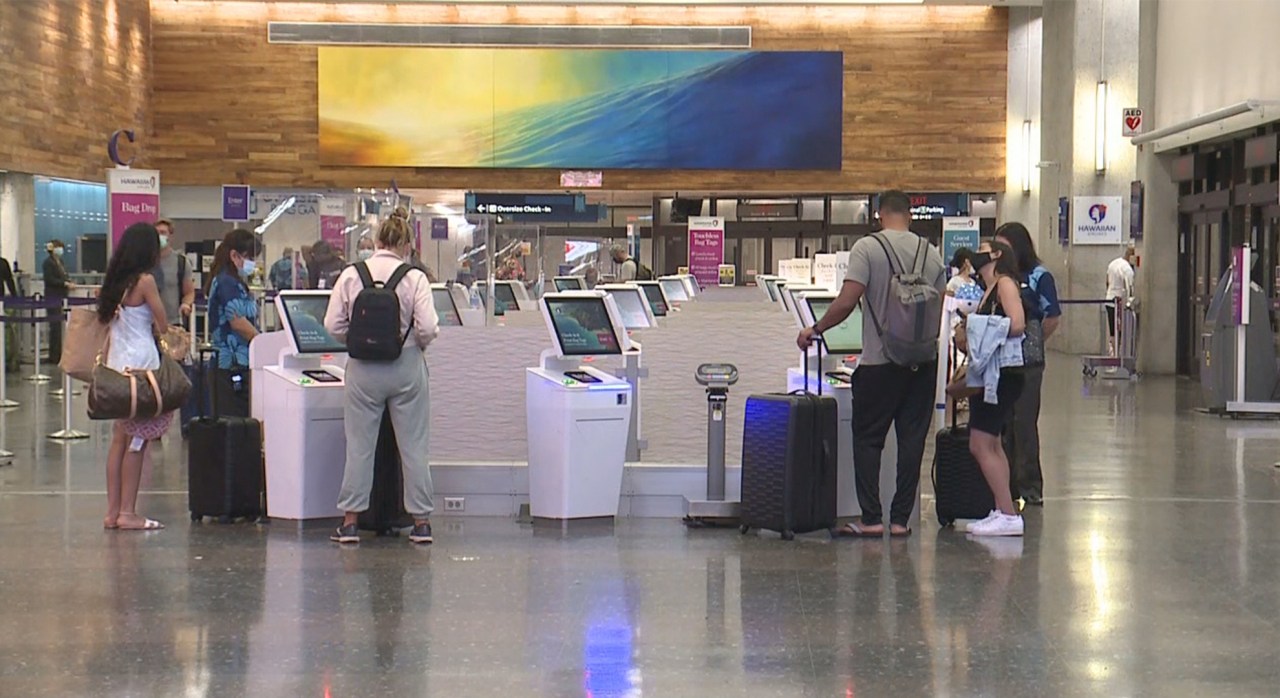