AMERICUS – Going into the bottom of the sixth inning, the Southland Academy Raiders (SAR) trailed Tiftarea Academy (TA) 7-2. The Raiders had struggled all day against the strong and dominant pitching of TA starter Hayden Murphy. In the sixth, the Panthers brought in reliver Ben Matt to close out the game, but the Raiders had other ideas. SAR was able to score three runs on two hits and two TA errors in the sixth to get back in the game. However, the Raiders’ comeback effort fell two runs short in the bottom of the seventh. With two outs, a man on first and the tying run at the plate in the form of Will Godwin, Matt was able to strike out Godwin to end the game and hand the Raiders a 7-5 loss on Tuesday, April 6 at the Southland Academy baseball complex.

According to SAR Head Baseball Coach John Brady, Tuesday’s loss to the Panthers, as well as others this season, came down to the inability to get timely hitting with runners on base.

“In the games that we’ve lost this year, we’ve left some runners on base and have been one hit short, or either had one play that didn’t go our way. We didn’t quite make a play and that was kind of the case today,” said Brady. “We had a couple of opportunities. We just didn’t make a play or didn’t get a hit at the right time. That’s baseball and they (TA) have got good pitching, so it’s hard to get those hits when you need them, but we battled…two good baseball teams going at it. We’ll get after it again on Friday.”

The Raiders will travel down to Chula, GA on Friday, April 9 to take on TA at their place in a doubleheader. The first pitch of Game 1 is scheduled to be at 4 p.m.

The loss on Tuesday brings the Raiders’ overall record to 5-7 and they are now 0-4 in the GISA Region 3-AAA standings. 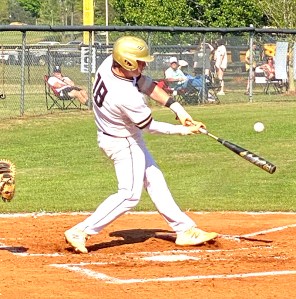 Southland Academy’s Chase Ledger was able to drive in two runs in the bottom of the sixth inning to help bring the Raiders to within two runs of tying the game.
Photo by Ken Gustafson

SAR starting pitcher Buddy Brady had a solid day at the plate. Brady went 3 for 4 with three singles to lead the Raiders’ attack. Shortstop Owen Exley also had a good day at the plate, as he went 2 for 3 with an RBI single in the bottom of the sixth that got the Raiders back in the game.

While Brady had a good day offensively for SAR, he had some difficulty on the mound, giving up three runs on five hits, while walking two batters and striking out two in a little over two innings of work. James Griffin came on in relief of Brady in the third inning. He gave up four runs on five hits, walked one batter and struck out five in three innings of work. Henry Johnson was the third and final pitcher used by the Raiders. Johnson gave up no runs and only one hit, while striking out two TA batters. 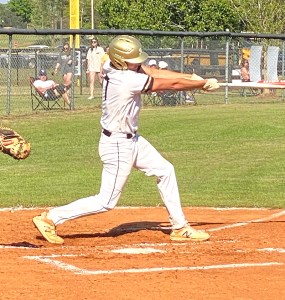 Southland shortstop Owen Exley went 2 for 3 with a single, a double and two RBIs in the Raiders’ 7-5 loss to Tiftarea Academy.
Photo by Ken Gustafson

In the early innings of the game, the Raiders struggled against the pitching of Hayden Murphy, who has gotten the attention of colleges such as Auburn, as well as MLB scouts. Murphy pitched a little over five innings and gave up five runs on five hits. He walked four batters, but struck out seven in the first five innings.

Murphy also had a great day at the plate. He Went 4 for 4 with a home run, a triple, two doubles, three RBIs and three runs scored to lead the Panthers’ attack.

After the first inning, the score was tied at 1-1, but the Panthers scored one run in the second and one in the third on a solo home run by Murphy to take a 3-1 lead. Then in the top of the fourth, TA added to its lead when Murphy drove in a run on an RBI double. This was followed by an RBI single from Levi Stanfill to give the Panthers a 5-1 lead. 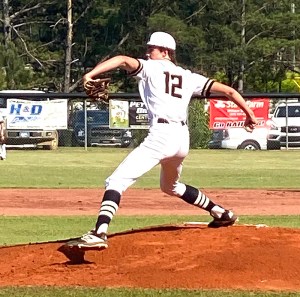 Southland starting pitcher Buddy Brady on the mound for the Raiders against Tiftarea Academy. Brady gave up three runs on five hits, walked two and struck out two TA batters in a little over two innings of work.
Photo by Ken Gustafson

Fortunately for the Raiders, they had a response in their half of the inning. Both Brady and Perry Usher singled to start the bottom of the fourth, giving SAR two runners on base with nobody out. Greer Hagerson then executed a sacrifice bunt and the Raiders had two runners in scoring position with only one out.

Murphy was able to strike out Will Godwin for the second out, but walked Nathan Duke to load the bases for Henry Johnson. Johnson was hit by a pitch, allowing Usher to score and bringing SAR to within three runs at 5-2. However, with the bases still loaded and two outs, Murphy got Chase Ledger to ground out to third to end the Raiders’ chances for a more productive inning.

In the top of the sixth, the Panthers got two insurance runs that proved to be key in their victory. With two outs, Murphy belted a triple and was driven home by Stanfill on an RBI single. Stanfill was able to advance to third base on two wild pitches. Then Ben Matt reached on a dropped third strike that allowed Stanfill to score from third. Just like that, TA had a 7-2 lead going into the bottom of the sixth inning. 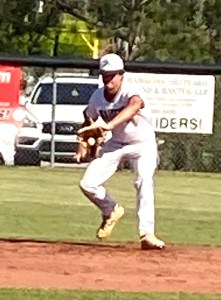 However, this is when the Raiders would finally have their big inning. With one out, Godwin was able to draw a walk. Nathan Duke then reached on an error and Henry Johnson singled to load the bases for Ledger. Ledger then hit a ground ball that was booted by the TA third baseman, allowing two runs to score. Owen Exley followed that up with an RBI single, scoring Johnson from third and bringing the Raiders to within just two runs at 7-5. However, the Panthers were able to get a crucial second out when Ledger was picked off at third base. Matt was then able to strike out James Griffin to end the Raiders’ big inning. 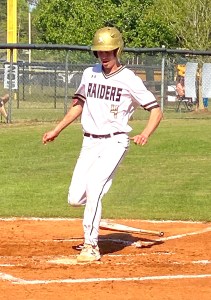 Henry Johnson scores the Raiders’ first run of the game on an RBI double by Owen Exley.
Photo by Ken Gustafson

In the top of the seventh, the Panthers were able to put runners at first and second with two outs, but SAR relief pitcher Henry Johnson was able to get Brock Hammond to ground out to end the threat.

Trailing 7-5, the Raiders had one more opportunity to tie or win the game in the bottom of the seventh. The frame started off well as Brady led off with a single, bringing the tying run to the plate in the form of Perry Usher. However, Ben Matt was able to strike out Usher for the first out. He then got Hagerson to ground out into a fielder’s choice and struck out Godwin to end the game. 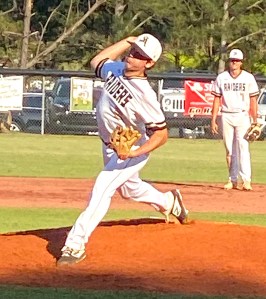 The Raiders (5-7, 0-4 Region 3-AAA) will have two more chances to earn wins against TA and to get their first region victory this season. They will travel down to Chula, GA on Friday, April 9 to take on the Panthers in a doubleheader. The first pitch of Game 1 is scheduled for 4 p.m.

Thu Apr 8 , 2021
LONDON – Britain’s slow but steady march out of a three-month lockdown remains on track even as coronavirus cases surge elsewhere in Europe, Prime Minister Boris Johnson announced Monday, as he confirmed that businesses from barbers to bookstores will be allowed to reopen next week. Johnson said it’s too soon […]