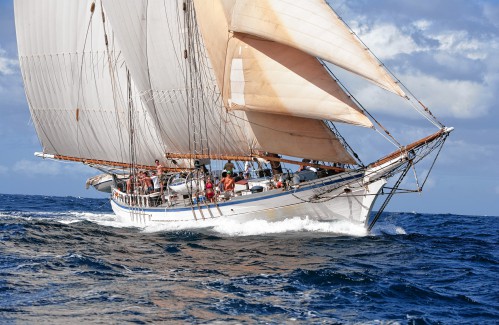 The program will include a voyage from Charleston, S.C., to Mobile, Ala., with a focus on slavery and racism in America.

“Any time you can collapse the distance between theoretical and hands-on learning, you create powerful opportunities for growth and character development. The lessons stick,” said Proctor Head of School Mike Henriques. “We have been doing this both on and off campus for decades, and this new partnership will allow our students to both better understand the collaboration and skills required for maritime travel and the very real, undeniable history that is woven into the fabric of this country.”

In January 2020, the winter program was created to give students who may not have been able to participate in the fall semester-at-sea program aboard the Roseway schooner owned by the World Ocean School based in Boston.

Interest in Proctor’s fall semester program aboard schooner Roseway has increased beyond the capacity of one sailing ship. So they will now be working with two ships, Roseway and Gamage, to enable additional students to access the adventure of going to sea.

Director of Communications & Strategic Initiatives Scott Allenby said the school had 77 students apply for this past year’s fall semester at sea, which has only 20 spots.

The Harvey Gamage will sail from South Carolina around Florida, through the Caribbean and end up in Alabama. A big focus will be studying race, the history of slavery and the economics of Southern ports, Allenby said.

While voyaging between Charleston, S.C., and Mobile, Ala., students will be on a continuous watch rotation and take over full operations of the ship as crew. In addition, they will learn the scientific principles of meteorology and marine biology as well as the history of the region while earning academic credits.

When the ship arrives in Mobile, the crew hopes to meet with members of the Africatown community, which was founded by descendants of the slave ship Clotilda, an 86-foot schooner that illegally brought back 110 people from Benin, West Africa, in the spring of 1860, almost 50 years after the slave trade was outlawed in the US, according to school officials.

“It is very exciting that Proctor is expanding it’s winter off-campus experiential learning opportunities by offering a program to our students and those from very different backgrounds,” said Proctor Academy Ocean Classroom Director Brooks Bicknell. “This mixes adventure, authentic challenge, hardship and skill building, while being immersed in the study of our watery planet. I am also very excited the program will have a strong historical focus that delves into not only general maritime history, but the exploration of the economic and historical roots of slavery in America.”

Allenby said many students that have participated in the ocean classroom program go on to study marine biology in college, some attending Maine Maritime Academy.

“It’s absolutely an inflection point in their lives,” Allenby said. “We see it on all of our off-campus programs, but I think ocean classroom in particular, it’s such an intense experience living at sea, and for some students, it absolutely kind of sets the course for the rest of their lives.”

Proctor Academy, a private co-ed boarding and day school in Andover, has five different off-campus programs, similar to a college or university.

This fall will mark 27 years of the academy’s ocean classroom offerings.