WHIPPS VISIT:
The Palauan president is to visit Taiwan on a chartered flight from Sunday next week to April 1, his first overseas trip since he took office on Jan. 21

A “travel bubble” is to open between Taiwan and Palau, with the first tour group to depart on April 1, the Central Epidemic Command Center, the Ministry of Foreign Affairs and the Ministry of Transportation and Communications announced yesterday.

The agreement would allow travel between the two nations without strict quarantine rules, said Minister of Health and Welfare Chen Shih-chung (陳時中), who heads the center.

The bubble is a first for both countries, Minister of Foreign Affairs Joseph Wu (吳釗燮) said, adding that the deal highlights the impressive success of Taiwan’s and Palau’s fight against COVID-19, and symbolizes the stable friendship, mutual respect and trust between them. 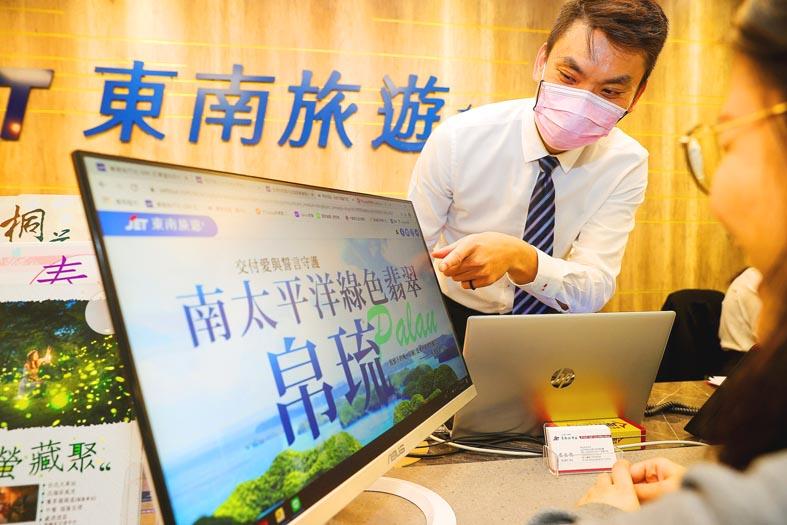 Palauan President Surangel Whipps Jr is to visit Taiwan on a chartered flight from Sunday next week to April 1, which would be his first overseas visit since he took office on Jan. 21, Wu said.

Whipps would be the first head of state to visit Taiwan since the COVID-19 pandemic began last year, Wu said.

Five principles must be upheld to keep the risk of COVID-19 infection as low as possible while reopening tourism and economic activities between the two countries, Chen said.

Travelers must visit as part of a tour group and no individual outings would be allowed; an itinerary must include routes and rest areas, avoid crowded areas and stay in designated areas to keep tourists separate from locals; tour groups must travel in designated vehicles, which must be disinfected daily; travelers can stay only in hotels that have acquired infection prevention certification from the Palauan Ministry of Health; and tour groups should eat in designated areas in restaurants, with special seating arrangements, and designated entry and exit routes, as well as social distancing, Chen said.

Travelers would need to provide a negative polymerase chain reaction (PCR) result from a test taken at the departure airport in Taiwan before boarding, but would not need to take another test upon arrival in Palau, he said.

Enhanced self-health management means staying in a single room that has its own bathroom, while others in the same household should wear a mask, practice social distancing and avoid eating meals together, he said.

People in enhanced self-health management are allowed outdoors if they do not have symptoms, but are barred from public transportation and crowded areas, he said, adding that they are required to keep a record of their activities and close contacts, while contact with strangers is banned.

A mask should be worn and social distancing practiced while they are outdoors, Chen said.

Deputy Minister of Transportation and Communications Chi Wen-chung (祁文中) said that the first travel bubble flight to Palau is scheduled for April 1.

Initially, there would be two flights per week — on Thursdays and Sundays — operated by China Airlines, Chi said.

A maximum of 110 people from Taiwan would be allowed on each flight, while 48 seats would be reserved for residents of Palau, so a maximum of 220 people would be able to visit Palau from Taiwan each week, he said.

The program would be modified as conditions change, he said.

Testing stations at airports would facilitate PCR testing, but as specimens must be tested in a lab, it would take four-and-a-half to five hours for a result to be returned, during which time check-in procedures could be done, Chi said.

If a traveler were to test positive, they would be hospitalized in Palau, unless they pay for a chartered flight back to Taiwan, Chen said.

People who want to travel should buy travel insurance that covers medical expenses for hospital stays and evacuations, Chi said.