Ohio’s unemployment rate dipped to its lowest level in March since the early days of the pandemic.

The comeback, however, for the jobs that were lost during the early days of the pandemic is much slower.

Ohio’s unemployment rate fell to 4.7% in March, the Ohio Department of Job and Family Services said Friday. That’s down from 5% in February and it matches the rate in February 2020 just as the pandemic was ready to take off and shut down the economy.

Ohio employers added 12,700 jobs in March, and revisions from the February report now show the state lost 2,100 jobs during that month, lower than initial estimates.

But job gains have slowed. Ohio has added 47,700 jobs since September and needs an additional 295,000 jobs to get back to where the state was in February 2020.

“A weaker gain than expected for Ohio jobs in March, but there were still signs of improvement,” Ben Ayers, senior economist at Nationwide, said in a research note. “As consumer spending takes off in the second quarter with COVID concerns fading, hiring should accelerate across the state, especially within service industries which should benefit the most from a return to more typical spending patterns.”

Ayers also said the unemployment rate doesn’t tell the full story because workers have dropped out of the labor force during the pandemic.

Most sectors reported job gains in March, including a gain of 3,600 jobs in the sector that covers private education and health care and a gain of 2,900 construction jobs.

Manufacturers added 2,200 jobs as did the professional and business services sector. The trade, transportation and utilities sector added 1,500 jobs, and government jobs increased by 1,100 during the month.

The hard-hit leisure and hospitality sector lost 1,100 jobs during the month and now has 68,900 fewer jobs than it did a year ago.

Outside of leisure and hospitality, the private education and health care sector has 46,200 fewer jobs than it did a year ago; government employment has fallen 43,900 jobs; manufacturing has cut 33,000 jobs; and the professional and business services sector has cut 26,900 jobs.

Fri Apr 16 , 2021
The Texas unemployment rate remained unchanged in March, but employers added 99,000 jobs, according to data released Friday by the Texas Workforce Commission. The state’s seasonally adjusted unemployment rate held steady at 6.9% as the number of Texans in the labor force grew. In Dallas-Fort Worth, the unemployment rate fell […] 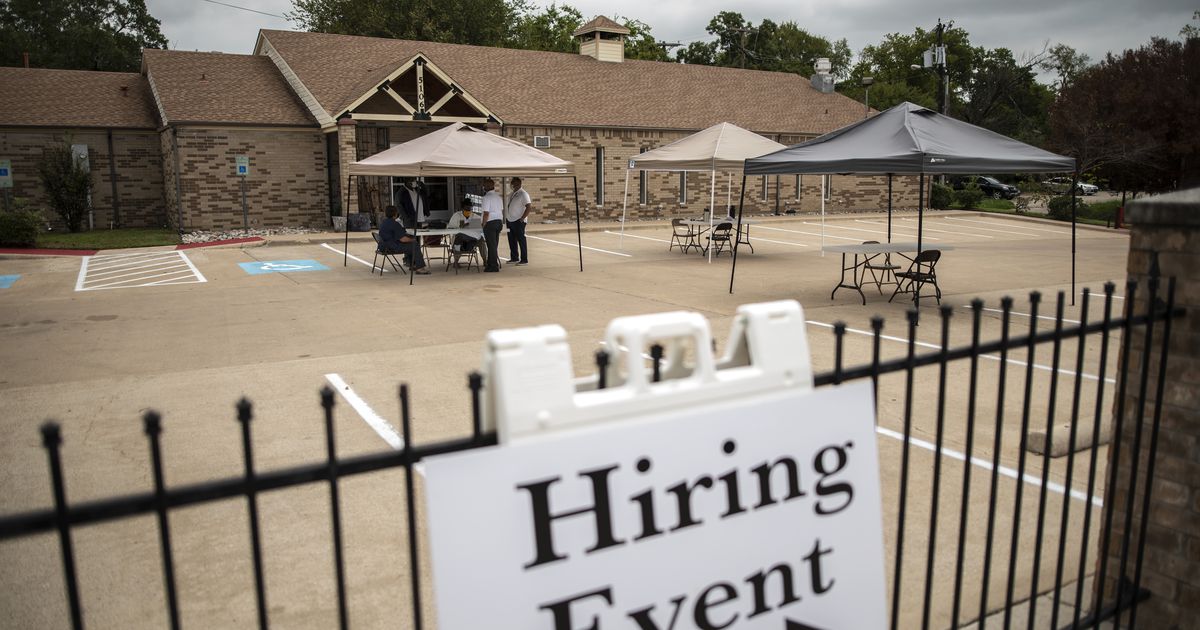