As you likely heard, it was recently announced that the Academy Awards will be held at Union Station on Sunday, April 25.

We’ve received questions from riders about how the awards will impact the station and bus and rail service.

One note: some of the below info could change. If so, we’ll do our best to push new info to riders and the public.

Q: What parts of Union Station will be closed to passengers? When will the closures occur and how will patrons access the station?

A: Select sections of Union Station West will be closed to the public starting April 5 including the Historic Ticketing Hall, the Grand Waiting Room, the North and South Patios and the main entrance along Alameda Street.

The main entrance to Union Station West will be closed from April 5-April 29.

A pedestrian plan is still being formulated for the weekend of the production to help visitors access transit and other amenities through Union Station East. Metro is working to ensure that the path of travel from Alameda to the Passenger Concourse and train platforms, including the Red Cap service, will be robust and accommodating to our patrons. We hope to have details and maps to help navigate productions-related closures soon.

Q: When will operations return to normal at Union Station?

A: Any other production-related impacts to Union Station are expected to be completed on Thursday, April 29, with normal paths of travel returning on April 30.

Q: How will this production affect traffic and parking around Union Station?

The entrance to Union Station West on Alameda Street will be closed to pedestrian and vehicular traffic from 12:01 a.m. April 24 until 4 a.m. on Monday, April 26.

Alameda Street will be closed to pedestrians and vehicles from E. Cesar Chavez Avenue to First Street in front of Union Station from 12:01 a.m. April 25 until 4 a.m. on Monday, April 26.

Q: Will any train or bus lines be canceled or delayed due to the production? What about other services like FlyAway and Megabus?

A: We do not anticipate that any bus or train service, including third-party transportation services, will be cancelled or delayed.

The Amtrak Bus Plaza at Union Station West will be closed from April 5-27. Pickup locations for Amtrak and Greyhound buses will be changing as a result:

• The temporary Amtrak and Greyhound bus pick-up and drop-off will be in front of the Metropolitan Water District building at the southwest corner of the Union Station West driveway from April 5 – 23 and April 26 – 27.

• The temporary Amtrak and Greyhound bus pick-up and drop-off will be south of Parking Lot D, off of Cesar Chavez from April 24 – 25.

Q: Will buses be affected by production-related street closures?

A: On the weekend of the production, bus service on Alameda Street will be rerouted around the production. Bus routes are expected to return to normal on Monday, April 26.

Q: How will Amtrak and Metrolink passengers be affected by the closure of the Grand Waiting Room? Is the customer seating moving?

A: A number of the large, luxurious leather and walnut chairs have been relocated to the center section of the Passenger Concourse for Amtrak and Metrolink passengers. We did something similar during some of the restoration work that has taken place at Union Station in recent years.
Amtrak First Class passengers will still be able to access the Metropolitan Lounge during the Oscars.

Q: How will Metro minimize disruptions to transit riders during this production?

A: Other than bus routes that will be rerouted on Alameda around Union Station and the closure of Metro’s Bike Hub, we do not anticipate disruptions to transit services. Our goal is to make the Union Station experience as normal as possible with announcements, wayfinding and staff helping to route our customers to where they need to go.

Q: How will passengers be informed about closures and changes?

A: Throughout the month of April there will be alternative paths for pedestrian travel, accompanied by signage and personnel that will be strategically placed to facilitate and maintain ingress, egress and the core operations of the station. While the station may look different, the station will remain open and operational.

Q: Will vendors in Union Station West be open before and during the production?

A: Vendors in the Passenger Concourse and in Union Station East will remain open during their normal business hours.
Traxx and Imperial Western Brewery have been closed to the public and will remain closed during the month of April.

Q. Will the Hollywood and Highland station be closed as it has in previous years?

A: Currently, there are no plans to close any stations due to the Oscars.

A: Union Station is the largest multimodal transit facility west of the Mississippi River and Metro’s number one priority and responsibility is to its transit customers. Union Station regularly hosts productions and partners with the entertainment industry while keeping buses and trains running. This production will be no different.

A: There will be heightened security for the Oscars in coordination with Union Station. There will not be any additional Metro Security deployment required.

Q: Will transit riders be subject to increased security during the production?

A: While customers will only be able to access Union Station East the weekend of the production, they can expect to encounter normal security levels while using transit.

Q: How will Union Station accommodate the Oscars in a safe manner during COVID-19?

A: Union Station has ample space and ability to accommodate a medium-sized production while adhering to COVID-19 guidelines such as social distancing.

Q: Is Metro using any extra or additional COVID-19 precautions for this production?

A: Our current protocols meet or exceed what has been required by health experts. The production team has a dedicated professional staff to ensure compliance.

Q: How will Metro prevent large gatherings from occurring at Union Station?

Q: How will this production affect on-site COVID-19 testing on the South Patio?

A: From April 1 through April 30, the Curative COVID-19 testing station will relocate to Union Station East, on the northwest corner of the Patsaouras Bus Plaza. For more information and a map of the location, please visit https://www.unionstationla.com/happenings/free-covid-19-testing

A: Metro has a long history of partnering with the film industry to highlight the history and beauty of Union Station. It has made appearances in countless major motion pictures, music videos and commercials and stands as a shining example of the golden age of railroads. Metro welcomes the opportunity to highlight the history and majesty of this important, historic landmark yet again in its continued partnership with the film industry.

Union Station also provides a safe and controlled environment with adequate space, ventilation and protocols for a COVID-19-safe production. Metro has held a number of COVID-19-safe, virtual only performances during the pandemic.

Q: Where can I find out more information about Union Station and its history?

A: For more information about Union Station and its history, please visit https://www.unionstationla.com/.

Wed Mar 31 , 2021
A new data tracker created by a team at a Harvard University nonprofit shows how the pandemic has impacted small business closures and revenues, among other economic indicators. In Illinois, the percentage of open small businesses fell by 36.5 percent from January 2020 to March 2021. (Credit: […] 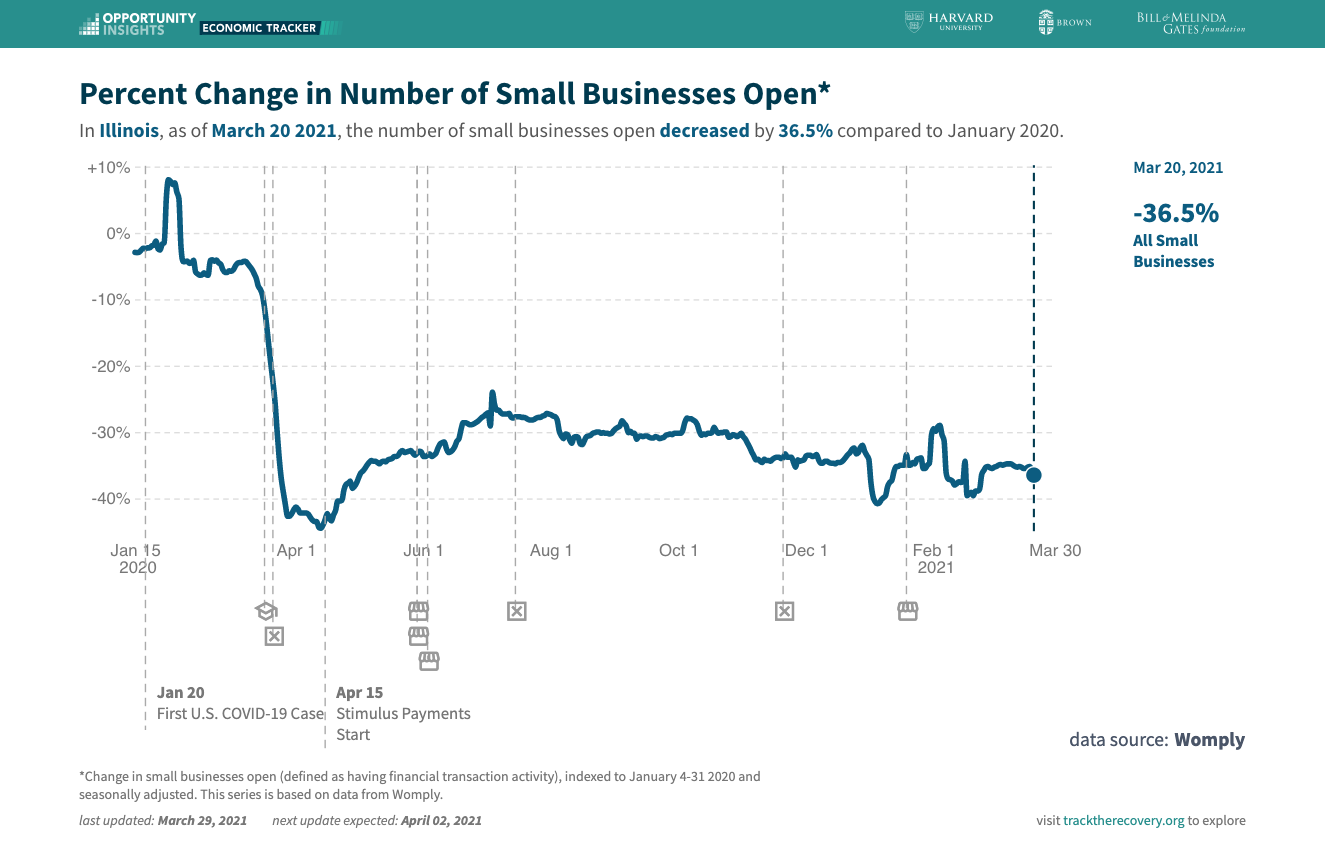