Once their feet were planted firmly back on the ground after having reached a comfortable
cruising altitude of about 1,300 feet, twin brother and sister Zoe and Zaire Gryga,
of Norristown, shared their thoughts on their first time ever flying in an airplane.

“It was awesome,” said Zoe. “I want to go again. The turns made me nervous. I thought
I was going to fall out.”

“It was cool,” said Zaire. “My favorite part was when the pilot went up and down.” 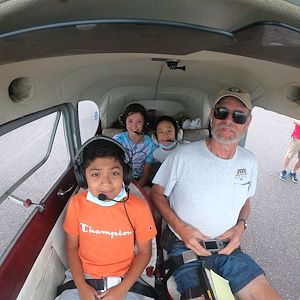 The two rising sixth graders at Eisenhower Middle School in Norristown were among
a group of 31 children who took flights inside a single engine airplane flown by pilots
from the EAA Chapter 1250 at KPTW – Heritage Field Airport in Pottstown July 29. Campers also learned about
aviation and aircraft by talking to pilots and aircraft owners. The trip was organized
as part of Janet’s Planet STEAM/Astronaut Academy Summer Camp hosted by Montgomery
County Community College (MCCC).

MCCC’s Cultural Affairs Department hosted Janet’s Planet during the weeks of July
19-23 and July 26-30 for youth ages 7-14. Each day, the campers experienced a new
mission with expert guests from the scientific community, conducted experiments and
learned about science and space. 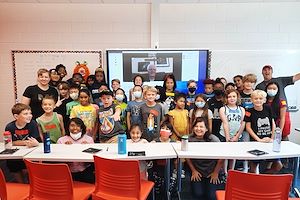 MCCC collaborates with Janet Ivey to bring these educational, enriching summer camps
to the community’s youth. Janet’s Planet presentations have been a favorite of Montgomery
County Community College’s Young Arts Explorer Series for numerous years as part of the Lively Arts Series.

Ivey, an award-winning science educator, is the creator and CEO of Janet’s Planet, a dynamic series that focuses on science, space, history and exploration. The series,
which aired on 140+ public television stations nationwide, has won 12 Regional Emmys
and five Gracie awards. She also serves as the president of Explore Mars, is an active NASA JPL Solar System Ambassador and serves on the Board of Governors
for the National Space Society. 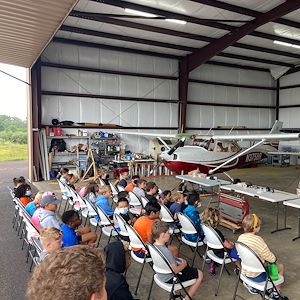 Ivey said she’s always amazed at how much campers know about space exploration and
science at the beginning of each camp but the focus is on educating children to be
the best version of themselves.

“The best kind of astronauts are kind and compassionate,” she said. “And goodness
and compassion is what makes people great.”

“Space has so many possibilities and it’s what engages kids’ imaginations,” said Campbell.
“They talk about this being a STEM camp, science, technology, engineering and math,
and it’s all of those things. But it’s also imagination. And getting that collective
want to do something. She’s really great at tapping into that. It’s a lot of hands-on
activities and what educators would call active learning.” 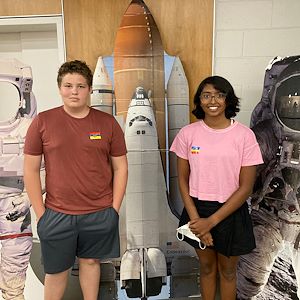 Children who attend the Janet’s Planet Astronaut Academy have the opportunity each
year to visit the U.S. Space and Rocket Center in Huntsville, Ala., for a weeklong experience there. Former campers-turned-volunteers
Alexander Kreitz, 15, of Blue Bell, and Sachita Upadhya, 14, from Plymouth Meeting,
were selected to go this year.

Alexander, a rising sophomore at Souderton Area High School, attended Janet’s Planet
during the summer of 2019 and was scheduled to visit the space museum last summer.
Due to the pandemic, the experience was put on hold until this past June. In the meantime,
last year he volunteered for Ivey during an online version of Janet’s Planet.

“It really actually kind of paved my way to meeting a lot of people in the STEM community,”
he said. “Without having joined the camp, without having met Ms. Janet, I probably
wouldn’t be anywhere near where I am right now.”

“It was like the best five days of the whole summer,” she said. “She sent all of the
materials home. We got to build bristle robots, parachutes with our own materials
and we got to build fizzy rockets and videotape it and send it over to Ms. Janet.”

Ivey praised both students for their leadership during camp and intelligence.

“Both of them are such incredible minds,” said Ivey. “Alex will probably be making
the rocket propulsion systems to go to Mars and beyond. And Sachita will be the astronaut
on there.” 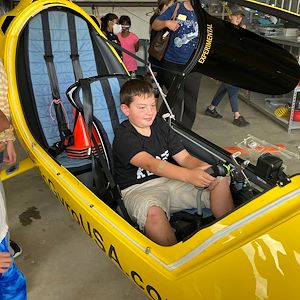 Janet’s Planet is just an example of how MCCC continues to lead the way in innovative,
STEM-based, educational experiences for students. Earlier this year the College announced
the official launch of The Challenger Learning Center at Montco Pottstown. The first of its kind in Pennsylvania, this state-of-the-art
classroom at Pottstown Campus will allow students to explore the far reaches of space,
engage in hands-on learning and pursue careers in high-demand fields. The Challenger
Learning Center is expected to open in fall 2021 inside MCCC’s Sustainability and
Innovation Hub building. Beyond Challenger Center Missions, the facility will host
summer camp programs, elementary school programs, professional development, teacher
training, corporate missions, and more. To learn more, visit Challenger Center or
email [email protected].

This press release was produced by the Montgomery County Community College. The views expressed here are the author’s own.

You can take this job and shove it

Tue Aug 24 , 2021
The pandemic disrupted many Americans’ work lives. Some of us — generally highly educated white-collar workers with relatively well-paying jobs — were able to shift to remote work. Millions of other workers, especially many poorly paid service workers, simply saw their jobs disappear when consumers stopped eating out and traveling. […]