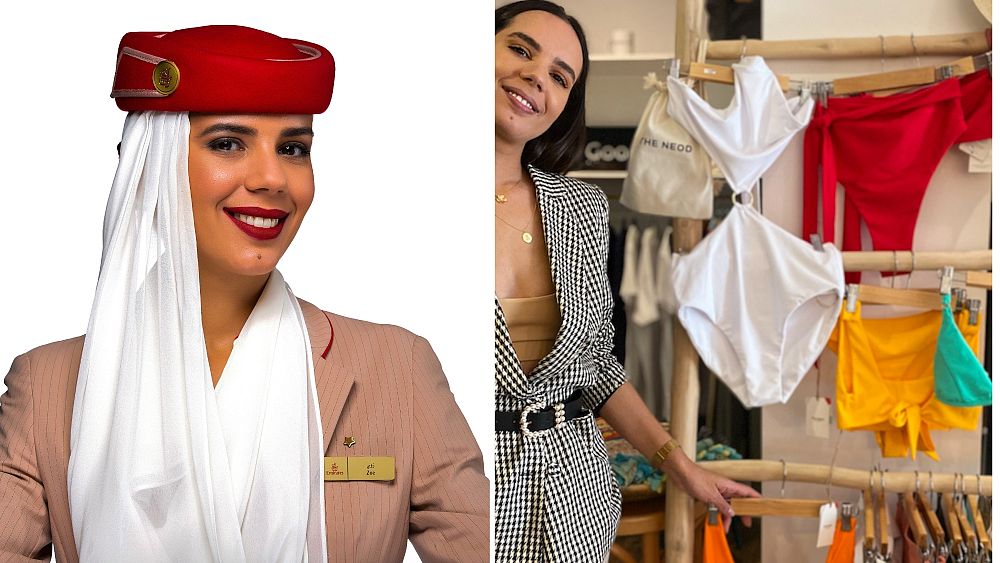 “They removed my wings very violently,” says Anastasia Petridou, who found out in August 2020 that her contract as a flight attendant would end in just a week.

Globally, 400,000 airline workers have been been made redundant, fired, furloughed, or told they may lose their jobs because of the pandemic.

With the International Air Transport Association (IATA) estimating air travel is unlikely to reach 2019 levels until 2024, many former airline staff are faced with needing to find new jobs to make a living.

“I ended up applying for jobs cleaning toilets”

“Look at the numbers! Where are all these people going to go?” asks Anastasia Petridou.

Originally from Drama in northern Greece, Anastasia was employed by AirX, a company operating private flights.

“No one can remove my wings because I invested in this career,” says Anastasia, who worked in aviation for 14 years.

“I was always the stubborn girl who went against her father’s wishes to become a flight attendant,” Anastasia says. Her parents couldn’t afford to pay for her flight attendant training. They would have preferred her to become a teacher or a doctor, so her studies would be publicly funded.

After working for Cyprus Airways and Olympic Air, Anastasia moved to the UK to work for Flybe, Europe’s largest regional airline at the time. The company later hit financial problems and, along with many others, Anastasia was made redundant in September 2019. Flybe eventually collapsed in March 2020.

“It was a traumatic experience, the company was the reason for leaving my country. I struggled a lot, looking for jobs,” Anastasia says. “I applied for more than 300 jobs a month, anywhere, as a cleaner, even as a toilet cleaner. Employers would ask ‘why do you want this job?’ Because I need an income, I would say.”

Luckily Anastasia also applied to be a VIP flight attendant for two private jet companies. On her birthday, in January 2020, she received job offers from both.

She accepted the one from AirX. She had to move cities for the job – VIP flight attendants are on call a lot, so she had to be ready to fly at short notice.

“And then the lockdown happened. I had done my initial training and we were waiting for the flights to start. But there were none.”

Anastasia was soon made redundant and, as she was still in her probation period, she wasn’t entitled to any compensation.

“It was quite hard, I was depressed, my whole life froze. I didn’t see my parents for more than a year. My elder sister is in Germany. My partner is in another country. I couldn’t go anywhere,” Anastasia says.

She finally found a job in November 2020 as a Receptionist for a health clinic in London. It was a full-time position that became part-time when the country went into lockdown again.

“I am always looking for a career in the sky and my wings are always there,” Anastasia says.

“I had a feeling that things would go awry [last] year. I always trust my gut, so I knew I would need a big plan to survive. I was in lockdown at home and it got me thinking about so many things in life. My goals, my passions, my true purpose in life,” says Zoé Gourdon, a 31-year-old from Loudun in France,

Zoé worked as a flight attendant for Emirates before losing her job in June 2020. “I have flown over 5,000 hours and have probably transported about 200,000 passengers over the years,” Zoé says.

At the end of April, Zoé decided to set up her own business in Dubai.

A big fan of Greta Thunberg and a marine conservation volunteer when she was a teenager, Zoé decided to follow her passion and set up ‘THE NEOD’, a company producing sustainable swimwear.

She invested all her savings in the business, including the AED 25,000 (€5,599) she received as compensation from Emirates.

“I had no experience in manufacturing or leading a business, but I decided to take on the challenge and push my boundaries,” says Zoé, whose partner helps her run the company.

“My business had to be in the field of sustainability because I want to tackle today’s consumption habits, especially in fashion, the second most-polluting industry.”

‘THE NEOD’ swimsuits are made of Econyl, a type of nylon produced from waste, such as ghost fishing nets, plastics, and industrial carpets. The swimsuits are manufactured in Bali, at a factory rated as ethical and fair trade.

“Sustainability manufacturing means that the production is done with respect for human values, paying a proper salary and providing social benefits. But also that it gives back – the factory donates part of their profits to local charities,” Zoé says.

“It is very unlikely that airlines will hire again soon and, to be honest, I am now pursuing my passion full-time and I can’t imagine how I could continue if I started flying again,” Zoé says.

If you can handle drunk and abusive passengers at 40,000 feet, you can do anything

For many who give up their wings, it can be daunting to even imagine what other jobs they’ll be good at. 46-year-old Alan Williams from the UK, set up recruitment firm Miramar Connect to help former aviation employees find new careers.

“The success we’re particularly proud of is being approved by the NHS to help with the vaccine rollout programme” Alan says.

Alan was running Miramar alongside his job as a pilot for Thomas Cook. But when the holiday company collapsed in 2019, Alan lost his job and went full-time with recruitment.

“Over the years I had become increasingly impressed by just how capable cabin crew are in dealing with a whole range of issues on board an aeroplane,” Alan says.

“From handling drunk and abusive passengers to dealing with any medical emergency. From delivering efficient service to diplomatically handling any situation that crops up when 400 people are cooped up together for hours on end, tired and sometimes a little scared. They do it all with ease and confidence, any time of the day or night.”

Alan says that he often finds that airline staff underestimate their worth and sell themselves short on job applications.

He wants to convince employers that former aviation employees are great with people, and could be the perfect fit for jobs within “operational, safety-critical, or service-led environments”.

“We tell hiring managers that there is a level of skill, training, and experience that simply wasn’t there pre-pandemic,” he says.

Would Alan go back to flying one day? “Yes, maybe there is no greater feeling than flying a passenger aircraft in challenging conditions or enjoying that (very) rare cocktail in an exotic location! But I face the same problems as everyone else. Will I have to relocate my family for a highly fatiguing, patently unhealthy job, where terms are being squeezed to a point where burn-out is a real prospect? That’s the point for employers: many people will have had time to reflect and realise that maybe there is a life outside of aviation,” he says.

British Airways is cutting 12,000 jobs as a result of the pandemic, and Dan Storer, from Plymouth in the UK, is one of 6,000 staff who applied for voluntary redundancy.

He had worked as cabin crew for the airline for 15 years before he took his final flight. “When we landed in London, the captain announced over the tannoy that I was leaving and they all applauded, and afterwards, the crew gave me some lovely gifts,” Dan says.

With a university degree in Modern Languages and European Studies, Spanish and Russian, Storer is now retraining to be a secondary languages teacher with Transition to Teach, a government-funded initiative.

Dan says becoming a flight attendant seemed like the best way to travel while also earning a living. He started as cabin crew following an 8-week British Airways training course in flight duties, customer service and safety procedures. He worked his way up from short to long-haul flights and eventually led teams of up to 22 people.

“People travel for so many reasons – happy and sad – but it was always a pleasure to share stories and cups of tea with passengers on long overnight flights,” Dan recalls.

“I am not sure if I could go back to flying full-time. It was an amazing time in my life, but I am now pleased to be at home more and have a new focus. Seeing the progress the children make every day is a million times more satisfying than anything I have done before,” Dan says.

Every weekday at 15.30 CET, Euronews Living brings you a cutting edge, environmental story from somewhere around the world. Download the Euronews app to get an alert for this and other breaking news. It’s available on Apple and Android devices.