Not long after the Clippers signed prize free agent Kawhi Leonard in July 2019, Johnny Wilkes, the self-described best friend of Leonard’s uncle, drafted a list of requests for the team.

Wilkes wanted a job as the team’s vice president of special events. He wanted a five-year contract. He wanted a staff of four to five people. He wanted the use of four courtside seats and a skybox. He wanted to suggest local coaches to hire for the Clippers’ G League franchise. And he wanted $2.5 million in exchange for his purported role in Leonard choosing the Clippers.

The list, which Wilkes testified he presented to Clippers consultant Jerry West during lunch in Beverly Hills two weeks after Leonard signed, misspells Wilkes’ last name and erroneously refers to Leonard as “Kawi.”

“Over the past 2 years, Johnny Wileks worked with Kawhi to position his need to come ‘back home’ so that it was specifically as a member of the ‘LA Clippers’,” the one-page document said. “Johnny consistently pursued several networking opportunities where he then became a center of influence for Kawhi Leonard. Therefore, representing the interest of the LA Clippers. The 2-year network building investment was close to $200,000 used for air travel; hotel; cars etc. in networking to ‘bring Kawi Home’. With that in mind, I am asking for a cash infusion to a non-profit or a Trust of $2.5 Million which equals the commission given to an NBA agent who on average gets about 2-2.5% of the player’s signing contract.”

The document was filed in Los Angeles County Superior Court last week as part of a motion by attorneys for the Clippers and West to dismiss all counts in Wilkes’ breach of contract lawsuit against them. Wilkes sued in December, alleging West reneged on an agreement to have the Clippers pay him $2.5 million in exchange for helping the team sign Leonard.

The filing alleged Wilkes was “desperate in an attempt to cash in on a distant connection” to Leonard and noted the list of requests doesn’t mention any agreement between Wilkes and the Clippers or West.

The Clippers declined to discuss the filing Wednesday, while the attorney for Wilkes, Kenechi R. Agu, didn’t return requests for comment.

While Leonard prepared for meetings with suitors including the Clippers and Lakers in 2019, Wilkes alleged that he spoke by phone with West on June 28, days before free agency began. According to his initial complaint, Wilkes provided “vital” information for the Clippers’ pursuit of Leonard by relaying talking points that he was believed to want to hear from executives courting him. Those talking points included that Leonard would have a “great life as a Clipper” and would be joining a Clippers roster with “a great deal of upside” that would compete hard with LeBron James and the Lakers by attempting to acquire a second superstar talent in Paul George, whom the Clippers indeed traded for days later.

The call was discussed at length during Wilkes’ deposition taken last month and excerpted in exhibits attached to the court filing.

“On this telephone conversation, my question to you is was there any negotiation after you said to Mr. West, ‘I’ll pay’ — ‘I want $2.5 million’? Lyons asked.

“He said Mr. Ballmer would take care of me,” Wilkes responded.

“What did you tell Mr. West you were going to do to make the princely sum of $2.5 million?” Lyons said.

“I didn’t discuss anything at that time on the telephone with him,” Wilkes replied.

“Just so I’m clear, as far as your understanding, what did you think Jerry West was going to be paying $2.5 million for?” Lyons said.

“For my help trying to get Kawhi Leonard to sign with the Clippers,” Wilkes responded.

“Just so I’m clear, in terms of help, had you told Jerry West that you were going to do anything?” Lyons said.

Wilkes started to say, “You have to understand …” before being cut off.

“I don’t have to understand anything,” Lyons said. “I’m asking you to listen to my question and answer my question. Did you tell Jerry West that you would do anything for $2.5 million?”

“At that time, no,” Wilkes replied.

During the deposition, Wilkes described communicating with Sam Watson, known for his involvement in boxing, who along with broadcaster Jim Gray relayed information to West. Asked by Lyons what information he provided to West, other than that the Clippers should emphasize to Leonard that joining the team would benefit his career and life after basketball, Wilkes said the talking points were “the most important thing, because that’s what [Leonard’s uncle Dennis Robertson] asked me to sell to everybody, so I’m just doing what Dennis asked me to do, sir.”

Wilkes’ lawsuit also claimed that at the direction of West and the Clippers, he told Robertson, that if Leonard signed Robertson would receive a house in Southern California, a travel expense account and a marketing campaign for Leonard funded by team owner Steve Ballmer worth $100 million.

“Mr. West and the Clippers deny the existence of any agreement with Plaintiff or ever directing him to relay information to any third parties on their behalf,” the filing said.

Leonard was the NBA’s most sought-after free agent in 2019, only weeks removed from earning his second NBA championship and Finals MVP honor of his career after Toronto’s title-clinching victory over Golden State.

West has previously denied any improper conduct and the team has called the allegations baseless. It is a potential violation of league rules for players or their representative to receive value outside of an NBA contract, NBA general counsel Rick Buchanan said in December. The league’s investigation is ongoing.

The next hearing in Wilkes’ lawsuit is scheduled for June.

“Nobody swayed my mind to go somewhere,” Leonard said Dec. 17. “I’m from L.A. and I grew up here my whole life. And out here, people try to find any way to get some money. It probably won’t be the last. I know a lot of people out here.”

Thu Feb 25 , 2021
In a green, breezy meadow a few kilometres from the coast in West Flanders, Belgium, Nele Bekaert fetched her 1 tonne Brabant draft horse, Axel. After she strapped an old-fashioned wooden saddle to Axel’s back and hitched a cart to the rear cantle for her fishing gear, she and I […] 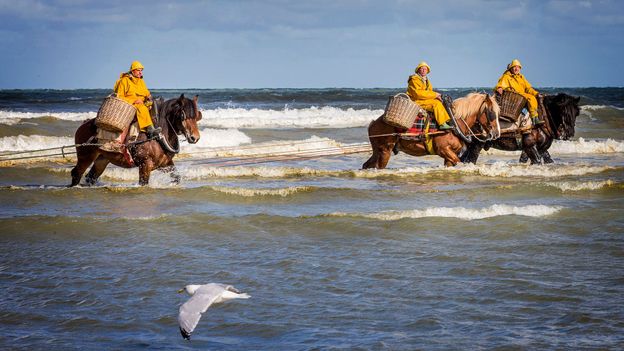