Maine continued to add jobs at an even higher clip in March, seeing its highest gains since September.

That’s more than the job gains seen in February and January — 2,800 and 2,000, respectively — and far above the anemic growth reported in December, when only 400 jobs were created.

March’s job gains were heavily concentrated in education and leisure and hospitality, the two sectors most severely hit with job losses over the past year. Those gains seen in other industries were much smaller, the labor department said.

That positive jobs report comes on the heels of Thursday’s news that the U.S. saw the fewest new jobless claims — 576,000 — since the pandemic began, evidence that the economy may be regaining its strength after the coronavirus-induced recession. It’s a trend economists are optimistic will continue as efforts ramp up to vaccinate more and more Americans against the virus.

Overall, Maine saw job losses across all sectors averaging 4.2 percent, compared with a year ago. There are still about 27,000 fewer jobs than in March 2020.

Steep losses still linger in leisure and hospitality, state and local government, health care and social assistance, and retail. Meanwhile, construction, professional and business services, and a few other sectors have nearly recovered all jobs lost during the pandemic, according to state labor officials.

Maine’s jobless rate remained unchanged from February at 4.8 percent. That’s down from the pandemic high of 10.4 percent in April 2020, but higher than the 3.1 percent reported a year ago, just before Maine saw an end to a historic streak of record-low employment.

That jobless rate is below the national average (6 percent) and the average across New England (6.4 percent). Just two New England states — 3 percent in New Hampshire and 2.7 percent in Vermont — have lower levels of joblessness.

Even as joblessness has sharply declined in Maine, there are still 32,600 Mainers without work across the state, according to Maine labor officials. That surpasses the high seen in April 2009 during the Great Recession, when 28,564 Mainers were out of work, state data show.

If Maine’s labor force participation rate stood at its pre-pandemic level, another 27,800 Mainers would be counted as jobless and the unemployment rate could be as high as 8.6 percent, according to the Department of Labor. 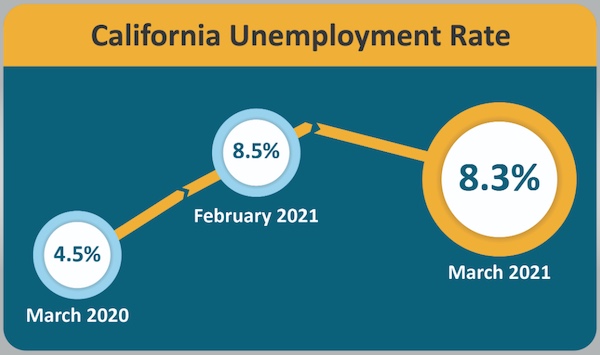