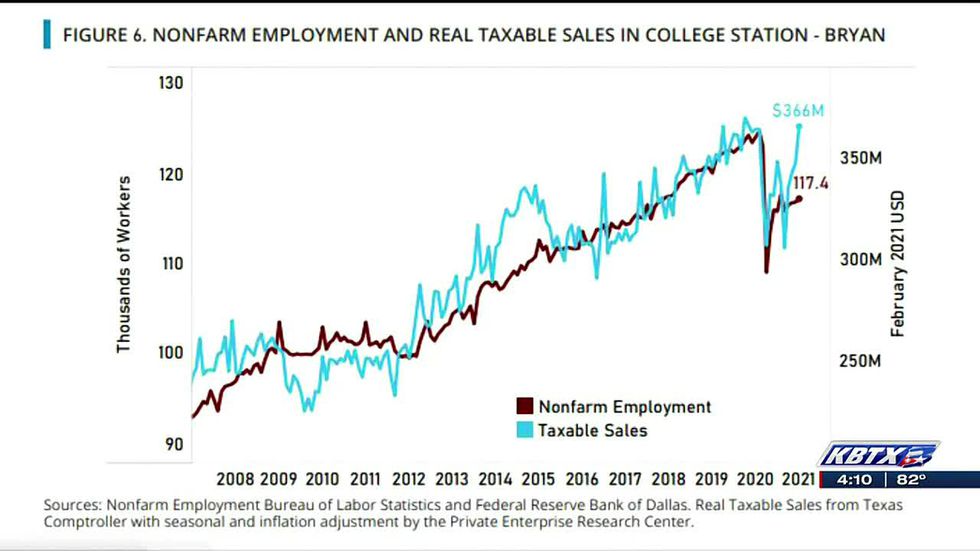 BRYAN, Texas (KBTX) – “I don’t think we’re seeing pre-pandemic spending levels on the leisure and hospitality industry, and certainly not in our local area.”

That’s what the Director of the Texas A&M Private Enterprise Research Center, Dennis Jansen, believes is part of the reason local spending is outpacing employment.

Spending in the Bryan-College Station area has returned to roughly where it was before the pandemic hit last year. However, according to Jansen, total nonfarm employment is about 4 percent lower than it was at the same time last year.

“This could be purchases of quite a number of items including things like home improvement,” Jansen said, “there’s lots of stories that have been out about how homeowners, working from home, or quarantined at home, have spent a lot of money on home improvement activities. So there’s a fair amount of spending that’s, that’s, that’s going on, even though people may or may not be employed. In a typical recession when you’re unemployed, you cut your spending a fair amount. But in this recession, we’ve had a lot of government direct payments to individuals. We’ve had now three rounds of relief payments to individuals and those have been quite substantial and have made and so even the unemployed have been able to maintain spending levels with those additional funds.”

Jansen also pointed to the leisure and hospitality industry as another possible reason for the disconnect between spending and employment.

Jansen said employment in the leisure and hospitality industry is roughly 75 percent what it was before the pandemic. He said right now the industry accounts for roughly 11.5 percent of all employment in our area currently. However, in 2019 the leisure and hospitality industry accounted for more than 14 percent of employment in the Bryan-College Station. Jansen said that while the industry encompasses tourism including out-of-town visitors drawn to the area for things like A&M sports, university events, and other local government-sponsored activities, that’s not the main driver for sales. He says the industry depends on local residents and especially students at Texas A&M.

“Students aren’t purchasing meals, they may or may not be purchasing lodging renting places, and they’re not engaging in other recreational activities,” Jansen said.

He attributed the drop in business caused by students living and studying remotely could account for the continued low employment in the leisure and hospitality industry. Jansen explained that a return to pre-pandemic employment levels in the industry will require an opening up of sporting and other events to full fan participation, a return to largely face-to-face instruction, and the university returning to normal in terms of outside visitors, academic events, and travel. Jansen said from what he has heard from Texas A&M University officials, he believes all of those requirements will be in the works this summer with a target for full implementation by the fall semester.

Yet another possible reason Jansen offered is the drastic effect that oil jobs have on our local and state economy. He said the industry has been buoyed by recent gains and despite the small proportion of workers that are employed in oil-related jobs, the money created by those jobs goes a long way in our economy.

“Employment is about 1.4 percent of nonfarm employment in the mining industry,” Jansen said, “and that’s pretty small, but the industry contributes to GDP more like 5.1 percent so you get a lot more valued output from fewer workers.”

Watch the full interview in the player above.