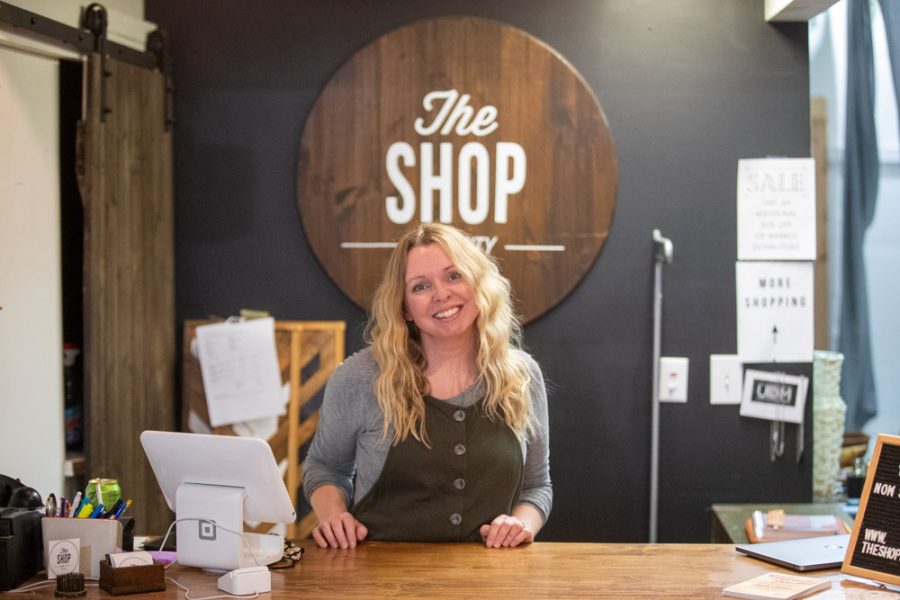 When a pandemic required her shop to shut its doors, Kate Dreyer and her business partners had to find a way to keep the lights on.

Dreyer, along with co-owners Kay Boyer and Jessica Meyer, operates The Shop, a rustic artisanal boutique in downtown Iowa City. The Shop’s cozy retail space features an eclectic collection of vintage and modern decor and clothing, handcrafted furniture, and other accessories all curated or created by the owners.

When retail stores were forced to close by an emergency order from Gov. Kim Reynolds a year ago, The Shop’s owners turned to social media to stay connected with their customers and keep sales flowing.

“When we realized we had to shut our doors we definitely took advantage of social media platforms, and we started posting daily Insta stories of sales,” Dreyer said. “And then every Monday night we hosted a Facebook Live event.”

While The Shop had been hosting online sales and using social media before the pandemic, in both its Iowa City location and a second location in Kalona, those efforts shot up in March 2020 as online sales became The Shop’s main source of revenue.

The Shop’s experience is one shared with countless other businesses across the state and country, that over the past year have faced hardships, difficult bureaucratic hurdles, and have had to adapt to a changing business landscape during an unpredictable pandemic.

While nearly all businesses faced struggles last year, the leisure and hospitality sector — which includes restaurants, theaters, recreation, and hotels — is by far the hardest hit industry a year after the beginning of the pandemic. According to data from Iowa Workforce Development from December, the sector still has a net loss of almost 32,000 jobs compared to February of 2020. At the peak of Iowa’s unemployment, in April of 2020, leisure jobs were cut by more than half, dropping from 146,300 jobs in February to 71,400 jobs in April.

“More than a third of the lost jobs that we’re still enduring in the state are located in leisure and hospitality,” Iowa State University Professor of Economics David Swenson said. “So, there’s no other way to spin it. It’s just bad.”

Local governments — including schools — and health services are other areas that are still enduring significant dips in employment. While most other industries still haven’t recovered from last year, retail and food processing industries have seen an uptick in employment.

Bird said increasing online presence is a common tactic businesses have incorporated to help sales during the pandemic.

“Reaching out to patrons in different ways, getting online, offering delivery of goods and takeout, so all those things and using other methods, getting creative with it, helped sales,” Bird said. “I think it was just a lot of innovation that was happening.”

“Businesses that are still operating took the safety precautions seriously,” Bird said. “So, they found methods for trying to keep people socially distanced and that whole transparency around hygiene — they did a really nice job with that.”

Co-owner of Oasis Falafel Ofer Sivan said this past year has been financially difficult for Oasis, as the business tries to balance making sufficient sales and also prioritizing the community’s health and safety.

Oasis has reduced its operations from 70 hours a week to 21 hours per week, and is down to 20 percent of its original employee base.

“It’s been a challenge to stay afloat, financially, so the government programs have been helpful with payroll and allow us to keep as many employees as we have been able to keep,” Sivan said. “We’re just trying to improvise and find a way to operate safely with an acceptable level of risk that’s acceptable to our staff.”

Sivan said he has received appreciative customers complimenting the business for only offering delivery and take out dining options, acknowledging Oasis’s commitment to prioritizing the public health of its staff and patrons.

With a new contingency plan each week, Sivan said Oasis has been able to persevere through a year of financial uncertainty and a wavering customer and employee base.

Sivan said he is hopeful that the recent rollout of COVID-19 vaccines across the state of Iowa and the rest of the nation will help Oasis return to a more familiar routine of preparing food and serving community members. President Joe Biden announced last week he was directing states to expand vaccine eligibility to everyone over the age of 16 by May 1.

Sivan recognized the city’s efforts to provide financial support to local businesses this past year.

“I mean one thing about the crisis, the city and community are trying to help businesses,” Sivan said. “Those efforts actually do help, you know. So, and there’s a lot of small businesses that have benefited.”

In February, Iowa City awarded more than $360,000 to 27 small businesses, coming from the city’s CARES Act funding. The criteria included whether the business had received previous financial assistance and focused on businesses operated by women and people of color.

Jennifer Banta, the vice president of the Iowa City Area Business Partnership, said navigating federal relief programs was difficult for many businesses early in the pandemic. When the Paycheck Protection Program opened up after the CARES Act, many local businesses did not know the stipulations and rules that came with the loans.

“The plane was being built as it was in the air, so rules were changing,” Banta said. “I think as we’ve gone along now, it has gotten a lot better. People know where to go to get the information.”

An opportunity for some

While the pandemic has put a financial strain on several restaurants, some people have found an opportunity to start up a new business. Bird said there has been a 7 percent increase in new restaurants opening downtown, and some new retailers opened such as the downtown Target.

Pat and Fran’s Irish Pub in Coralville opened in November, and has seen significant support from the surrounding community, co-owner Nick Carroll said. Located at 808 5th St., the bar is in the same location as Tap N’ Tacos, a Mexican restaurant that closed early in the pandemic.

While there’s an Applebee’s and a couple bars in the area, Carroll said the area was missing an “in-between” neighborhood bar with the environment that Pat and Fran’s brings.

“This is a little more low key,” he said. “More warm and inviting, like, ‘We’re going to come to relax, not to have a night out or whatever.’ That’s the vibe we were really going for.”

The bar was inspired by Carroll’s friend and the son of co-owners Bob and Karin Olson, Bo Olson, who died of brain cancer in August. Before his death, Bo left a “bucket list” of things he wanted his family to do, which included opening a bar, Carroll said.

Opening in the middle of the pandemic brought its own stipulations and considerations, Carroll said.

Although restaurants aren’t required to limit capacity since Reynolds lifted all COVID-19 restrictions in February, the bar has only about a dozen tables with 60 seats in total, though it has a capacity of 139.

“Yes, we did open in the middle of a pandemic, which isn’t ideal,” he said. “At the same time, it was eight months into the pandemic so most people do what they were doing already as far as if they’d worked in the service industry.”

For The Shop, the adaptations made because of the pandemic will continue into the future. The Shop saw no financial losses over 2020, and Dreyer credits that to its online presence.

“We’ve decided that the 10 percent growth we experienced was definitely due to what we’re doing online, and we keep doing that,” she said.

Bird said, as the city moves forward, the downtown district would like to continue to implement strategic initiatives that help support with the recovery from COVID-19.

Bird said she hopes to increase the number of patio and outdoor seating options for restaurants and businesses this spring and summer, as this initiative helped attract patrons to the downtown area this past year.

“We want to continue to strengthen the destination of downtown Iowa City and the University of Iowa Pentacrest,” Bird said. “We want to create a stronger destination there for people to come and visit. So, I think those are good discussions that we will continue to have going forward with our city and university.”

As the economy continues to recover, Swenson said the leisure and hospitality industry will likely be the last to catch up. He said Iowa will likely see excess commercial real estate supply through 2021.

“Basically what we want to do is climb back to where we were, which was sort of at a stasis, just kind of holding on,” he said. “And if we can do that in the next nine months to a year, that’s about as good as one could hope for here in Iowa.”