Inductees flew millions of miles before Hall of Fame 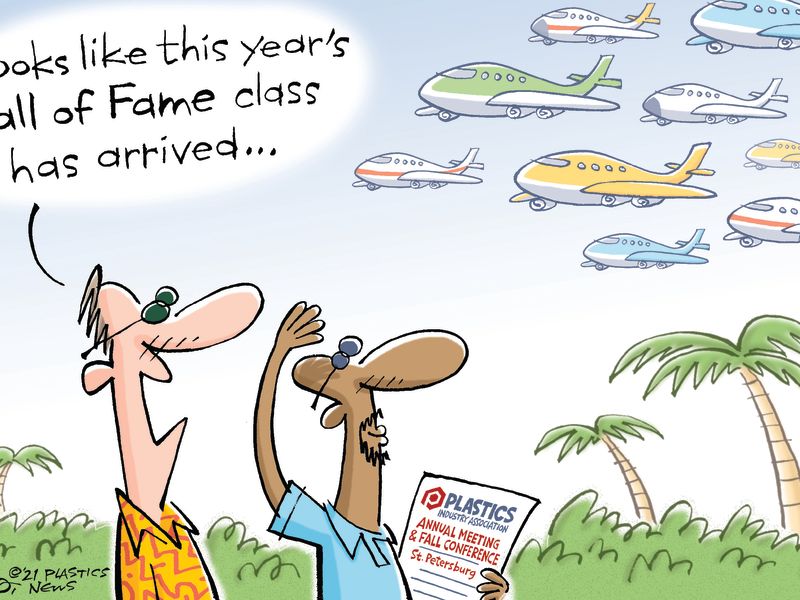 This year’s class of Plastics Hall of Fame inductees have all traveled to dozens of countries and many were still on the move even as they have entered retirement.

They flew for work, trade shows, conferences, speeches and pleasure. That is, until early 2020 when they were put on “house arrest,” as Vince Witherup said during a recent interview with Plastics News.

The coronavirus pandemic grounded or reduced most airline travel, which was one of the reasons the Plastics Academy Hall of Fame ceremony was delayed alongside NPE2021. The ceremony will now take place in St. Petersburg, Fla., on Oct. 7 during the Plastics Industry Association’s annual meeting and fall conference. All inductees intend to make the trip.

Each of the 10 inductees were interviewed by Plastics News for the special issue and are featured with their own story and video.

While each inductee is unique in their plastics knowledge, they all share a common thread: travel. I’ve gathered some tidbits.

For Sal Monte, the stories go on as long as the miles. He traveled to give lectures and enlighten the masses to broaden material use.

“I talked with all my heart and soul to spread my mission to teach people how to use raw materials more efficiently using titanium,” he said.

He said he and his wife, Erika, had visited 52 countries and plan to be on the move again when the world opens back up.

Suresh Shah, who was born in India, spent much of his time traveling in the 1990s for General Motors/Delphi. He said he greatly benefited from working with people across different cultures and comparing them in the U.S., Europe and Africa.

“I really like Europe, Germany in particular, where they take one-and-a-half-hour lunch breaks, you come back more energetic,” he said. “And here we are, we are workaholics, we were so much.”

Peter Neumann, former CEO of Engel Holding GmbH, which is headquartered in Schwertberg, Austria, was inspired to focus on expanding the business to the world market after a trip to Asia in the 1970s. Neumann’s profile was written by my colleague, Plastics News Assistant Managing Editor Steve Toloken.

“As a student, I was traveling a lot,” he said. “I was traveling through Thailand and China, and at that time, it was not so open as it was today. I was so fascinated about the culture, not the historical culture but the business culture and the way people are working and hardworking.”

Neumann has slowed down in recent years but enjoys trips to the Mediterranean Sea to go sailing. He also spends time skiing with his twin 7-year-old grandsons.

German machinery executive Ulrich Reifenhäuser enjoyed building friendships with people he normally wouldn’t contact: “It really enriches my life and gives me new inputs and new ideas on what I can do better in the time to come.”

He particularly liked international sales and the entrepreneurs he would meet and build friendships with around the world as the industry globalized, whether that was Europe, the Americas, Asia or Africa.

Once the world opens back up, Wylie Royce plans to take a more relaxed approach after years of a “tremendous” amount of travel.

“All these years, it was never, or very rarely, was it relaxed,” he said. “When it came to vacation, we never wanted to go anywhere; we wanted to stay home.

“I think I was putting about a quarter-million miles a year on United alone, so the last thing I wanted to do was get on a plane.”

Wylie and his wife, Nancy, hope to find rentals in other countries like France, England or Spain to be able to stay for a few weeks to a month and be more immersed in the culture. After a year of staying in, Royce is itching to get back out there.

“You have no idea how much I look forward to getting on a plane and go see a customer,” he said. “My world was always meeting people and hearing about their needs. That’s always the way we’ve done business, and you can’t do that on a Zoom call.”

In contrast, Yoshiharu Inaba, chairman of the Fanuc Corp., finds the communication shift to be helpful from the Japan headquarters. Inaba used to take 15-16 business trips per year and has reached 1 million miles of travel with Japan Airlines.

“We have had to resort to online information or meetings, and we have been able to produce a good environment to make that communication easier,” he said. “We can talk to each other without visiting the United States.”

Inaba said in the U.S. he enjoys visiting Boston and Fanuc’s research academy in San Francisco. He also lived for a time in Cincinnati and Detroit.

As Yushin Precision Equipment Co. Ltd. grew across the globe under Mayumi Kotani’s watch, she urged her two daughters to study abroad in the U.S. and the United Kingdom.

Don Paulson was always traveling for Paulson Training Programs, but he always made a point to take his kids on vacation.

“We’ve done a lot of sailing, a lot of travel. Nobody travels all over the world, but we’ve covered a good portion of it,” he said.

Paulson recalled visiting the Soviet Union as it was beginning to unravel and befriending a Russian family they later helped get settled once they fled to Poland. They forged a lifelong friendship and have visited the Paulsons several times.

Joe Prischak’s travels to Africa and seeing impoverished, hungry children helped spur his creation of Africa 6000 International, which drills wells for safe, clean water. So far, it has drilled more than 100 wells.

“Your heart has to go out to them,” he said, describing the children in the rough conditions. “It’s very gratifying to know that you saved a life. And to save thousands or millions of lives is a lot better feeling. It’s a great feeling.”

Take a trip through the careers and stories of the 2020 Hall of Fame inductees in this week’s issue.