The industry had been one of the bright spots in the Illinois economy but COVID-19 and state-mandated mitigation efforts have decimated it.

Last year was the worst year for jobs in Illinois’ history and no sector of the economy was hit harder by COVID-19 and state-mandated mitigation measures than the leisure and hospitality industry.

Nationally, and within Illinois, the leisure and hospitality sector grew employment faster than nearly any other. However, the gap between sector employment growth in Illinois and the rest of the nation widened during the past two decades.

Illinois’ leisure and hospitality industry did grow substantially faster than in other Midwestern states, with nearly all of the job gains coming from the Chicago metropolitan area. Those jobs were likely driven by growth in tourism.

This was welcome news because other sectors of Illinois’ economy lagged among Midwestern states, leading to significant underperformance in total job growth during the past two decades. Then, the COVID-19 pandemic and state-mandated lockdowns ravaged the state’s economy.

There may be some hope for Illinois’ immediate recovery of the leisure and hospitality industry, with COVID-19 vaccines being dispersed and indoor dining resuming statewide. Still, Illinois has a painful economic recovery ahead and will need to reform impediments to the economy that were causing jobs to lag the rest of the nation prior to the pandemic.

Unfortunately for already-struggling Illinoisans, rather than pursuing spending reforms, Gov. J.B. Pritzker is continuing to pursue new taxes. While the governor has, at least for the coming year, given up hopes of raising the state’s income tax, he is now promoting closing $932 million in “loopholes” to raise more revenue. The move was decried by the Illinois Chamber of Commerce and Republicans because Pritzker is not closing unfair “loopholes,” but rather trying to take back a deal he made early in his term for key tax incentives and deductions intended to create jobs.

Pritzker recently failed to get the lame duck legislature to cancel a pandemic recovery tax credit for small businesses that would have taken from $500 million to $1 billion more from them as they struggle. Pritzker has vowed to pursue the money again in March with the new legislature.

Contrary to the governor’s wishes, it is imperative lawmakers work to avoid the harm to businesses and jobs that tax hikes would create. Economists argue against raising taxes during a recession.

Instead, Illinois can improve its finances and continue to provide core services mainly by implementing constitutional pension reform. The Illinois Policy Institute is offering that along with other fiscal fixes that can offer overburdened Illinois taxpayers a path to declining debt, lower taxes and more effective state government.

Illinois needs its labor markets to improve so they can create more jobs, not to pass more taxes that cost the state more jobs.

The Employment Situation in January

Sat Feb 20 , 2021
By Jared Bernstein and Heather Boushey This morning’s jobs report reveals that the pace of job gains has slowed sharply in recent months as the pandemic continues to weigh on job creation, especially in face-to-face services. Strong relief is urgently and quickly needed to control the virus, get vaccine shots […] 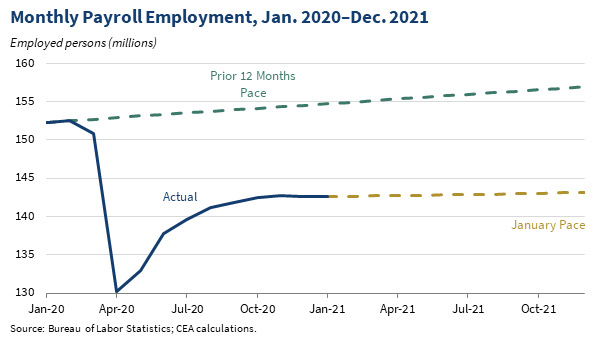