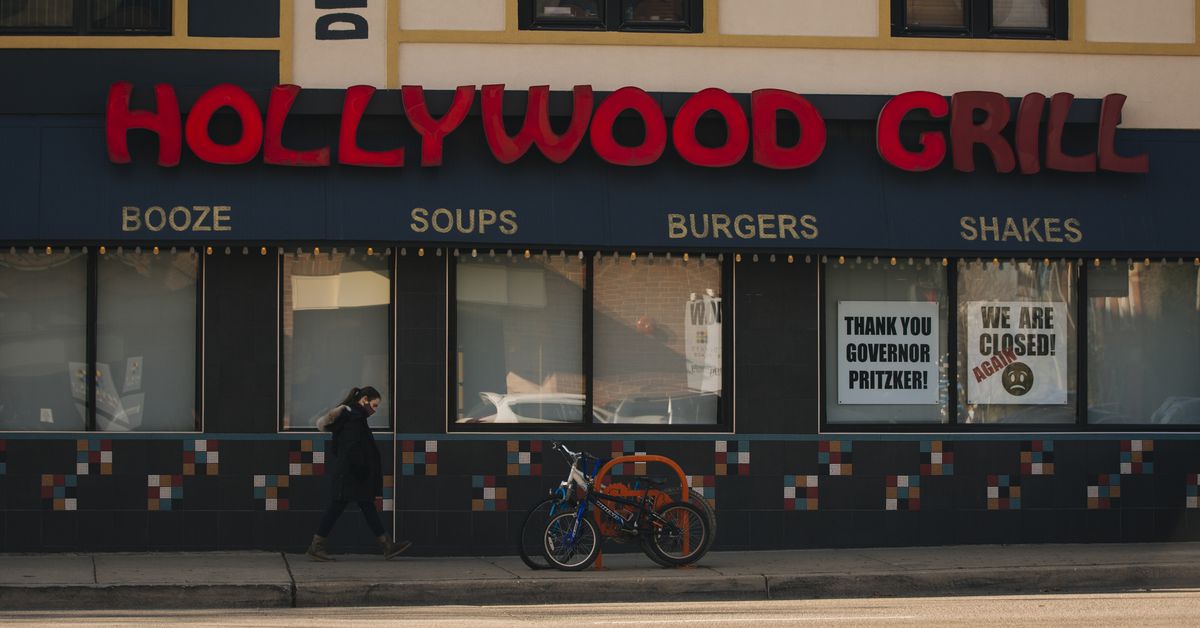 Today is the one-year anniversary of when the state halted on-premise service at restaurants and bars to combat the rising spread of COVID-19. A long-awaited job report released last week by the state shows the devastating economic toll the pandemic has wreaked. Illinois’ leisure and hospitality sector (which includes restaurants, bars, hotels, and music venues) lost 216,500 jobs over the past year, according to the Illinois Department of Employment Security.

In January 2020, the hospitality sector had added 3,400 jobs versus the previous year, according to a report released in March 2020. The unemployment rate in Illinois was 3.5 percent in January 2020. That rate is 7.7 percent presently, but it’s trending downward after spiking from 6.9 percent in November to 7.6 percent in December. That coincides with the October 29 halt of indoor dining and winter’s arrival, as the season is typically a slow time for the hospitality sector.

The state’s bars and restaurants are showing signs of life by adding 5,100 jobs in January, as indoor dining returned. Over the past three months, 16,400 hospitality positions have been eliminated. The leisure and hospitality sector’s growth is second only to that of Professional and Business Services, which increased by 11,500 that month.

Gov. J.B. Pritzker announced in late January that restaurants in Chicago and the surrounding suburbs could reopen for limited indoor dining. The move that could spur an increase in the state’s employment numbers as operators begin to expand their skeleton crews. Restaurant owners are also waiting for their share of the $2.8 billion allotted to the industry by President Biden’s federal COVID-19 relief package.

— Workers at Colectivo Coffee Roasters in Chicago, Milwaukee, and Madison, Wisconsin will vote this month on whether or not to form a union, according to a news release. Cafe workers have been pursuing organization efforts since last spring. If they vote to unionize, reps say it would be the largest cafe to ever organize, representing baristas, bakery staff, delivery drivers, and warehouse roasters at 16 stores.

— Local Girl Scouts are having a tough time selling their famous cookies due to the pandemic, so popular Chicago mini-chain Black Dog Gelato has stepped up to help. Black Dog’s March Cookie Madness Bracket Contest features eight Girl Scout cookie-inspired flavors using recipes submitted by troops. The top performer will be crowned the winner on March 29, and a percentage of sales will also go back to troops who created winning recipes. Bracket flavors will only be available from 2 p.m. to 6 pm. Saturday and Sunday at shops in West Loop, Logan Square, and Ukrainian Village.

— Chicago Cut Steakhouse, the pricey restaurant along the Chicago River with a celeb-focused customer base, brought out an unusual spokesperson to announce its April 1 reopening. Former ABC 7 Chicago sportscaster Mark Giangreco recorded a video announcement on Twitter. The 67-year-old Giangreco, a fixture on NBC 5 Chicago and ABC 7, hadn’t been on the air since January. He mysteriously has been kept off TV as he negotiated his departure. He joins food personality Steve Dolinsky as another high-profile exit from the station. Giangreco’s exit was allegedly paved after teasing a coworker on-air, supposedly part of mounting tension between former colleague Cheryl Burton. Chicago Cut, which opened in 2010, is bringing out the big guns to stay relevant in this tough time for the industry.

Since 1982, we have learned who the #1 sports anchor was going to be in Chicago!!! Congratulations to the GOAT, @MarkGiangreco7, on an amazing career!!! Can’t wait to see you at the world famous Giangreco table all the time!!!! pic.twitter.com/L2qbOGkKyB