Two months after accepting an offer of appointment, Jewel Maigue has started a new chapter in her life at the U.S. Naval Academy in Annapolis, Maryland.

“I’m feeling both anxious and excited,” she said the day before her official entrance into the academy. “I know it’s natural to be nervous about going into something new, especially when you know you’re going to be completing something that will test you physically, mentally, and morally … but I also know that I’m not alone in feeling this way,” she said.

Excitement was what Lt. Cmdr. Matthew Evans also felt when he received his offer of appointment from the academy. He remembers that he was with his family when they checked their mailbox. In the box was a big manila envelope. “I was speechless,” he said when he saw that it was indeed an offer of appointment.

‘It’s not in me to quit anything’

Evans graduated from the academy in 2010. He spent the last three years of high school on Guam and graduated from Guam High School in 2006. He currently serves as the operations officer at Commander Submarine Squadron Fifteen in Guam.

He says when he first told his parents about his decision to work towards getting into the USNA, his mother was shocked because she knew how challenging it would be to get accepted, a fact that he didn’t know at the time.

This fact, however, didn’t deter him. “It’s not in me to quit anything and I knew I wouldn’t accept a rejection letter if I knew I honestly had not given it my all,” he said. “I knew that getting in was competitive, which was the main driving factor for me. I knew that there were 20,000 other kids just like me fighting for less than 2,000 spots.”

Maigue, who left island for the academy in June, says that she also didn’t let herself get caught up in anxiety, thinking of whether or not she would get in. She told herself instead that she would always end up on the path that she was meant to travel on.

For those who aspire to attend the Naval Academy, the level of competition and high standards when it comes to getting considered for admission is a reality that shouldn’t be taken lightly. Preparation for applying to the academy begins as early as freshman year of high school.

Evans said in high school, he maintained high grades, excelled in sports, even trying out for sports he didn’t even like, joined clubs, and volunteered for community service. “(I) worked to make money and start developing my credit,” he added.

More:‘Everywhere I go, I bring the island with me’

A strong support system is also what kept Evans motivated throughout the preparation and application process. He credits his mother for helping him with the application process and his wife, Krystle Lynn DeVera Evans, who he married in 2012 in the same church in Agat that her parents were married in, for encouraging him to continue pursuing his dream while he was still in the academy.

Maigue credits her ability to believe in herself for getting her this far. “Because the Naval Academy’s application process had such a competitive nature that I’ve never experienced before, believing in myself was by far the best thing I could do for myself,” she said. “It can be easy to get caught up in the chaos of it all or to feel unfulfilled because of the competition itself. Knowing this, I made it a priority to find satisfaction in my years worth of effort leading up to this point in my life.”

She added that she knows she is capable enough in herself to find satisfaction in knowing that she will continue to push herself to succeed, regardless of what the end result may look like.

Evans also believes that no one else is going to care more about you and your goals more than yourself. “What I mean by that is to not leave anything up to chance and to do everything in your power to accomplish your goals,” he said.

Trusting in yourself and your own capabilities will make you fall in love with progress, Maigue said. “Believe in yourself. Don’t be swayed by statistics or accolades.”

For Maigue, getting into the academy means much more than prestige and recognition. “To represent Guam amongst such a large population of people that come from every corner of the world, I feel both extremely privileged and honored,” she said. “I am and always will be a daughter of Guam, and I’m beyond excited to represent that in every opportunity the Naval Academy gives me.”

Reporter Christina Lee covers military, land issues and more. You can reach her at [email protected]

Tue Jul 6 , 2021
Germany is easing strict restrictions on travel from Britain, Portugal and some other countries that were imposed because of the rise of the more contagious delta variant of the coronavirus ByThe Associated Press July 5, 2021, 8:15 PM • 2 min read Share to FacebookShare to TwitterEmail this article BERLIN […] 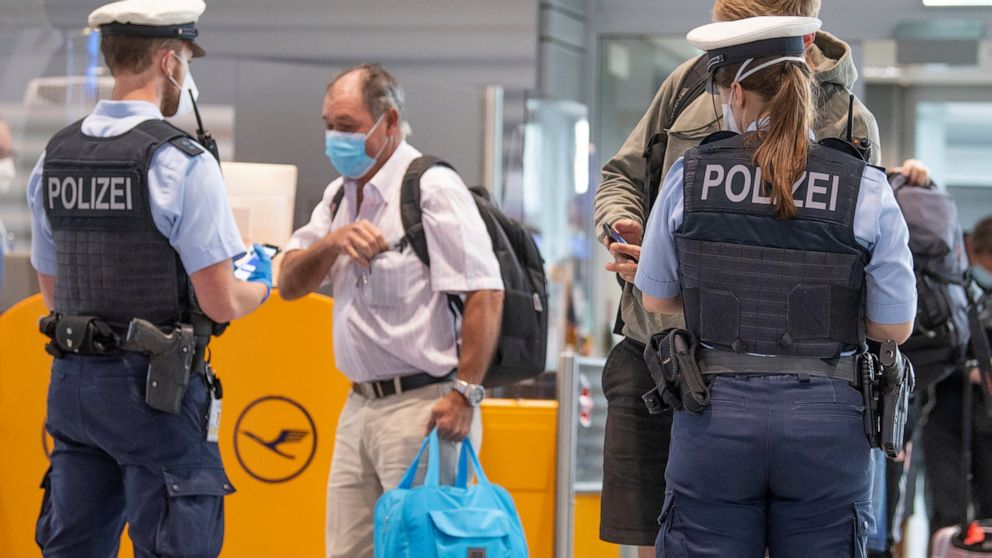