BOSTON — By 2030, Massachusetts could need up to 200,000 more housing units and a “large influx” of child care workers, office real estate demand could fall by as much as 20 percent, and hundreds of thousands of people could need to transition into new jobs or occupational categories, according to a new state report.

About a year after the COVID-19 pandemic forced a shift in the way people think about work as many jobs became remote and others adapted to new limitations, the Baker administration in March awarded McKinsey & Co. a nearly $1.6 million contract to study the “future of work” in the Bay State.

The 82-page report, released Tuesday, found that changing ways of working could move the “center of gravity” in Massachusetts away from its urban core, and high costs of living and doing business here create a risk of future job growth moving out-of-state.

Discussing the findings during a press conference at BioLabs’ Tufts Launchpad location in Boston, Gov. Charlie Baker said the analysis “gives us a roadmap for how we can take tangible steps to make sure that Massachusetts can continue to grow and thrive in a post-pandemic world.”

He used the report to once again pitch his plan for spending $2.9 billion federal funds, including $1 billion towards housing and $240 million for workforce training. Baker has been pushing to quickly invest more than half of the state’s American Rescue Plan Act allocation, but lawmakers are taking a slower approach.

House Speaker Ronald Mariano said last week that he expects those hearings on ARPA spending priorities, run by the Joint Ways and Means Committee, to start this month.

“The plan addresses many of the key needs that were presented in the report,” Baker said. “It focuses on building up the commonwealth’s housing stock, on supporting its workforce, on dealing with some of the dislocation that will take place in downtown economies, and continuing to address a variety of key infrastructures. These are urgent priorities, which are only underscored by the findings in this report.”

The report features a series of “core insights,” including a possible drop in demand for office real estate, a need for child care business models to evolve to provide flexible options, a decline in commuter rail and other public-transit ridership, reduced levels of business travel and corresponding impacts on the hospitality and airline industries, and the need for reskilling of workers at “an unprecedented scale and pace.”

It says the state’s population is likely to grow, though more slowly than pre-pandemic levels, that existing equity challenges will intensify, and that “housing options that work for all will be key to retaining and attracting people into the state.”

Baker and Labor and Workforce Development Secretary Rosalin Acosta each pointed to the report’s estimate that 300,000 to 400,000 workers could need to transition to different occupations or occupational categories over the next decade if the pandemic-accelerated trends around automation, e-commerce and digitization continue.

“This isn’t some distant, academic question that will need to be solved by future generations,” Acosta said. “By 2025 to 2030, the ability to successfully reskill approximately 30,000 to 40,000 people per year could lead to a vibrant commonwealth in which new opportunities outpace workforce growth.”

She said the state needs to “seize the moment and get to work on these reemployment efforts immediately” and said that one of her top takeaways from the report is “the need to act quickly and take full advantage of this moment.”

She said the proposal also calls for $35 million for English-language acquisition integrated with job training and academic skill-building for individuals who do not have a high school diploma.

The report considers implications across regions, finding that Greater Boston suburbs “may be the natural beneficiaries of future of work trends, with potential for increased vibrancy as remote-eligible workers spend more time closer to home.” Meanwhile, it said urban residential areas within about 15 miles of Boston, with lower average wages, higher proportions of immigrant and minority communities, and more residents employed in vulnerable sectors like hospitality, retail and food service “may face the most challenges post-pandemic.”

Rural areas will likely experience the lowest employment growth, while areas with tourism-based economies like Cape Cod and the Berkshires could see more population growth as remote and hybrid work options increase, according to the report. The report flagged rural areas and gateway cities as areas where “reskilling” could be crucial.

Tue Jul 13 , 2021
CHICAGO (WLS) — After several weeks with no states on its travel advisory, the Chicago Department of Public Health announced Missouri and Arkansas are being added back on the list. The city’s emergency COVID-19 travel order was changed to an advisory on June 29. The change was a result of […] 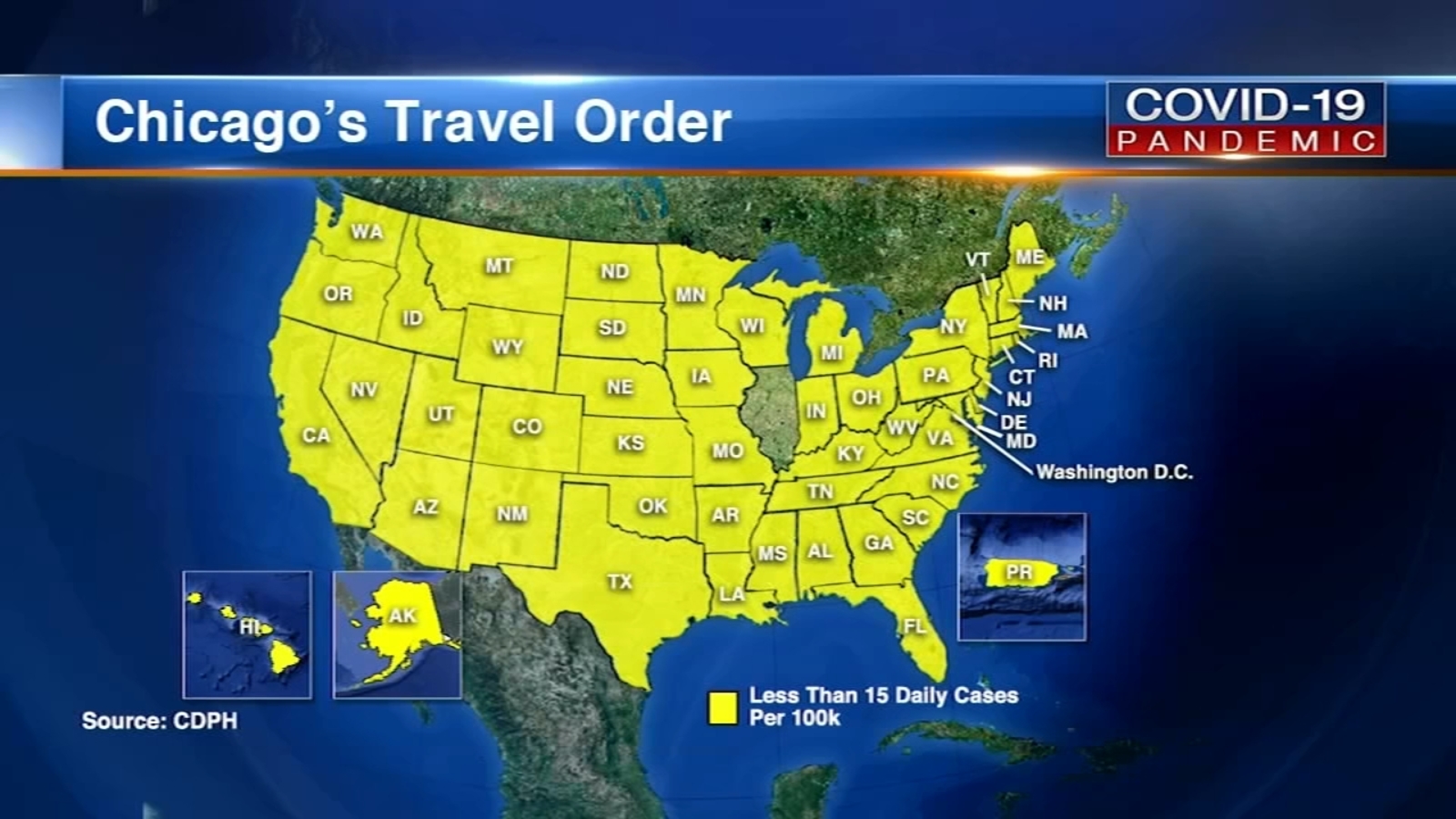