In the last month, as the pace of vaccinations has ramped up, the market has moved toward a “goldilocks economy,” Zonda chief economist Ali Wolf says in this month’s COVID-19 Update webinar. The bottom half of the K in the “K-shaped” recovery is starting to see some growth; the economy added 916,000 jobs in March, almost double the amount added in February, led by roughly 280,000 jobs in the leisure and hospitality sector. The construction sector added 110,000 of these jobs, almost 37,000 of which were in residential construction.

“We’re expecting a lot of economic growth in the next handful of months,” Wolf says. “We think the April and May jobs reports may come out to the tune of millions more jobs being added.”

Despite this growth, and the promise of more to come, lingering economic pain persists. The number of unemployed persons remains 8.5 million higher than it was before the pandemic, and 43% percent of those unemployed have been so for 27 weeks or longer. Leisure and hospitality is still down by 3.1 million positions, and 200,000 more businesses closed than usual last year.

Job postings on Indeed.com are up 22.4% over February 2020, with gains across nearly all major metros. Riverside/San Bernardino, California—the Inland Empire—has far and away seen the largest share of job growth over this period at over 45%. San Jose, California; San Francisco; and Washington, D.C., are the only major metros with a drop in job postings over this period.

According to Kastle Systems, the 10-city average office occupancy rate stands at 26.1%—up from 24.8% just one month ago. Dallas and Houston have the highest share of open offices, while New York and San Francisco have the lowest.

The Latest on Home Sales

While commercial real estate’s struggles do pose a broader economic risk, Wolf notes that residential real estate has stood as a “beneficiary,” as workers no longer tethered to an office location look for homes farther out.

New-home sales are up 50% YOY, according to Zonda’s New Home Pending Sales Index—although Wolf notes that April’s comps are against the housing crash near the start of the pandemic. With 2019 as a pre-pandemic comparison point, new-home sales have risen 48% over the past two years, with strong home sale growth across most major markets, including 120% growth in Jacksonville, Florida.

Builders are noting that “buyer quality” is strong, with high credit scores and qualifications. Average FICO scores have risen since early 2020 for both first-time and repeat home buyers, and debt-to-income ratios remain healthy for both groups. At the same time, the number of prospective buyers has risen significantly from February to March, with a growing share of consumers planning to buy either a new or a resale home.

While households from expensive gateway cities were already migrating to lower-cost markets before the pandemic, the advent of remote work has only accelerated an existing trend. Austin, Texas; Phoenix; Las Vegas; Raleigh, North Carolina; and Jacksonville are among the top destinations for buyers migrating from San Francisco, Los Angeles, New York, and Washington, D.C.

Given the difference in home values from high- to low-cost markets, Redfin and Zonda data show that homes in many markets are selling far above their list prices, led by San Jose where 73% of homes sold above asking in March. Salt Lake City; Denver; Austin; Columbus, Ohio; Raleigh; and Phoenix are among the markets where 50% or more of homes sold above list prices in March.

Wolf reports that some homes have sold at hundreds of thousands over asking, simply because there is little sticker shock for buyers from more expensive markets. In Las Vegas, for example, 73% of San Francisco’s households could afford a median-priced home. This creates a difficult situation for local buyers, Wolf says, who may not have the same purchasing power.

Given Zonda’s rate forecast—3.3% for this year and 3.7% for next, with 10.4% home price appreciation this year and 5.1% next year—Wolf anticipates a 26% increase in the average monthly home payment from 2020 to 2022. In Wolf’s view, given the circumstances, “eventually something will have to give”—though not necessarily in the form of a crash.

Based on Zonda’s monthly surveys of builders, demand for new homes remains high, though some buyers are beginning to hesitate as prices rise, according to Zonda senior managing principal Tim Sullivan. At the same time, rising construction costs have created the impression that the current rate of growth is unsustainable—from “stupid” land prices, as builders have phrased it, to commodity delays and still-skyrocketing lumber prices.

“Lumber is really the biggest challenge builders are facing,” Sullivan says. “Ultimately, we see a slowdown that is price-driven. But right now, we’re dealing with a pretty decent market.”

Of the survey respondents, 22% reported slightly or significantly increased contract sales. Forty-six percent reported no change, and 31% reported a decrease. In some ways, a slowdown in contract sales is by design, as builders are limiting contract sales in order to keep pace with production.

New-home supply remains a challenge, as home builders struggle to build enough product to fit demand. The national project count is down 20% YOY, from over 14,000 pre-pandemic to under 11,000 today. At the same time, 64% of builders expect to increase their project counts from 2019 to 2022; however, 34% said they expect their worst supply constraints in the second half of this year.

Sat May 1 , 2021
SAVANNAH, Ga. (WSAV) – In a win or go home scenario, Leiden Van Abshoven came up with a walk-off bunt single in extra frames to push Savannah Country Day past Eagle’s Landing Christian Academy 9-8 and into the second round of the GHSA A-Private baseball playoffs. Leiden Van Abshoven’s bunt […] 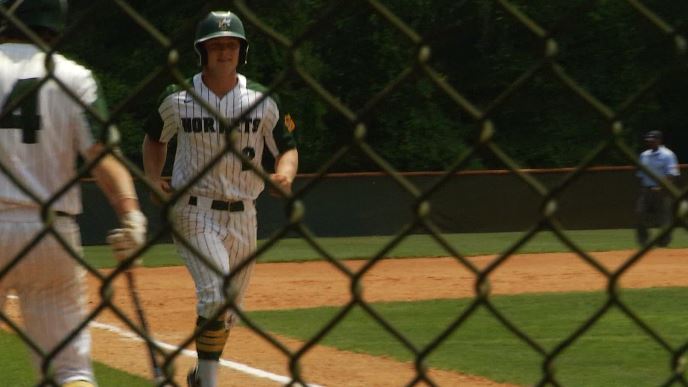