SAN JUAN, Puerto Rico — The Caribbean is hunting for visitors and vaccines to jump-start the stalled economy in one of the world’s most tourism-dependent regions.

Clear waters and warm sand attracted a record 31.5 million tourists to the Caribbean in 2019, but visits plummeted by an estimated 60% to 80% as the pandemic hit last year. That’s devastating for a region whose countries depend heavily on visitors for income.

“Many countries prefer hurricanes compared to what has happened with the pandemic,” said Vincent Vanderpool-Wallace, a former Bahamian tourism minister who also led the Caribbean Tourism Organization.

Tens of thousands of tourism-related jobs were lost, including those held by Nadia Kidd and her mother in Jamaica. Kidd, 31, was a waitress at a resort and her mother worked at a guest house. Kidd, like many other workers, has yet to receive her severance pay and now runs a tiny grocery store out of her home to support her mother and daughter.

“Everything is all on me,” said Kidd, who worked at the Meliá Braco Village resort in Trelawny. “I have loans to pay, light bill and internet (that I) have to pay because my daughter has to go to school online.”

Desperate to create safe conditions for tourism, the Caribbean is turning to India and China for vaccines at a time when global supplies are strained and richer nations are ahead of them in line for shots from other sources. A few have been fortunate to get quick shipments, while others could wait weeks, if not months.

The Employment Situation in February

Sat Mar 6 , 2021
By Cecilia Rouse, Chair of the Council of Economic Advisers This morning’s jobs report shows an acceleration in job growth in February and an upward revision to January’s job growth. However, the economy remains down 9.5 million jobs from February 2020 and will require more than two years of job […] 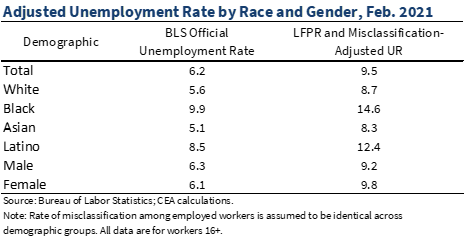