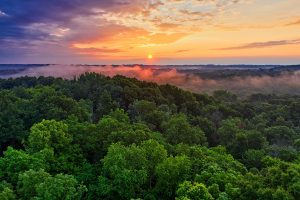 Here are ten facts you should know about this enchanting island which is home to mysterious ancient tribes and sprawling wild forests.

1. A Group of Countries

Malaysia, Brunei and Indonesia are the three countries that make up Borneo. The states of Sabah to the east and Sarawak to the west make up the Malaysian portion of the island. Between Sarawak, which is on the coast, and Sabah is the Brunei part. Lastly, the section that is covered by Indonesia is referred to as Kalimantan.

In terms of size, the United Kingdom is only one third the size of Borneo. However, it is smaller than New Guinea and Greenland.

3. The Oldest Rainforest in the World is in Borneo

In comparison to South America’s Amazon rainforest, Borneo’s rainforest is twice as old; with its age estimated to be 130 million years.

4. Orang-utans Can Only Be Seen in the Wild in Borneo and Indonesia

In Borneo and Indonesia’s Sumatra, orang-utans are prevalent. They can only be seen in their natural habitat in these two places.

5. Borneo is Home to More Than 100 Unique Animal Species

It is astonishing to note that there are more than 100 animal species that can only be found in Borneo. Bornean rhinos, clouded leopards and Proboscis monkeys are some of the notable examples here. It is a great time to check out the island’s wildlife since more species are being discovered with each passing day as research by biologists continues in this part of the world. Click here for wildlife holiday ideas in Borneo.

6. Some of the Biggest Caves in the World are Located in Borneo

With enough space to accommodate up to forty Boeing 757 planes within it, Gunung Mulu National Park’s Sarawak Chamber is the largest cave chamber in the world. The largest cave passage in the world is the Deer Cave with its characteristic Abraham Lincoln profile. The colossal nature of caves such as Gomantong can also not be ignored.

Each with its own unique traditions and cultures, Borneo has hundreds of ethnic groups. The hill and river based communities of the Dayak tribe inhabit most parts of the island. To experience their way of life first-hand, you can live in a traditional longhouse with them.

9. Some of the Most Easy to Access Remote Adventures in the World are in Borneo

With direct routes to Penang, Singapore, Kualar Lumpur, Hong Kong and Bali, Sabah (Kota Kinabalu) and Sarawak (Kuching) are gateway cities. In no time, you can find yourself in mangroves and under canopies from cities and metropolis. Not only that, but you can also explore the Kinabatangan River.

10. The Biggest Flower in the World is From Borneo

A parasitic plant with a flower that produces an awful odour referred to as the Rafflesia calls the Borneo rainforests home. It is nicknamed the corpse flower due to its smell! While the plant is not carnivorous, it uses the smell to attract insects, which play a key role in its reproduction by facilitating pollination.