READING — The Bronson Vikings dropped a heartbreaker to the Reading Rangers Friday night, falling by the score of 54-53.

Bronson raced out of the gate with a huge first quarter, out scoring Reading 17-3 through one to put the Rangers firmly on their heels.

Reading came back with a strong second quarter, outscoring Bronson 21-9 to close to within just two at 26-24 heading into the half.

Two Vikings recorded double-doubles in the contest, starting off with senior guard Mason Harris who had 12 points and 11 rebounds.

With the loss Bronson falls to 7-7 overall on the season and 5-6 in the Big 8 conference. The Vikings will next see action Monday when they travel to Union City for a big rivalry match up.

HILLSDALE — The Quincy Orioles were left scrambling Friday night looking for a varsity boys basketball game after Big 8 foe Springport was forced to cancel due to Covid-19 concerns. The Orioles found a willing partner in the Hillsdale Academy Colts who were also looking for a game after the Tekonsha Indians were forced to cancel their scheduled SCAA game Friday night due to Covid concerns.

Quincy was willing to take on the game and traveled to the home of the 10-1 Colts for non-conference play.

Hillsdale Academy jumped out to an early lead, holding a 17-6 advantage after one quarter, and never looked back.

The big and athletic Colts extended their lead to 31-16 by the half as the teams went to the locker rooms looking for adjustments.

Quincy came out with more energy and passion in the second half but were still outscored by Hillsdale Academy throughout the third and fourth quarters to the tune of 32-24, finding the final score of 63-40 in favor of Hillsdale Academy.

Quincy was led on the night by Kyler Economou who had 24 points, the lone Oriole in double figures.

Also adding to the Quincy effort was Sam Swayer with seven points; Kyle Rodesiler with six points; AJ Henderson with two points; and Riley Miner with one point.

Quincy falls to 5-8 overall with the loss and will travel to Homer on Monday for another key Big 8 battle.

Sat Mar 13 , 2021
The Mynderse Academy boys basketball team had a difficult road to Friday night’s Section V Class B2 title game at Northstar-Christian High School. As the 6th seed coming out of the Finger Lakes East they would first travel over 2 hours to face #3 seed Wellsville. After dispatching with the […] 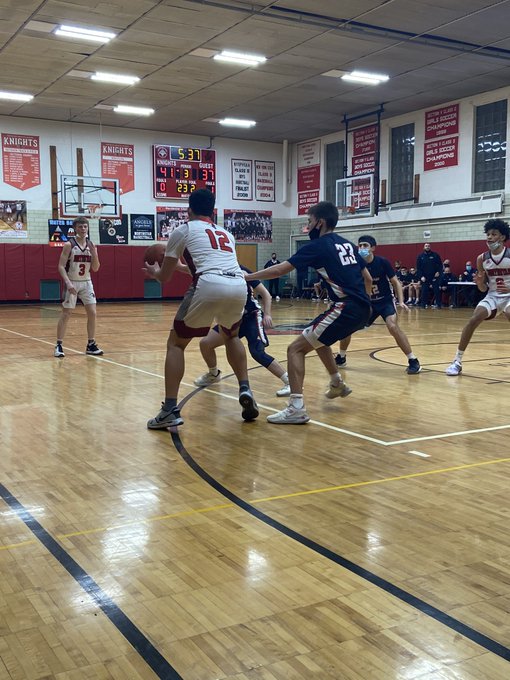