Jim Pappas is pulling extra duty as general manager at the Hampton Inn in Daphne by helping clean up the hotel rooms and make sure a hot breakfast is served to visitors.

He’s also monitoring the phones, waiting for job applicants to call him back. Staffed typically with 35 workers, the hotel off Interstate 10 next to the city’s popular Gator Boardwalk, needs about seven more full-time workers to help manage a forthcoming busy summer season.

“We’re struggling to find labor,” said Pappas. “We have multiple positions advertised online. You barely get on application per month. And when we call them, they may not call back.”

In Guntersville, it’s a similar situation for Tracy Thrower-Mills, general manager of that city’s Hampton Inn. The hotel is sold out most days, and Thrower-Mills needs about a half dozen more employees to keep up.

“I’ve been in the hotel industry for 32 years and I have not seen anything like this,” she said.

Hotels are seeing an uptick in business in recent months as consumers regain confidence following months of widespread pandemic-related shutdowns. As the travelers return, the demand for workers is increasing and hotels are scrambling to fill the openings.

Some hotel managers fear the labor shortage that might not loosen its grip until after the busy summer travel season ends. Hotels in cities like Birmingham have a lot of jobs to add back into the market after shedding 42% of its total hotel employment between 2019 and 2020.

Nationwide, hotels were a rare bright spot for hiring in the U.S. The hotel industry added 54,000 jobs, the largest monthly gain since last September. The U.S. overall added 266,000 jobs last month, which was well below expectations.

But the new hiring isn’t keeping up with demand, and the hotel industry projects employment to be down nationwide more than 478,000 jobs at the end of the year from pre-pandemic levels.

In Alabama, projections from the American Hotel & Lodging Association show the job losses at 2,249 by year’s end.

Alabama hotel employment was at 21,243 before the pandemic began, and is projected to be at 18,994, or down 10.6% by the end of 2021. Alabama’s projected decline is expected to be least impactful among states in the South. The percentage declined in hotel employees isn’t as bad in Alabama as it is with nearby states. Projections are much worse in Louisiana, Florida, Tennessee, Georgia, Arkansas, and Mississippi.

Only Idaho and Utah are projected to have less devastating drop offs than Alabama, according to the industry’s projections.

“Since the state of Alabama is not one of the leading business travel destinations, I do not anticipate that drastic of a loss but there will be a loss,” said Kimberly Severt, director of the hospitality management program at the University of Alabama.

“I think there could be a correlation between the number of people who are not vaccinated in the state of Alabama and people feeling uncomfortable traveling to Alabama,” said Gendler. “Needless to say, but when people don’t travel, it hurts the hospitality industry.”

Alabama industry leaders have their own concerns about the hiring crisis that looms over an expected rebound in traveling.

“We are facing a new kind of pandemic,” said Robyn Bridges, vice-president with Auburn-Opelika Tourism. “Workforce in our community, and specifically in the hospitality industry, has reached a crisis point. We have hoteliers and restaurants operators who are desperate for employees and, now that business levels are returning to normal, are being forced to reduce their operating hours – in the case of restaurants – or reduce the number of rooms they offer because there is no housekeeping staff to clean them.”

The reasons for the hotel labor shortage are varied. Some blame low wages for the lack of new hires, while others say that concerns exist over contracting the coronavirus.

Starting pay at some hotels, in some cases, is slightly above the federal minimum wage of $7.25 an hour. A new guest services representative job posting at the Hampton Inn in Guntersville advertises a pay range between $9 to $12 an hour. The Hampton Inn in Fairhope is paying housekeepers $11.50 an hour.

In Huntsville, a line cook at the Embassy Suites by Hilton pays $12.50 an hour, according to a job advertisement on Indeed.com.

Sandi Snead, general manager at the hotel said that wages are becoming more competitive in Huntsville where population and job growth is occurring.

“It’s a very competitive market with the types of companies moving in,” said Snead. “We have our engineering and space contractors and all of these things driving competitive wages in general. That said, (our industry) has to be competitive. The number of people moving into this market creates a competitive opportunity.”

Some hotels are boosting pay for workers by offering bonuses for helping in the recruitment process.

At the Battle House Hotel in Mobile, a potential $400 bonus can be earned for an employee who refers a potential worker to the hotel’s management.

“We’ve done (the bonus) in the past but we’ve just doubled our efforts and the payouts back in January when we saw a shortage of team members,” said Margo Gilbert, general manager of the downtown Mobile hotel.

Other industry officials believe a rise in federal unemployment benefits is also to blame.

In some states, where Republicans are in control, a push is on to roll back some of the federal help. Alabama became the latest state on Monday to cancel the $300 federal bonus that was added to the state’s maximum weekly unemployment benefit of $275. The Alabama Department of Labor is also reinstating a work search requirement for all unemployed claimants that requires them to be actively searching for work to be eligible for unemployment benefits.

President Joe Biden, whose economic relief package in February has been blamed by GOP critics for the labor shortage, says there is no evidence to blame the added $300 benefit as the main contributor to the anemic job market.

Research is lacking, but some academics question whether the jobless benefits affect hiring. One academic research paper found that for every 10% increase in unemployment benefits, job applications declined by 3.6%. Yale economists last summer said there was no evidence between employment levels and the $600 in enhanced benefits provided in the Coronavirus Aid, Relief, and Economic Security (CARES) Act.

Clark, in Mobile, blames the $300 in federal assistance is encouraging workers to stay home instead of finding a job.

Don Staley, president/CEO with Tuscaloosa Tourism and Sports said the current situation has multiple elements to it. He said the additional unemployment benefits are contributing to the hiring problems, but he also believes the industry’s hiring struggles are also related to continued fear about the coronavirus.

Around the state, efforts are underway to add more workers.

Tuscaloosa hotels have their busiest season during the fall when the University of Alabama hosts home football games. Staley said he hopes that hotels can recruit and train the support staff this summer before the fall ramp up. He said job fairs hosted by the West Alabama Chamber of Commerce and increases awareness from the University of Alabama and Stillman College & Shelton State Community College hospitality programs will help in luring more youths into hospitality industry jobs.

In Opelika, a hospitality job fair is occurring on May 25 at Southern Union State Community College and Bridges, with Auburn-Opelika Tourism, is hoping people show up.

“We don’t expect it to be a panacea, as we’ve heard the horror stories nationwide, but we have to do everything we can,” she said.

John Oros, president & CEO with the Greater Birmingham Convention & Visitors Bureau, said he believes there will be an upward trend in hiring if people continue to feel safe about traveling.

“Many hotels and restaurants can’t find enough employees due to the sudden surge in leisure travel,” said Oros.

He said the Birmingham region is seeing “significant increases” in group travel inquiries and anticipates a rebound in corporate and convention-related travel coming soon.

“It’s anticipated travel demand will improve and get back to 2019 levels by mid-2023,” Oros said. “But we believe the recent surge in travel will accelerate during the second half of (the year) because of the traveling public’s confidence and comfort level to travel.”

But when will the workers come back?

Clark, with Visit Mobile, believes the industry needs to do more to advertise the potential for higher wages and earnings beyond the lower wages for entry-level work. He said the potential exists for people to earn six-figure incomes in the hospitality sector, including hotel management, without requiring a master’s degree.

The median hourly salary for a hotel manager in Alabama is above $60,000 a year, according the Bureau of Labor Statistics. A food service manager earns slightly more than $59,000 annually.

Clark said Visit Mobile is partnering with local schools to develop a Jobs app for cell phones to target youths in Mobile County and connect them with potential employers, particularly those in the hotel industry.

“I’ve been in the hospitality industry for 35 years and I strongly believe that if anyone comes in and works hard, teams well with others, that they can really grow a tremendous career in what we do,” Clark said. “I work with food and beverage managers who make tremendous incomes. General managers of hotels start with housekeeping jobs and work their way up (the career ladder) over time and end up with tremendous jobs. It’s out there.”

Lynne Chronister, vice-president of research and economic development at the University of South Alabama, said the lack of potential employees in the hospitality sector existed before the pandemic began, but that it wasn’t “as dire of a situation as we are now in.”

Chronister, who is also interim director of USA’s Hospitality and Workforce Innovation Alliance, said part of the problem is the negative perceptions about working in the industry among high school and college graduates.

The Job Market Is Starting to Send Mixed Signals. Watch the Manufacturing Sector

Wed May 12 , 2021
Joe Raedle/Getty Images Text size Businesses and school districts say they want to hire. So why aren’t they? It’s an important puzzle, and anyone interested in the answer should focus on what’s happening in the manufacturing sector. Consider the job numbers released last week, which weren’t just disappointing, but also […] 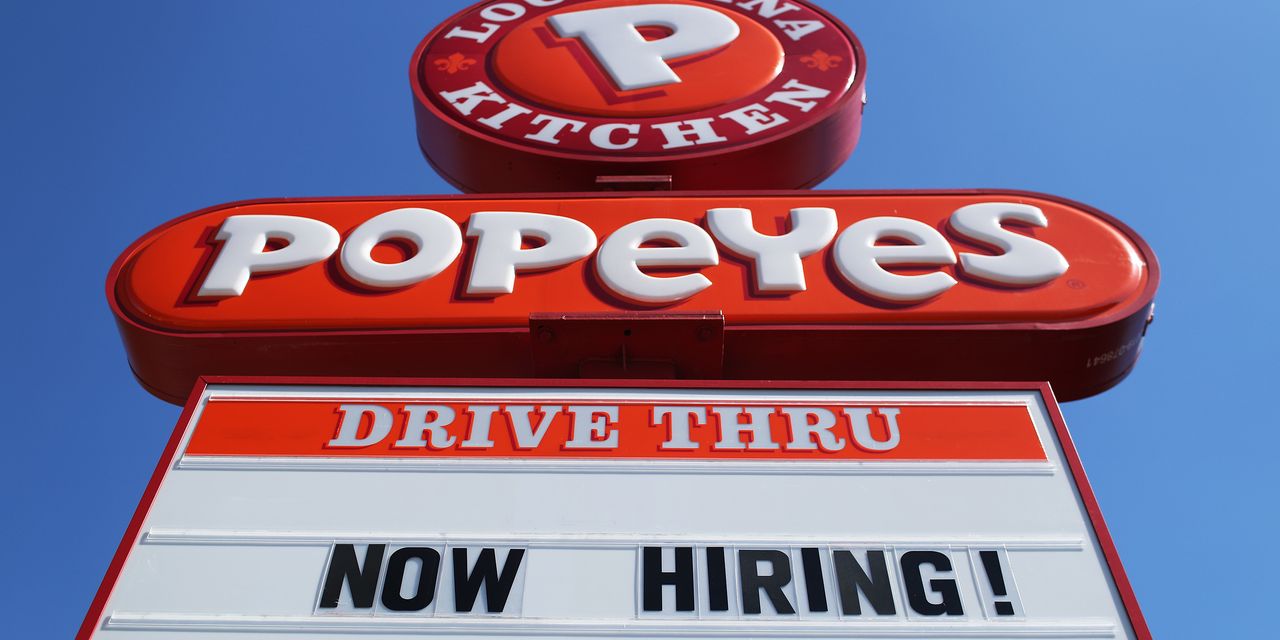