On this Cinco de Mayo (a minor holiday in Mexico celebrating the victory at the Battle of Puebla, but a sort of Mexican St. Patrick’s Day in the States), we see monthly private-sector payroll figures for the month of April from Automatic Data Processing ADP ahead of today’s market open. A headline of 742K new private-sector jobs were generated last month — impressive, but below the 800K analysts were expecting.

This difference was mostly made up in the +48K revision to March’s private-sector payroll total, now 565K. The trailing 3-month average of 490K jobs per month is now the highest level since last fall, and seemingly headed in the right direction. Goods-producing jobs in the private sector reached 106K for the month, while Services brought in 636K new jobs.

Leisure and Hospitality once again led the way with 237K new hires — though many of these may still be hire-backs from an industry decimated over the past year with “shelter in place” initiatives. Trade and Transportation came in with 155K positions filled, Professional and Business Services was 104K and Education/Healthcare hit 92K. Manufacturing generated 55K new positions, Construction 41K and Mining 10K.

Expectations for Friday’s nonfarm payroll totals are for a solid million new hires for the month of April, which would be the most since last August’s late summer reopening brought 1.58 million. However, with vaccinations continuing (but slowing) and states lifting their bans on public congregating just in time for summer, we expect these figures to only climb higher from here. Even if 1 million is not reached for the mark, we’ve already come a long way from -306K jobs posted in December.

General Motors GM is getting a lift from its Q1 earnings results this morning, even though the top and bottom lines came in mixed from Zacks consensus estimates: $2.03 per share nearly doubled the expected $1.02, more than 3x the year-ago’s 62 cents per share reported. On the revenues side, $32.5 billion missed the $33.26 billion anticipated by analysts, although full-year net revenues were guided higher: between $10-11 billion by the end of 2021.

This has made early traders bullish on GM stock during a morning when buying activity is taking advantage of improved valuations throughout the market. GM shares are currently up around 3.5% in early trading, and +37% year to date. Even with chip shortages projected to take a bit out of new auto deliveries everywhere in the industry, GM’s outlook is positive. The trailing 4-quarter average earnings beat is above 100%, and the company has only missed on earnings once in the past five years.

Questions or comments about this article and/or its author? Click here>>

More Stock News: This Is Bigger than the iPhone!

It could become the mother of all technological revolutions. Apple sold a mere 1 billion iPhones in 10 years but a new breakthrough is expected to generate more than 77 billion devices by 2025, creating a $1.3 trillion market.

Zacks has just released a Special Report that spotlights this fast-emerging phenomenon and 4 tickers for taking advantage of it. If you don’t buy now, you may kick yourself in 2022.

Want the latest recommendations from Zacks Investment Research? Today, you can download 7 Best Stocks for the Next 30 Days. Click to get this free report

Wed May 5 , 2021
Employers in the private sector added 742,000 jobs in April, according to payroll giant ADP, marking robust hiring growth as the economy bounces back despite the pandemic. Small businesses added 235,000 jobs, including 122,000 at businesses with between one and 19 employees, and 113,000 at companies with between 20 and […] 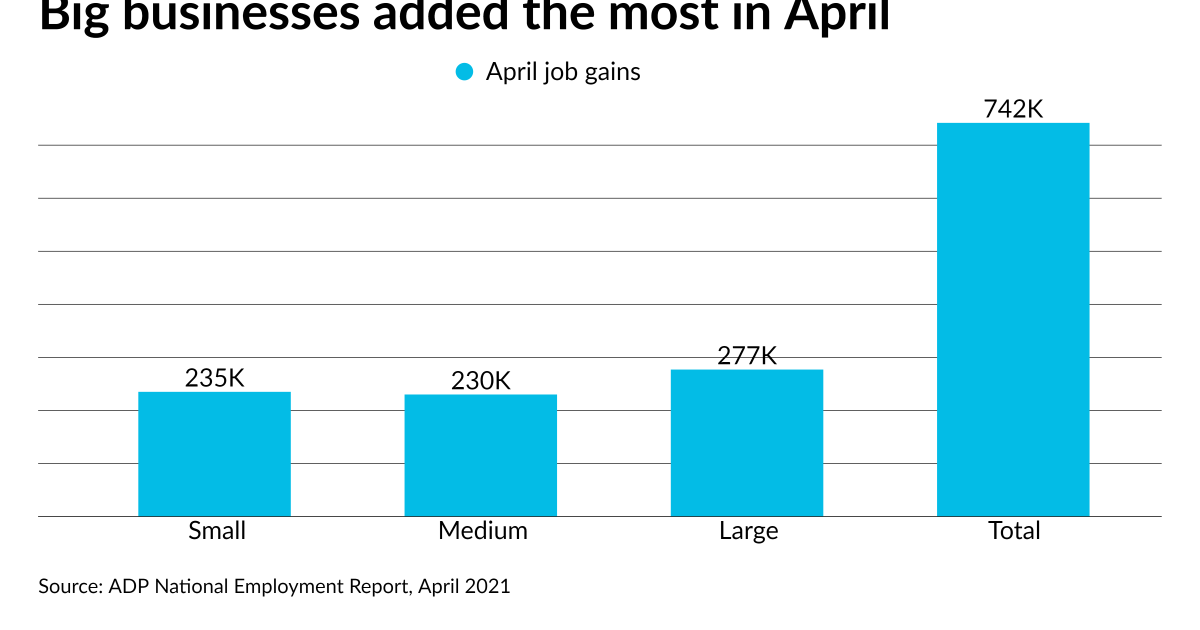