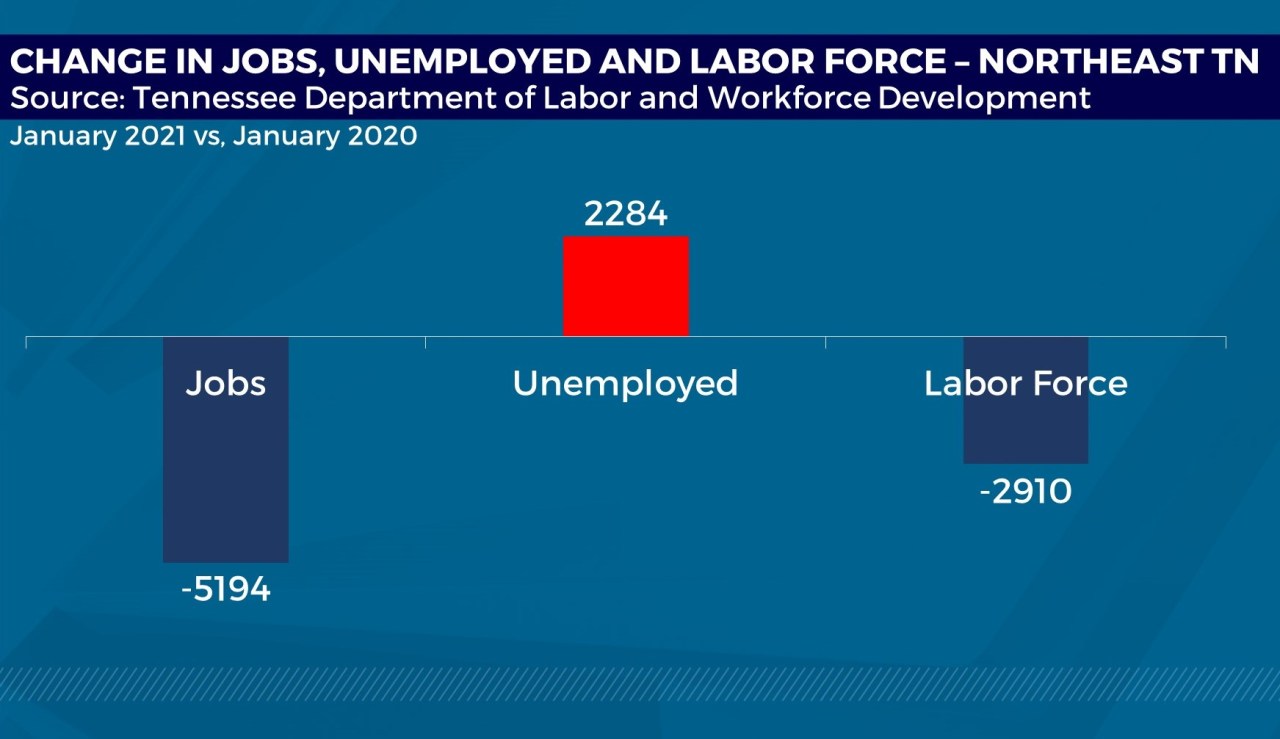 Most recent data show Northeast TN down 5,000-plus jobs from a year ago

JOHNSON CITY, Tenn. (WJHL) – One Johnson City man just found a better job after a full year of searching and submitting “resume after resume.” A local CEO, meanwhile, experiences trouble filling available jobs that start at up to $14.50 per hour, plus benefits, while some opt to stay on the sidelines while extra federal unemployment benefits remain available.

Those seemingly discordant facts are part of what make assessing the region’s jobs picture difficult. But the numbers definitely tell a story of an economy that still isn’t fully recovered.

From mid-May 2020 to around Thanksgiving, Northeast Tennessee’s jobs recovery advanced slowly but steadily.

Since then, with a few ups and downs, the jobs recovery brought total employment numbers closer to pre-pandemic figures according to Tennessee Department of Labor and Workforce Development (TDOL) data.

But in terms of continued unemployment claims, that recovery stalled in late November.

Thursday, a year after the last “normal” pre-pandemic weekly unemployment report from the Tennessee Department of Labor and Workforce Development (TDOL), continued claims were twice as high as the March 21, 2020 report.

New weekly claims were more than triple their pre-pandemic total.

However, job, labor force and unemployment data show the region at less of a disadvantage compared to early 2020.

The most recent monthly TDOL report, from January, showed nearly 5,200 fewer jobs than in January 2020, a drop of about 2.3 percent.

That compares favorably to the fall. In September and October the region had between 15,000 and 17,000 fewer jobs than the previous year – closer to a 7 percent decline from year to year.

That gap narrowed to just over 5,000 in November, jumped a bit in December and then returned to the 5,000 mark in January.

The surplus of job seekers was still enough to make one area man’s search for a career change much longer than he’d hoped.

Thursday, Josh Hagedorn was training for a new remote job he’d just started. That transition from work in college food service came months after he’d hoped it would.

“I continued to look and try at other places before we got called back but then I did just fortunately find this new position that lets me work from home, so that’s a blessing,” Hagedorn said.

In addition to weeks of unemployment when students went fully remote last spring, Hagedorn said he and colleagues endured a lot of stress when that work resumed.

“There was uncertainty, there was definitely rumors floating around, ‘would we stay open, are we gonna close’ as cases would pop up – some of that kind of stuff.”

Normally Hagedorn would be ready to get back to it after students returned from breaks. But the burden of an ongoing job search and the continuing uncertainty on campus contributed to a really tough year.

“It was a huge relief to take that break and then there was a question after holidays and travel, ‘would we go back,’ so it was back into the same questions, and once we got back, would we stay open.”

All the while, Hagedorn was continuing to put out feelers.

“It almost took a year to find something and to get a response back,” he said.

“I sent out and thought that I’d get quite a few different opportunities but (they) did not come through.”

Asked whether that got discouraging, Hagedorn gave a heavy sigh and paused.

“Definitely. Sending out application after application, resume after resume, all the work that goes into preparing those things, thinking that you’d be a great fit for something, not getting selected — it’s definitely a blow to the ego but it’s also hard to keep it going sometimes.”

‘Competing with the federal government for employees’

The pharma company specializing in dermatological products and topicals snagged a big contract to produce hand sanitizer as the pandemic took off. It moved from about 325 employees at the beginning of 2020, to about 450 today.

But even when the unemployment rate was in double digits, Bedard said additional federal unemployment benefits that equated to $15 an hour — on top of much-less-generous state benefits — made it hard to hire and retain production workers.

“Our starting wage depending on manufacturing ranges from $12.00 to $14.50 per hour plus significant benefits,” Bedard said.

“Many have told us that they prefer to wait until closer to the unemployment running out before they go back to work full time.  So it continues to be an issue for us.”

That initial $600 weekly federal benefit is now $300, but it will last until September.

That equates to $7.50 an hour. Combined with Tennessee’s maximum weekly benefit of $275, it still leaves some people with the opportunity to collect an amount near the top end of Crown’s starting production salary.

To get that payment, unemployed workers must engage in job search activities. But Bedard’s experience tells him that requirement can essentially be gamed.

“The quality of talent we are attracting and that are staying with us is better compared to 2019, but we feel there are still a large number of people on the sidelines not currently actively ready to rejoin the workforce,” Bedard said.  “They are applying because they have to for unemployment benefits but they are not showing up for the interview process.”

Bedard said Crown’s experience isn’t uncommon and that the issue is probably even more challenging for employers with lower base wage rates than Crown.

“It is still an issue as the employee pool looking to work is not large enough for the number of job openings in the region.”